Make love, not war: Even as young Americans proudly advertised that mantra on their person more than 30 years ago, some of their peers knew that equally as many people were into the scene for the free drugs and casual sex as for the politics, if not more so. 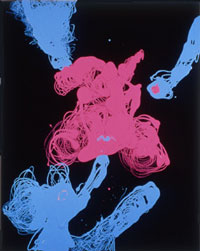 Not everybody needed an Altamont or Watergate to see through the veneer of good intentions. Unfortunately, in the years since, cynicism, irony, and apathy have become the sine qua non of American culture, and it’s turned sincerity into an endangered species. What’s worse, those willing to try earnestness on for size look like fools who can’t be taken seriously. These days, unaffectedness needs an emotional rescue.

Sean Slattery and Hills Snyder, whose works are currently on view at Angstrom Gallery, toss out two lifelines to honesty without looking like recidivist chumps in the process. Granted, these two separate one-man shows by artists who have some professional similarities — both write about and curate shows, Snyder at Sala Diaz in San Antonio and Slattery as Assistant Director at Angstrom itself — aren’t explicitly related. But their seemingly disparate works share a contemporary slyness as well.

Slattery’s sneakiness is the more easily grasped of the two, but it’s no less sophisticated. Just don’t mistake Slattery’s seven oil-and-spray-enamel-on-canvas paintings as hot-color-keyed abstract works. He refers to his imagery as “personality portraits,” and that description aptly conveys the mixture of emotive resolve and figurative insinuations that his works convey. 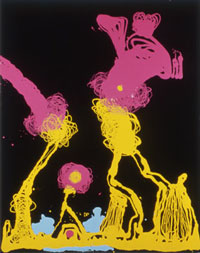 His canvases are swirling morasses of bright oil enamels — different combinations of yellow, blue, orange, pink, and fuchsia — applied to glossy black backgrounds. The shapes his colors form — with all the different textures and occasional air bubbles that his process produces — become otherworldly, though somewhat recognizable, visual prompts. Some of his images have accessible referents — this is why events unnerve me looks like a fuzzy video game. Others, like standouts the best you can hope for is to die in your sleep — a tangle of red seemingly being absorbed by a nebulous onslaught of blue — and heaven knows it’s got to be this time don’t so much imply actual forms as much as they extract a mood. Slattery’s work elicits a personal response without having to use a vocabulary that automatically provokes easily accessed assumptions.

It’s a process that’s intimately tied to his color choices. His use of a vivid palette set against the black background makes his shapes pop off the canvas, lending them a physical tactility that images on white lack. It causes his paintings to feel more like objects, and it forces you to read them in ways you don’t usually use for two-dimensional visuals. He doesn’t want to tell you how to feel, but the work does provoke you to respond.

Snyder’s Green Glasses is a different beast altogether. The title refers to the “un-rosy shades” worn by Maximilien Robespierre, one of the principle figures of the French Revolution. For Snyder’s purposes, it allows him to appropriate visual emblems of an era past and refract them through a pop-qua-conceptual prism. He refers to his technique as “Hand Not Hand,” whereby the accoutrements of modern technology interact with the deliberate actions of the artist to yield a creative product that exists in the present even though it alludes to different eras. In this case, those overlapping times and ideas are the imagery of the late-18th century, the pranksterism of Dada, and the plasticity of pop. 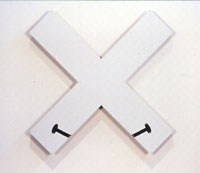 That blueprint is immediately apparent, even if some of the works aren’t. You won”t miss the acrylic-sheet-on-wall-with-cutout Back to Basics, a floor-to-ceiling primary color guillotine. Less conspicuous is Take Me to Your Leader, a small wall drawing of a key mounted less than a foot from the gallery’s high ceiling. The blue-and-white striped Asteroid hangs in plain sight, as does the white X of Blind Man” Bluff, the white bathtub with cutouts Site, and the reflective green, peasant-figure silhouette Doppler, all of which are made from similar materials. And then there’s Festoon, a line carved directly into the gallery’s wall.

In all of Snyder’s work his caustic wit hits you first. The ebullience with which they were made translates into comic relief on the wall — the imposing, frightful economy of death symbolized by the guillotine becomes something that looks like it could be made out of Legos. When the wit isn’t immediately apparent, something else about the presentation emphasizes it, as when a glance at the show’s list reveals that Festoon includes “dust remains” as a material and notes that its price “includes installation.” But how these works are comical is less interesting than why Snyder may have created and exhibited these images in this manner.

The best answer to that question runs through Site, the white bathtub with circular cutouts revealing red beneath them. It is, without a doubt, an allusion to Jean-Paul Marat‘s bathtub, where the revolutionary was slain. But its layers of meaning are more provocative than mere postmodern synecdoche.

Specifically, Snyder’s Site is an update of Jacques-Louis David‘s 1793 painting The Death of Marat, in which the bathing physician-turned-radical journalist sits in a tub of blood-tinted water. David, the propaganda agent of the Revolution, met with Marat the day before he was knifed by Marie Anne Charlotte Corday D”Armont. (For her efforts, the 24-year-old Mademoiselle Corday was beheaded four days later.) For this portrait, David placed Marat’s tub in a nonspecific place — the background and foreground are dark areas, indicative of nothing in particular. It’s a choice that emphasizes the scene, Marat killed, more than the context.

David made other significant choices. All the objects in it — the tub, the block on which a quill and inkwell rests, the letter on which Corday tells Marat why she killed him (a David addition) — are rectangular. The only round shapes in the image are those used to represent Marat himself — his shoulders, his head, his very physicality. (Hence Snyder’s impressive economy of means to suggest Marat through the red circles in his piece.) It all emphasizes the dead man.

Very briefly, Marat, along with Georges Danton (leader of the Jacobins) and Robespierre were the most prominent and controlling men on the Committee of Public Safety that was appointed by the National Convention to oversee public interests in Paris. Marat was assassinated, the Reign of Terror began, Robespierre had Danton executed, and Robespierre eventually suffered the same fate. (Ultimately, the French Republic came to be controlled by a wealthy middle-class.) During this time, David’s Marat was exhibited in meeting rooms, and Convention leaders wanted it to replace crucifixes and royal portraits as the image of the new France. It was the main element that transformed the politically dubious Marat into a hero and martyr.

That transforming — or in the case of Marat, nearly transubstantiating — power of visual iconography is at the core of Snyder’s work. He fuses historical and visual elements to precipitate powerfully daunting ideas that linger once you see beyond his humor. The X-shape of Blind’s Man’s Bluff is actually a white, smiley face that recalls the don’t-worry-be-happy era of a different Bush administration from which four pie-slices have been excised. That fact turns its title into a sinister admonition: Those who don’t question what they’re seeing may foolishly believe nothing’s wrong. Similarly, the decorative drapery of Festoon is carved directly into the building that exhibits it, becoming as literal an evocation of biting the hand that feeds if there ever was one. As for Take Me to Your Leader, remember: In order to see it, you have to tilt your head back and look up. In the process, you strike the pose of a reverent citizen peering up at the balustrade from which the proclamations of government are dictated. Given your stature, you”ll never touch the key that unlocks that power in this lifetime.

That healthy questioning of the status quo ties these two artists together. Slattery’s oblique approach moves from point A (the sign = his imagery) to point B (what it signifies = an emotional response) by refusing to use the traditional tools of visual provocation. Snyder’s droll fusion of forms asks you to uncover the arbitrary nature of the cultural connotation of meaning for yourself. And both pose the sort of pertinent queries that, in less apathetic times, could be the kind of the rally cry that sparks full-on, passionate, and bloody revolutions in thought.

All images appear courtesy the artists and Angstrom Gallery. 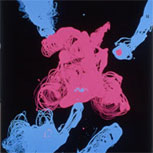