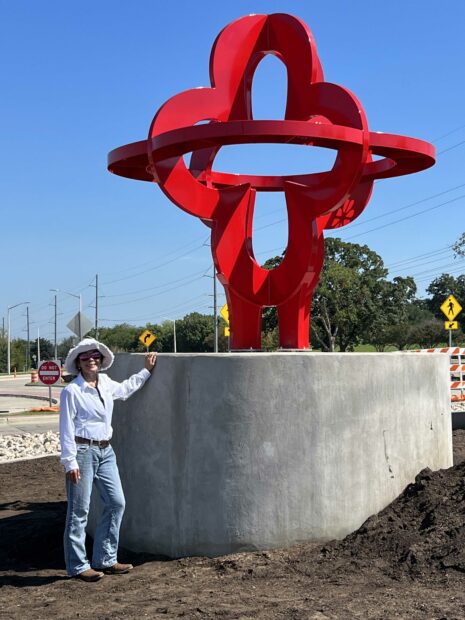 Elizabeth Akamatsu with “Dog Star,” Image courtesy of the artist.

Nacogdoches-based sculptor Elizabeth Akamatsu’s sculptures have been featured in outdoor installations and public displays for years. An active member of the Texas Sculpture Group, her works have been included in Boerne’s Art al Fresco, Coppell’s Old Town Art Splash, Dallas’ Art on Henderson, and Marble Falls’ Sculpture on Main. Public art has and continues to play a large role in Akamatsu’s artistic practice, including several recent projects. Most recently, she completed the installation of a permanent sculpture for the City of Denton.

“When I heard about the opportunity to create a sculpture for a roundabout in Denton, I was so excited, as Denton has held a warm spot in my heart for many years,” said Akamatsu. “Denton was the first city to accept my art in an exhibition.” 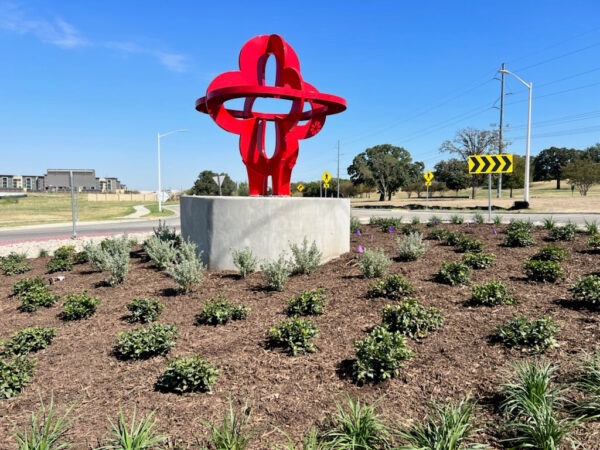 Dog Star, commissioned by the City of Denton’s Public Art Committee, was recently installed in the center of the Bonnie Brae Roundabout. The work is inspired by Sirius, also known as Alpha Canis Majoris or the Dog Star, which is the brightest star in the universe. The red, spherical sculpture sits on a raised concrete pedestal in the middle of the roundabout. Constructed out of steel, the work features both vertical and horizontal cutouts that offer visitors a changing view as they drive around. These also allow evolving shadows to be cast as the sun passes overhead throughout the day. The sculpture’s platform is surrounded by greenery and will eventually be lit for nighttime viewing.

“Dog Star looks like one big star, but it is actually made of two small stars rotating in opposite directions,” remarked Akamatsu. “This, in my imagination, is similar to the image of cars circling a roundabout.” 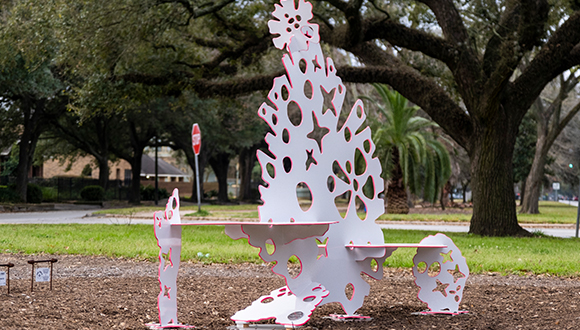 Another one of Akamatsu’s sculptures can be currently seen in Houston. Included as part of this year’s True North sculpture project, which takes place on the Heights Boulevard’s esplanade, Cumulus draws its title and inspiration from the clouds. Painted white with pink edges, the abstracted metal sculpture, much like the clouds, allows the viewer to form their own opinion of what it represents. 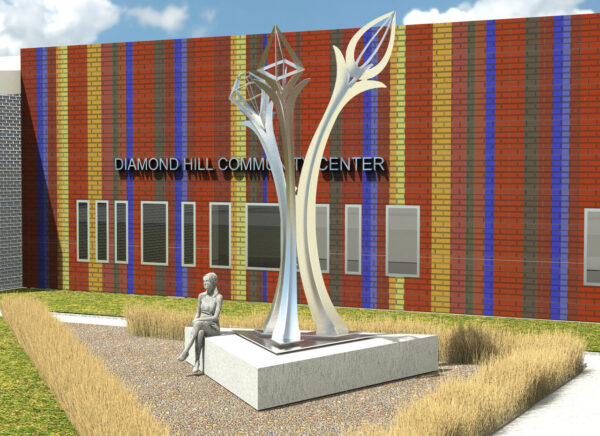 Akamatsu also just completed the sculpture Rising Strong, which is slated to be permanently installed by Fort Worth Public Art in spring 2023, following the completion of the new Diamond Hill Community Center (DHCC). Consisting of three stylized flowers made of stainless steel, Rising Strong is a nod to the neighborhood’s community, drawing inspiration from the idea of planting seeds, developing roots, and growing. The work will be placed in front of the DHCC, near its entrance, on an elevated concrete pad.

“Public art is important, as it gives those who normally would not go into a museum or gallery an opportunity to see art, and it beautifies and enriches the community,” said Akamatsu. “Making a large public sculpture takes a village. There are many parts of making public art, such as working with the community to create something that speaks to them, working with city planners, and working with others who help in the production of making my dream a reality.”