This year marks the ninth round of temporary installations launched by True North in collaboration with the Houston Heights Association — a nonprofit sponsor and steward of the Heights Boulevard’s esplanade. The project is also conducted in partnership with the City of Houston Parks and Recreation and Public Works Departments, the Houston Mayor’s Office of Cultural Affairs, and the Houston Arts Alliance.

Initiated in 2014, True North has become a project beloved by the many walkers, joggers, shoppers, and others who regularly traverse Heights Boulevard. In a press release announcing this most recent round of artists, Gus Kopriva, owner of Redbud Gallery and one of the five team members behind the project, stated, “Art adds an economic value to the area through inward investment and tourism and fosters vivid pride, confidence and quality of life.”

Learn more about the sculptors whose works will be on view from March through December 2022 via their biographies below, provided by True North. Images of the sculptures will be available next month. 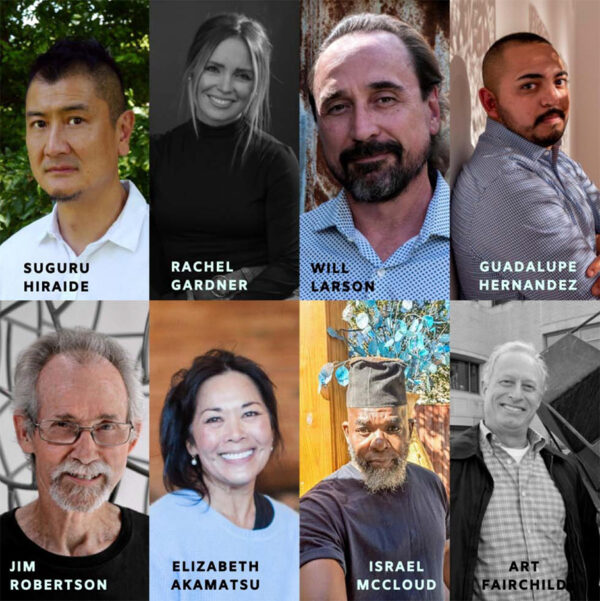 Art Fairchild, Dallas
A resident of North Texas for most of his life, Art Fairchild’s creative nature and aptitude for conceptualization and engineering were clearly apparent from an early age. He has always loved working with his hands and possessed an avid intrigue for construction and a deep-rooted desire to discover how things worked. In his youth he learned to paint with oils, produced numeral pencil sketches and sculpted with clay. During his college years, this overwhelming interest led him to major in art and later build a successful full-service trade show design and production business—using his creativity, engineering and craftsmanship to produce nationally-renowned exhibitions for high-profile clients—and all the while creating his own works of art.

Rachel Gardner, Houston (Heights)
Rachel Gardner received her BFA from Stephen F. Austin State University and M.F.A. from Houston Baptist University. She is assistant professor of sculpture at Houston Baptist University and a mixed-media artist specializing in sculpture and painting—her home and studio located in the Houston Heights. Gardner’s works have been shown in museums and galleries throughout the United States and internationally.

Guadalupe Hernandez, Houston
Houston-based artist Guadalupe Hernandez was born in San Miguel de Allende, Guanajuato, Mexico, and received his BFA and M.F.A. from Houston Baptist University. His works explore aspects of his Mexican identity through the lens of people, places and memories from his childhood in Mexico and have been exhibited in several museums and juried exhibitions, including Houston Holocaust Museum. Hernandez has participated as a Changaritto artist in residence with the Mexic-Arte Museum, an Artist on Site with the Asia Society Texas Center (where he created a large-scale Papel Picado installation) and a Summer Studios Resident with Project Row Houses.

Suguru Hiraide, Wichita Falls
Suguru Hiraide teaches sculpture and metals as a tenured professor of art at Midwestern State University, Wichita Falls. He was born and grew up in Okaya City on the shores of Suwa-ko (Lake Suwa) in Nagano Prefecture in Japan and moved to the United States in 1993, where he studied sculpture and received his BFA from West Virginia University and M.F.A. from California State University. Hiraide has shown his work nationally and internationally, including solo exhibitions in Dallas, Houston, Los Angeles and Tokyo, and in international group shows at Tokyo Metropolitan Art Museum, Fukuoka Asian Museum in Fukuoka and Kanagawa Prefectural Gallery in Yokohama, Japan.

Will Larson, Austin
Will Larson studied at San Antonio Art Institute and obtained his BFA in sculpture at Kansas City Art Institute. After spending the following two years at Academy of Art and Design in Braunschweig, Germany, Larson returned to his hometown of Austin, where he runs his business in architectural steel fabrication and creates sculpture of his own. Larson’s focus is in public art and has completed commissions in Austin and San Antonio. He was project manager for international artist Bill FitzGibbons on large-scale projects and worked closely with Bob “Daddy-O” Wade for over 20 years on installations throughout Texas, including Wade’s