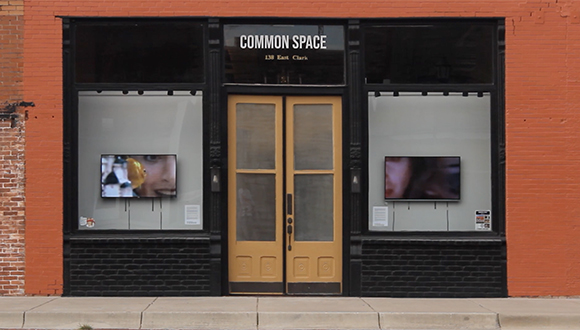 “This exhibition, titled Re-Release, takes sampled media and stretches it across two fifty inch monitors. The footage used in Re-Release is taken from the beginning of The Little Mermaid VHS tape. The voice of Ariel, Jodie Benson, talks to two CGI fish about the upcoming projects Disney has planned for home release, theaters, television, and maritime enjoyment. Re-Release utilizes every instance that Jodie is on screen and meshes different scenes creating a somewhat familiar but off putting image of a human face. With this, the televisions are tapping into the concept of the television as a body.

Producing recognizable forms in the format of television shows, news broadcasts, movies, and much more, the television has acted as another member of the family that holds attention, conversation, and comfortability for years. Even though this idea stems from television’s predecessor radio, the formal design of the television coupled with the recognizable forms broadcasted to millions essentially classify the piece of machinery as another member of the family.

With this project, the concept of “television as a body” is taken literally. Separating the footage into two monitors, the face both resembles and falls short of a recognizable human face. It is in this space that the televisions acting as “members of the family” cycle between discernable and indistinguishable.”