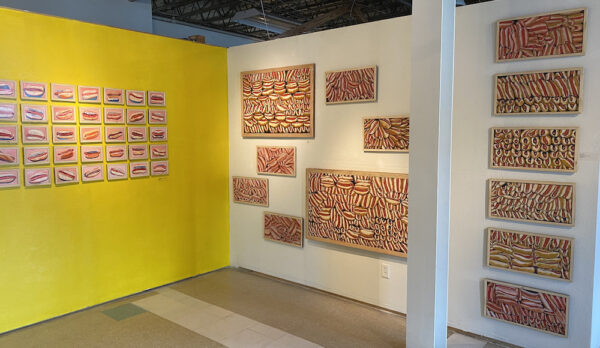 Inhaling nearly eight hot dogs per minute, Major League Eater Joey Chesnut set a new world record earlier this month at the July 4th Nathan’s Best Hot Dog Eating Contest by eating 76 hot dogs — beating his prior record of 75 — in 10 minutes. Beaumont painter Kevin Christopher Clay, inspired by the hundreds of dogs Chesnut and other competitors scarf down, has painted 164 hot dogs. By grouping his works in three series and a large-scale painting, Clay’s exhibition HOTDOG!, on view at the Arts Studio, Inc. in Beaumont, examines the uneasy underbelly of the industries that mass produce weenies and Major League eating competitions, as well as explores the painterly possibility of the American classic.

The exhibition gallery invokes the contest arena, with the color for the yellow accent wall plucked from Nathan’s Best weenie packaging. The Platter series (2020) specifically references scenes from the Major League Eating competition —  Clay’s works in this series focus on the platters of hot dogs that are set in front of contestants to gorge upon during the ten-minute competition period. The gallery wall includes two different hangings of these works, with the vertical hanging on the right playfully presenting a nine-foot tower of stacked dogs. The eleven works in this series vary in both Clay’s arrangement of the stacks and the color palette, with some paintings appearing more expressive with looser brushstrokes and a larger range of pink tones used in the depiction of the bread. 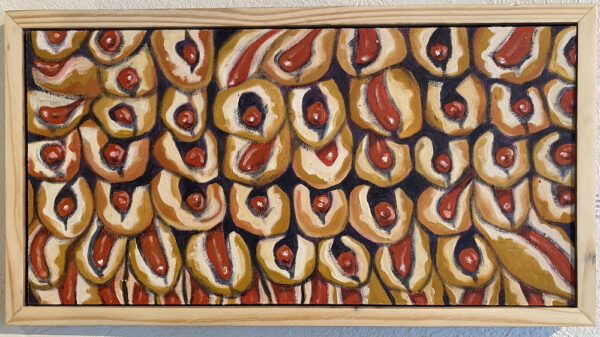 In both the Platter series and the two larger works on the same wall, Feast #1 (2020) and Feast #2 (2020), the close-cropping of the banquet of buns and meat result in compositions as innocuous as chrysanthemum petals, to the uncanny — tips of weenies mimicking eyes return the viewer’s gaze. The claustrophobic effect of the tight positioning of the hot dogs, not unlike images of livestock crammed in factory farming facilities, the works in this series calling on viewers to consider the ethical implications of our consumerism. 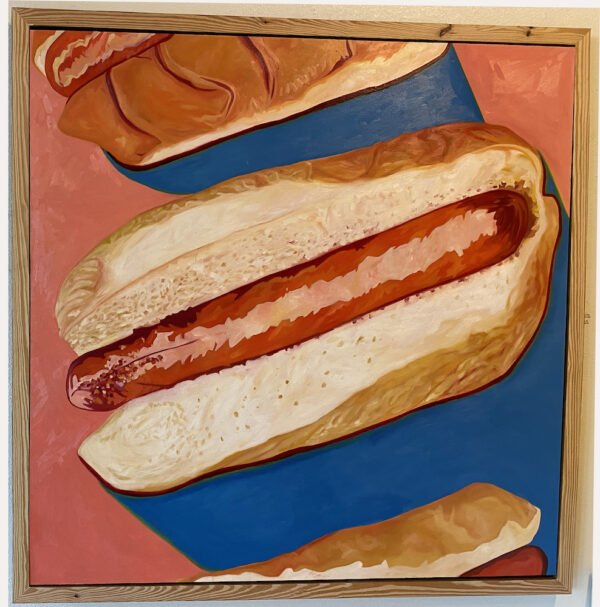 The other works in the gallery redeem the hot dog from its base role on the stages of eating competitions by celebrating the icon through its ability to stir feelings of nostalgia. A large format oil painting called Three Dogs (2020-2021) plays with scale as Clay zooms in on a cropped perspective of three massive hot dogs, the central bun and weenie bisecting the picture plane in bold fields of color. Blocks of blue shadows project from beige buns and red weenies. Thick, dark lines on the bun of the top dog function as a Proustian Madeleine — one can almost smell the opening of a fresh bag of hot dog buns and be transported to backyard BBQs or the cafeteria of an elementary school. 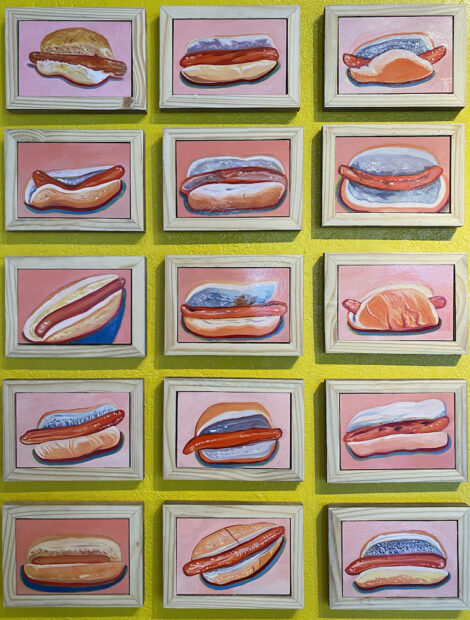 On the yellow accent wall, viewers encounter 75 individual oil paintings that form the series Nathan’s Hot Dog Second Cycle Complete 1-75H (2019, 2021). Gleaned from images of hot dogs on the internet, Clay posits his subjects against a millennial pink background. The color palette of this series invokes those found in American confectionary still-life paintings by Wayne Thiebaud. Individual sets of franks and buns, painted with the subject positioned horizontally and diagonally, emulate elongated nudes of Rococo French salons. Expressive brushstrokes capture the varying appearances of the dogs — the variety of ways in which they have been prepared — with some sausages stamped with the charbroiled marks of the grill while others appear plump and pink as if they were boiled on the stovetop for a toddler’s lunch. 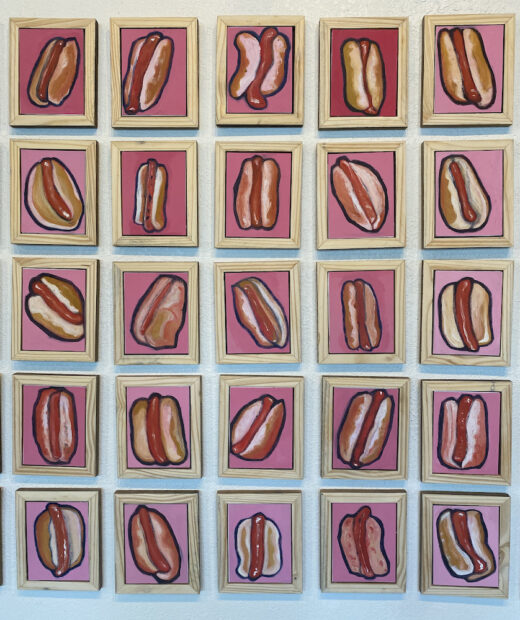 Another series of 75 individual hot dog paintings, Nathan’s Hot Dog First Cycle Complete 1-75A (2020), exhibited on a different gallery wall, are both more graphic and rendered in a more restrictive color palette compared to the works painted in oil. Bold, organic outlines and stark contrasts between the deep pink background, the weenie and the bun are painted in chunky, but controlled, swatches of acrylic gouache and wax medium. The combination of the flat forms of cylinders formed from the vertical positioning of the subject propose a potential hot dog typography, with letters formed from curving and intersecting lines of weenie tucked in bread. 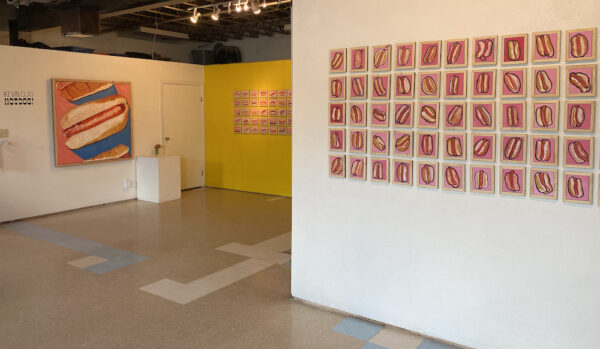 The subject of Clay’s works appeal to both viewers’ sentiments, and as a challenge to slow down and recognize the elementary-school cafeteria staple as not just mass-produced cylindrical beef to scarf down with lemonade in front of a crazed audience during a hot dog eating competition. By stripping the hot dog down to its material basics of meat and bun, as well as its basic visual forms of cylinders and circles, Clay’s works assert a dual nature of this icon. Nathan’s Classic Hot Dog Eating Competition may exploit the hot dog as a symbol of American exceptionalism, but Clay’s paintings spotlight the deeply personal connections human beings make with food.

Through July 31 at The Art Studio, Inc., Beaumont