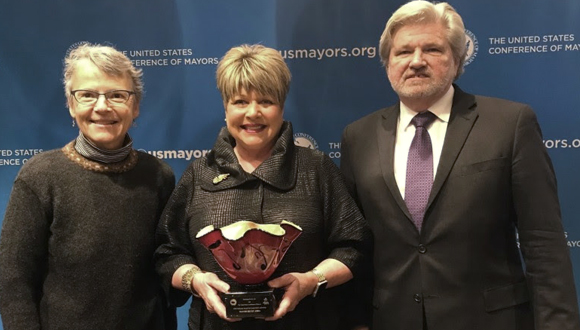 Beaumont, Texas Mayor Becky Ames has received an Americans for the Arts and United States Conference of Mayors 2020 Public Leadership in the Arts Award for cities with a population of 100,000 or more. The award, given by Texans for the Arts on January 24 at the U.S. Conference of Mayors Winter Meeting in Washington, D.C., is for Ames’ support of the funding, operations, and maintenance of historical and cultural assets owned by the City of Beaumont. Some of those sites include the Jefferson Theatre, The Art Museum of Southeast Texas, and the Julie Rogers Theatre.

Upon the awards’ announcement, Tom Cochran, CEO and Executive Director of The U.S. Conference of Mayors, remarked: “The U.S. Conference of Mayors is pleased to recognize the exemplary work of Mayor Ames, Mayor Techel, and Governor Inslee as they use the arts and culture to not only promote their city/state, but to grow their economies. Mayors understand the inherent value of the arts to bring people together, promote cultural understanding, and make cities safer places to live, work, and play.”

Robert L. Lynch, president and CEO of Americans for the Arts, added: “Each leader awardee has demonstrated ongoing dedication to the development and support of arts and arts education programming. Their vision and commitment to supporting creativity has played a vital role in enriching the lives of citizens of all ages and backgrounds.”

Awardee Mayor Ames states: “I believe that public art enhances our city in so many ways … from a quality of life standpoint for our citizens, to raising awareness of our local talent along with driving economic development. I have seen firsthand how even small art projects can enhance community pride and ownership. It’s difficult to explain how proud I am of everyone that helped us get to the point to receive this award and I am confident that we will continue to elevate the arts in our proud city.”

For more on Texans for the Arts,  please go here.

Texans for the Arts Urges Arts Organizations to...