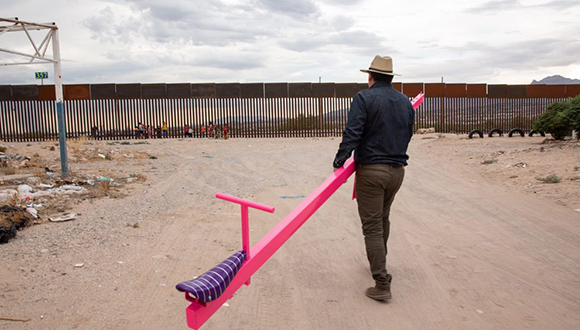 Ronald Rael and his temporary architectural structure “Teeter-Totter Wall” at the U.S.-Mexico Border.

Ronald Rael‘s Teeter-Totter Wall, which we wrote about back in the summer of 2019 (installed in Sunland Park, New Mexico, near El Paso), was just named Design of the Year 2020 by The Design Museum in London. Of his design — which was nominated alongside 70 others including the 3D rendering of the Covid-19 strain, the film Parasite, and a stab-proof vest designed by Banksy — Rael wrote on Instagram: “We are totally surprised by this unexpected honor, which we share with the Juarez based art collective, @colectivo.chopeke. Most importantly, it comes at a time when we are hopeful for change and that we start building more bridges instead of walls.”

Rael, the Eva Li Memorial Chair of Architecture at The University of California, Berkeley, worked on the project in a series of  conceptual drawings over the past decade with co-designer Virginia San Fratello, an Associate Professor of Design at San Jose State University. The original concept for the Teeter-Totter Wall was to demonstrate the delicate balance between the U.S. and Mexico, and as Rael describes it, “Where the actions on one side have a direct consequence on what happens on the other side.”