A Visit to MuseoBenini in Marble Falls 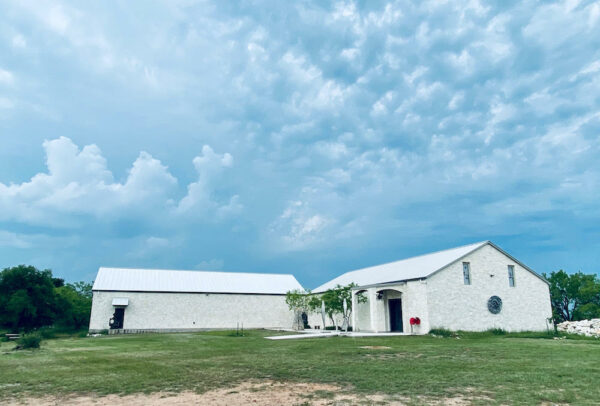 Texas Hill Country may be known for its German cultural heritage, but what about the Italian guy with his own art museum in Marble Falls? Known simply as Benini, the 79-year-old painter and sculptor established MuseoBenini, a 6,500-square-foot structure housing his life’s work, in 2015. It’s a single-artist “museum” where the artist is not only alive, but actively producing — Benini prefers to paint all through the night. 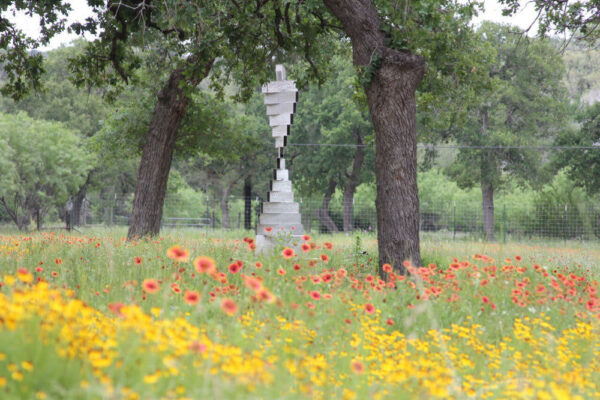 The name Benini may ring a bell: for nearly 15 years, he and his wife/business partner Lorraine ran a massive sculpture ranch in Johnson City which featured 135 large-scale international contemporary pieces. MuseoBenini, however, has a different vibe. The smattering of outdoor sculptures are more of an aesthetic backdrop as you make your way to the main event cloaked in white stone. 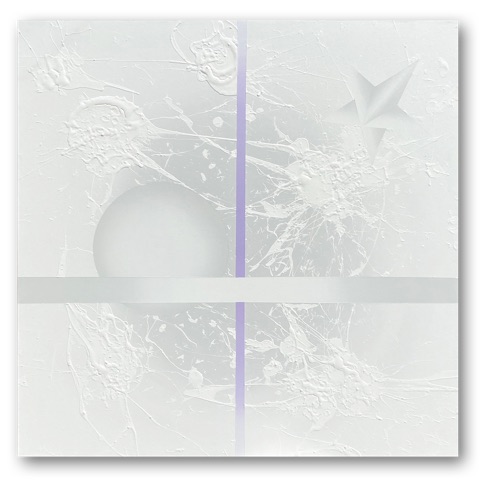 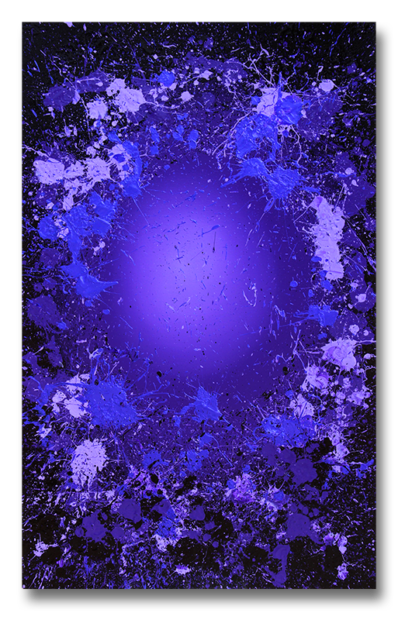 Entering the museum is like entering a church, starting with a heavy front door that’s hard to push open. Inside, sunlight pours through the high-ceilinged space in momentary silence as the CD player changes jazz discs. And if this gallery is a chapel for art, then Benini’s paintings are its stained-glass windows. Hypnotic orbs float with precision in recent works such as Notes Within the Silence (2020), while the Face of God (2012) series explores color and chaos expanding outwardly from the uterus into the universe. 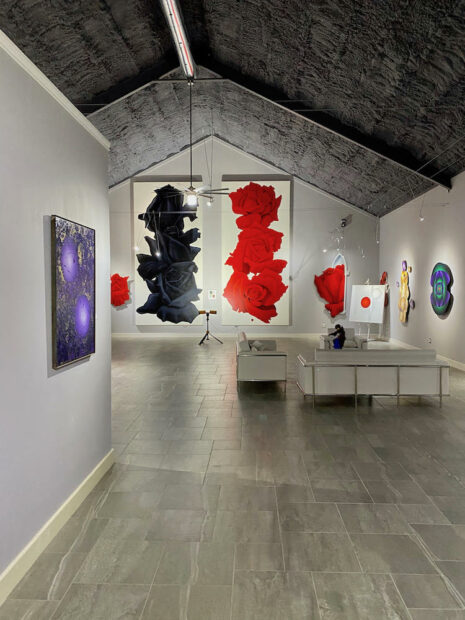 Benini’s signature roses fill the back gallery, with two in particular hanging on the wall like patron saints. Time Seen Through the Inner Eye Turns Black (1985) and Time Seen Through the Inner Eye Turns Red (1985), both 18 feet tall, were publicly unveiled in Orlando to commemorate the city’s 110th anniversary that same year. At the time, roses were a major theme in Benini’s work, both for their symbolic power and their richness in color and shape. 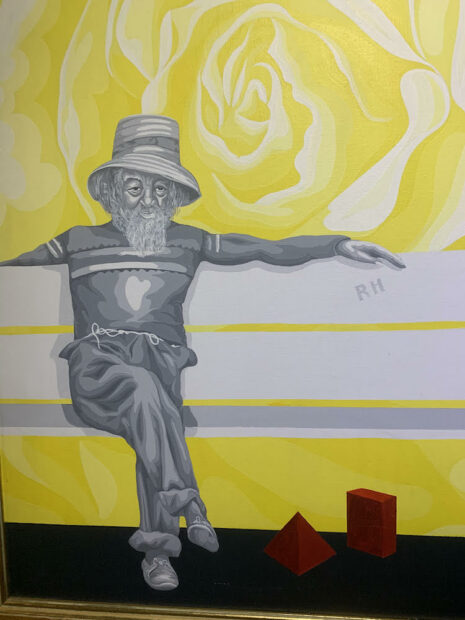 His figural paintings from the early 1970s ripple with nudes and semi-nudes, as well as Christ and Christ-like figures. In Morning (1970), a man relaxing on a bench appears to have the Sacred Heart emanating from his striped t-shirt. A yellow rose envelops the background, its petals forming a soft vortex, as geometric objects placed at the man’s feet hint at the metaphysical.

Gifts From My Easel is a series of framed art detritus — pieces of canvas which once protected the wall from his own paint droplets, which, unbeknownst to Benini at the time, had created interesting art compositions. The Blessed Rain (2019) is a playful reminder that human beings often construe meaning out of nothing. 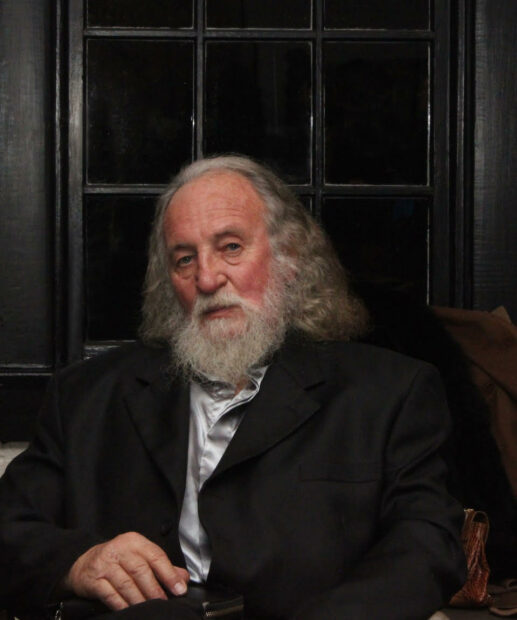 Benini was born in Imola, just outside of Bologna, in 1941; his earliest childhood memories are ashen with the bombings of World War II. In school he was an avid reader and became a self-taught artist, copying images from the Bible at the encouragement of his teacher. He left home at 15 to become an itinerant artist, painting traditional still lifes and landscapes in the countryside in exchange for meals and a place to sleep. “I sold for whatever they would pay me,” he says on the phone a few days after my visit, his Italian accent surprisingly soft.

When the rainy season arrived, Benini left the countryside and went to Milan, where he made money as a busboy, frequenting the city’s art museums and bohemian bars. Looking back, he tells me, every city has those same artists, drinking cheap wine in those same bars, thinking they’re better than one another. “Paris was the typical example of artists all playing by the same rules,” he tells me. “I came to the point where I couldn’t make it in Europe, so I went out to sea.”

Benini first encountered America via the Caribbean, while working on transatlantic cruise ships. Eventually he moved to the region and settled in Freeport, Grand Bahama. “Unlike Jamaica, the Bahamas had never established a painting tradition,” he explains. “I was the only painter.”

His art career took off and he started showing in America and Europe. A gallery on New York’s Upper East Side began representing his work. The price for his paintings went up, but so did the gallery’s cut, an arrangement which fueled Benini’s disdain for the New York art world. “As an artist, I had become a servant, not to the public, but to a dealer.”

He quit drinking, stopped painting, and laid low in Freeport. After six months, he resumed painting (but not drinking) and swore off commercial galleries. He decided only to show at universities and public institutions. “I’ve always walked a very tight rope for the many rules I’ve imposed upon myself.”

Benini moved to Florida in 1978, where he met his wife Lorraine. They bought a shack on the St. Johns River, which, like the Nile, he tells me, is one of the few rivers in the world which flows north rather than south. He fell in love with what most Floridians would find inconceivable: the swamps in the area, their stunning black and green colors.

“There are no swamps in Europe — Mussolini drained all the swamps,” he says dryly.

Benini didn’t sell a single painting for five years. But then one day an older, affluent woman from Orlando purchased one of his black rose paintings — and it turns out she had a lot of friends. “All of them came to my place in the swamp,” he laughs. “They all started collecting.”

In the late 1980s, Benini and Lorraine relocated to Hot Springs, Arkansas, setting up shop once more. As I listen to him, I grow curious about this journey into the South rather than a city like New York or Los Angeles. I ask Benini which society is better for an artist. “Society is nature!” He exclaims. “I always pick where I will live based on nature.”

Benini and Lorraine headed to Texas in 1999 for their Johnson City sculpture ranch, an estate once owned by Lyndon B. Johnson himself. When they moved to Marble Falls 15 years later, Benini discovered it was down the street from Dead Man’s Hole: a 15-story drop straight into the earth where local vigilante secessionists tossed the bodies of suspected unionists during the Civil War.

Hill Country seems like a long way from Imola, Italy, the same region where Mussolini once rose to power, and a city later invaded by Nazis. “The northern region where I came from was wealthy; it was controlled by Socialism,” he explains. “The southern part was poorer, and it was ruled by the Catholic Church.” 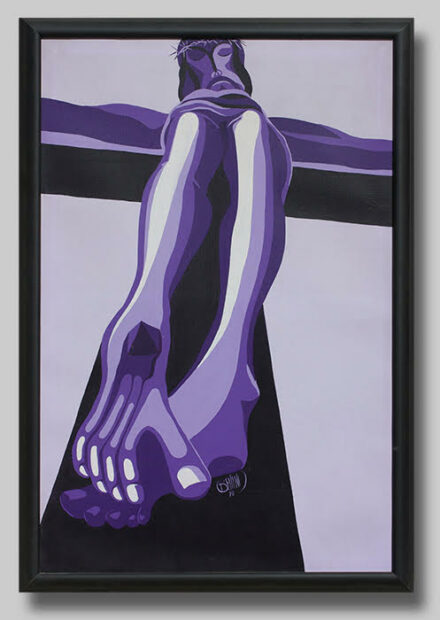 Benini then tells me he can’t stand the evangelical pastors in America, with their good head of hair and cheap polyester suits. Sweating like politicians. “They’ve lost their ability to reason with logic.”

The partial lettering of a Walgreens sign hangs apocalyptically from a tree on the 35-acre estate. The installation is called He Kept Telling his God ‘Please Give me a Sign,’ and directly pokes fun at religious faith, if not American hucksterism.

Benini and his wife considered leaving the Hill Country after their time in Johnson City, but after scouting other areas of the country, they decided to stay put: “Every time we came back to Texas, it was green. And Marble Falls is magical.” They discovered their property on a map, complete with a huge pond, and asked the realtor if there was water, even in a drought. Yes.

For his whole life, Benini tells me, he has done the right thing at the right time. “My sales were always just enough to keep me going.” Buying only what he could afford has afforded him the freedom to do exactly what he wants. “I never wanted to be in some art clique. I had a built-in audience; my muse followed me.” 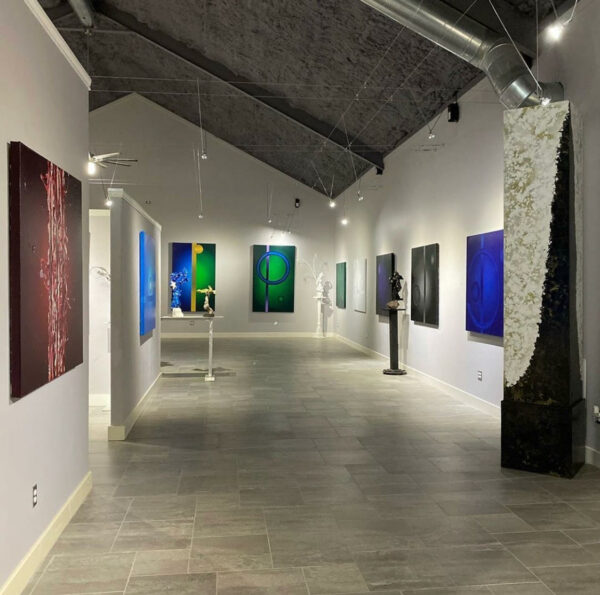 MuseoBenini is open to visitors with a little advance planning, though their hours have been affected due to Covid-19. Call the office ahead of time to set up an appointment. It does not disappoint: the grounds buzz with life and beauty and the galleries transport you to another time and place — if not Italy or Arkansas or Florida, then some incalculable combination of each point along the way.

“My father relocated our family every few years for his profession, and I quickly picked up on different cultures and different languages. From an early age, I kept moving and saw all the trends in different cities, different countries. I never belonged anywhere; being an outsider has always come very easy to me.”

Sending love and affection to you both from your friends in Hot Springs National Park, Arkansas. Your presence in this city is evident in the living arts community and the Wednesday Night Poetry readings which are online now that CoVid-19 has interrupted public gatherings.❤️❤️❤️❤️❤️❤️❤️

Benini and Lorraine I really enjoyed this article about your paintings and your life in Texas. I miss you very much and really miss being able to just pop in for a visit when you lived in Hot Springs. Those were special occasions in my life back then. Maybe one day I will be there for a visit. Hugs and Kisses, Patty

Peace and love to you, at all times, my dearest friends.

This is a beautiful website – and I think the most complete and interesting bio of Benini I have read. The incredible Beninis leave their lasting mark wherever and with whomever they share their great talents. The Beninis are indeed Angels of the Arts.

Congratulations Benini & Lorraine. As we sit here in Canada watching the news about hurricane Laura, we pray that your safety is not at risk. We cannot stand all of the BS politics of the US system & are greatful to be Canadians. When we were living in Napoule France in1977 at Port La Galere there was a sign at the marina club asking Guests to please not discuss religion, politics, money, or nationalities of the members. Funny how now some 46 years later that the world is in the “Mess” it is. We pray you will just keep on being CREATIVE, & leave this earth with your legacy for a needy world. We wonder what DaVinci, Van Gogh & others thought while creating their memorials to ART. LOL J & J We shall never quit!! Too much to Live For !

I can say, as your kid brother , that I have followed you all life. You and Lorraine have gone a long way and I congratulate you for it all. You started decorating Easter eggs when you were five years young and travelled your way to the great point you are in now, Great combination of an Artist a great supporting and complementing Lorraine, You both deserve the goal that you have reached and wish you further success. Love .