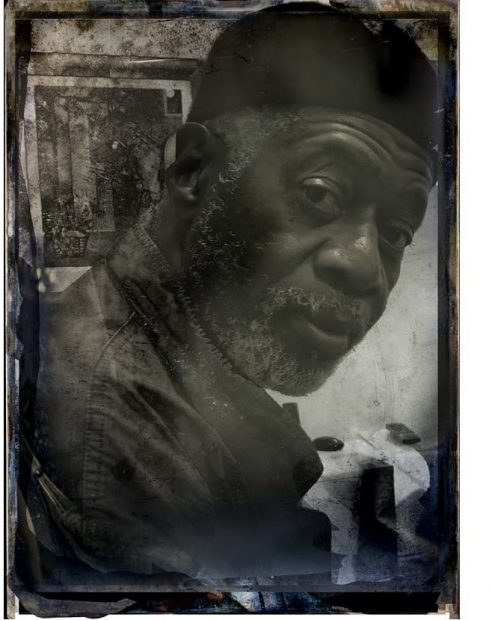 On April 7, 2020, my friend, the art dealer and lover of art Eugene Foney, passed away. I wanted to share some brief thoughts about this remarkable man.

My first encounter with Eugene came in late 1991. He arrived at my mothers’ home to see a painting that I had given to her as a gift. The painting was a very large Willem de Kooning-influenced abstraction. Eugene looked at the painting for a long time, then asked, “Can I buy it?”

I said, “Brother, it’s my mother’s painting!” We both laughed, and moved on to talk other business. The next day Eugene called and inquired about the painting, this time with a dollar figure. I said, “Dude, no,” but he would not be denied.

After going back and forth, I began to rethink the deal. I thought: Mom could use the cash; I could always make another painting. I met Eugene at my mothers’ home while she was at work — he took the painting, and I took the cash!

It’s now safe to say that cash did not win the day. Because later that day, when my mother came home, I handed her the cash, but with a confused look on her face she said, “What is this? And where is my painting?” Years later, I had a show of my drawings here in Houston. At the opening, Eugene spotted my mother across the crowded room and approached her, but before he could speak, she said to him, “The man who stole my painting!” They both laughed.

The place was packed with art: prints, paintings, drawings, posters, photos, and books everywhere. I remember feeling that this was Eugene’s biography. A salesman’s travels — his passions, and perhaps his hardships.

Something else I recall about Eugene is that when you saw him at a public event he was always returning from someplace: Japan, Europe, NYC, or Chicago. I remember thinking, How does this cat pull this off? It was one of the things I admired most about him — he was a hustler, a throwback to something distant, something about him was the stuff of novels and plays.

Eugene convinced me to make my first set of serious prints. The set was called Ready Made Africans. We drove his car to San Antonio to meet the printers and we had a long talk about art. We spoke of artworld bullshit, cheap collectors, the state of black art in America, money, and why we chose to do this for a living.

For Eugene, art was a powerful device for communication. He felt the voice of African American artists had to be heard, and he wanted to be a part of providing that platform, and he was. Eugene’s relationship to the late-great artist John Biggers is well known. He was a longtime champion of the painter’s work and helped introduce Biggers to a new generation of artists. Of course, John had many champions in the wonderful people at Texas Southern University, and many others. But what caught my fancy was Eugene, the traveling salesman, with Biggers’ prints in his car.

Eugene’s independent spirit and trickster double consciousness was a powerful device — one I felt he used throughout his life. I really believe that he used these forces to help many African American artist thrive. He attended every opening and every talk, like the best boxers moving in and out of range but always going the distance. There will be another time to give a more intellectual analysis of Eugene’s career, but for now, in memory of my friend, I am reminded of the essay by James Baldwin called Sweet Lorraine, about the late Lorrine Hansberry. The essay ends with Baldwin’s telling of his last encounter with the her. He tells her how beautiful she looks as they’re departing, and she responds by saying, “It helps to develop a serious illness, Jimmy,” and then waves and disappears.

The last time I saw Eugene was at an opening at the Menil Collection in Houston. It was very crowded, and I saw him standing in the corner, looking very much like a tall African sculpture. We didn’t speak but stared at each other with that brother man stare that can say everything that needs to be said. I finally met him as we were both leaving, and as we walked out we talked a little about Chicago, and what I was working on, and set a time for a studio visit. As he headed to his car, he turned and said, “I will see you when I get back,” and then waved and disappeared.

Spot on baby, spot on! He was our very own Melquiades. I miss my friend.

This read was such a welcomed marker in time. Reading this was like walking through the park on beautiful day with a good friend talking about these Eugene Foney stories as though he is still with us. I thank you David for taking the time to write this lovely piece of memory. Eugene was an admirable man that truly believed in the history and making of of art and African American artists making work.

Thanks for this beautiful tribute.

Beautiful tribute. It moves me to record my own remembrance. I met Eugene at Mary Ross Taylor’s bookstore on Bissonnet where Ntozake Shange was having a book signing around 1978. We talked art and he was surprised that I knew about Romare Bearden. I think Eugene had just blown into town. Thus began a thirty plus year friendship over many cities and art events. Last time I saw him was December 2019 in Miami at Art Basel where he was working a booth at Prizm Art Fair. Before that it was a breakfast hang in Chicago at Mather’s where we ate with a friend before we drove to a Richard Hunt retrospective in a western suburb. That same trip he hipped me to Theaster Gates’ Black Artist Retreat party that I crashed at the Stony Island Arts Bank. (Theaster said, “You can’t crash a Chicago party!” like a true black Chicagoan. It seemed like Eugene would be here forever. Hustler and educator. He was a mystery in plain view. Loved him and will certainly miss him.

I’ll miss him. A happy moment I recall was a visit to his gallery and library. He was filled with knowledge and enjoyed sharing it as much as I enjoyed learning from him.

I was along for many of those road trips across the US. Gene was had the same up beat mood Will be missed

…missing his quirky encouragement and consistent supportive shrugs…
Keep expecting him to drop by, check in, share some literature and other news from a recent excursion.

I am David’s Mother. I am remembering all the times Eugene made me smile. It will be heart wrenching not seeing his face at another art opening.

Such a sweet and touching memory, David. Thank you for sharing this beautiful tribute to your friend. So much love…

David,
Thank you for the kindness & respect you have shown Eugene. He was a dear friend & client for 4 decades & will be very missed by very many. Words escape me.

This was wonderful to read David. Brought Gene to life once more, and I loved that!

Lovely remembrance. Eugene was special, and I am happy to have known him.

Wonderful read about an exceptional brother. We talked often about my artist uncle, Reginald Gammon, and Eugene advised me often on getting the work from my uncle’s estate greater exposure. We talked in early March while he was in Chicago about the upcoming Soul of a Nation exhibit coming to MFAH and the Spiral portion of that exhibit. Plus, he was always angling for an invite for my wife’s gumbo. Will miss this unique man.

Eugene aka Mr Foney, was my bonus gift from God, my art dealer, my friend and so much more. I knew Eugene for over 30 years I first laid eyes on him when he was doing a lecture on collecting Art in the community room of Swifton Commons Mall. He said buy what you like just in case you can’t sell it later. He also reference it to acquiring a good bowl of collard greens. Over the years I was blessed to be Eugene’s guest to share meals with folks like John and Hazel Biggers, Samella Lewis, David Driscol, Elizabeth Catlett, Frank Frazier, Paul Jones the collector , Kerry James Marshall, Ed Clark, Najee Dorsey. Jacob and Ruth Lawrence, Cedric Cox and Earlie Hudnall to name a few. He even got me to throw a dinner party for Benny Andrews when he was in town at the local university then he surprised me by coming to town and joining the dinner. Those encounters were priceless and always filled with something special Eugene had said to make everyone laugh. Yes I was blessed to have experience collecting art the Artcetra way where there was always a story behind every piece of art I own and many friendships and memories to last a life time. My last visit with Eugene was Feb 28,2020… he came to town to take me to a Romare Bearden exhibit at the Art Museum and I later that day served him a bowl of my homemade soup. I wish I could have said a bowl of collard greens but my Soup was just as good. I miss him but feel his presence in every room of my house because all my art has a Eugene story.
Thank you God for gifting me such a special friendship to share my life’s journey.

A mutual friend of ours called today and my rush of Eugene memories flowed my mind. Following his death, his influence on my collection could be seen in every home. We met in DC at the Congressional Black Caucus weekend. He was carrying a master piece of art in his tote bag! We would go on to do deal after deal. He volunteered to deliver a piece to our Martha’s Vineyard Cottage as long as champagne was chilled. There was the time I flew into Houston acquired an oversized piece, then carried it off to Dallas. Books, posters, prints, shows…Eugene knew of art happenings around the world. We last connected in Charleston USA at a Thelma Golden lecture about the Harlem Studio Museum. I love how he painted art visions with a big, broad brush. We miss you Man!