An Interview with Larry Graeber 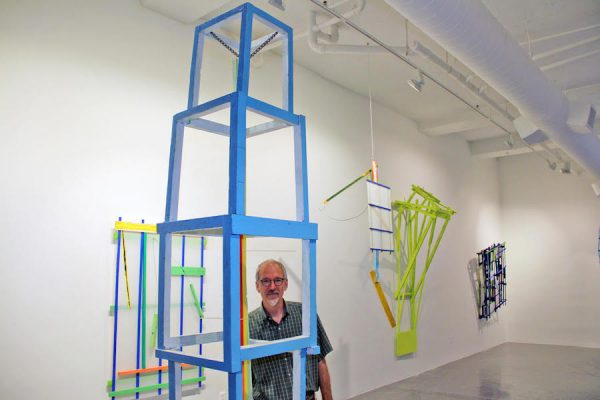 Larry Graeber is one of San Antonio’s senior, under-the-radar artists. He has created decades of bold and original sculptures and paintings with an instantly recognizable style, but (my opinion) his quiet, unassuming demeanor has kept him from getting the local recognition he deserves. Larry is the only artist to ever turn down my request for an interview, but thankfully, I’m not above pleading and begging. His current exhibit at Blue Star Contemporary, Formal Proof, is a collaboration with Austin artist Sterling Allen (who will get his own interview). The work is up until the end of the month. It’s must-see brilliant.

Gary Sweeney: What was your first experience with art?

Larry Graeber: Zorro — I made a life-size drawing of him to hang on my bedroom door.

GS: Did you have a favorite artist growing up?

LG: It was more like periods of art. My first movement of preoccupation was the Impressionists and Post-Impressionists. Then, I got obsessed with the Renaissance. I saw the time and it artists as heroic, the grassroots of western civilization. At that time, painting and sculpture were the elite forms of expression, conveying the most influential ideas of the day. Then, the 20th century American arts awakening, with its identity as individualistic and pragmatic.

GS: What kind of student were you in high school?

LG: Poor, but loved high school anyway. Hung with my click, white Levi’s and white Levi jackets, graduated from a motorcycle to a car, and worked after school.

GS: How would you describe your artwork to someone who has never seen it?

LG: As poetic approximations. That I usually use oil on canvas and make sculpture out of inconsequential 3-D elements made or found.

GS: What did your early work look like? Was there an artist you borrowed from, or were inﬂuenced by?

LG: Because my initial college studies were architecture, it wasn’t until I delved into the ﬁne arts building, where I was introduced to printmaking, that I discovered that I had a knack for the plastic arts and their visual cognitive stimuli. It still wasn’t until later, when I began looking hard at art history, that I began to identify with and admire two particular movements. The Post-Impressionists, Cezanne and Van Gogh and the Italian Renaissance, where I gained an overwhelming respect for Michelangelo. It was by way of Michelangelo that I learned to draw, copying his work incessantly, like learning to play the piano. As for color, Van Gogh was my aspiration; his late sun-drenched landscapes have always amazed me.

My career as an artist didn’t actually begin until I moved to San Antonio in the early ’70s where, from the comfort of a boarding house on Woodlawn Avenue, I was able to spend a year studying sculpture with Phil Evett at Trinity University while I worked throwing the newspaper and waiting on tables. Following that year I moved into a duplex on University Avenue at Cincinnati and Fredericksburg Road to complete a series of oil pastels on paper and one oil painting that, along with bisque clay models I had made at Trinity, were exhibited at the McNay Museum in a show titled Works From a Small Duplex, 1974.

Not in the same way, and through many iterations, my practice still revolves around these three disciplines: painting, sculpture, and works on paper. They are my language.

GS: I like how your work seems to stay away from fads and gimmicks. Do you even pay attention to contemporary art movements?

LG: I do. I love the contemporary art world; I follow it and architecture like some people follow cars or music. It’s what excites me. Because my work does not maybe look like the pervasive agendas doesn’t mean I’m not inﬂuenced or in dialogue with it. Part of my practice is about appropriation, and a big part of that appropriation comes from my gaze at our art world. High and low, superﬁcial or compelling, it’s out there, our tapestry. It’s nice to feel a part of it. The fun is deciphering and identifying one’s own tastes.

GS: If you could lock into a speciﬁc time in your life, when would it be?

LG: Right now. I may not be up to speed on all the minutia of our current world, but I do feel in touch with myself unlike never before. Eager to be involved, to wonder and to make. There is plenty of downside, regrets, wrong turns and ignorant conduct that shadow my past, but maybe they have helped to formulate some bit of wisdom. I trust it enriches my work and experiences. Obviously, I’ve got my share of pipe dreams, but even they help hone the present and reassure me there is much to be done and experienced. 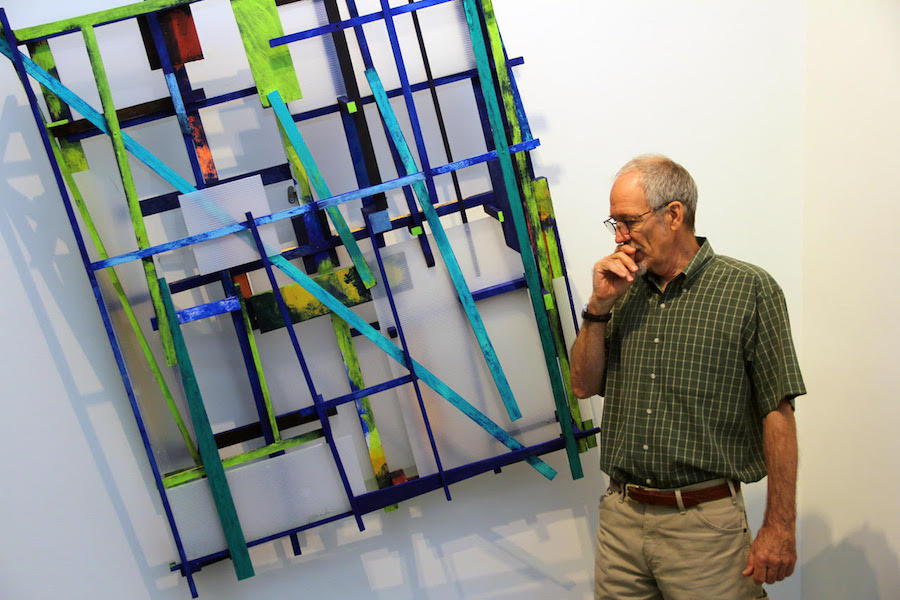 GS: Where does the work currently on display at Blue Star ﬁt into your oeuvre? Is this the start of a new series, or a continuation of past work?

LG: I really don’t see my work as a variety of series — rather a kind of ongoing continuum. What does happen is that I circle through my disciplines (painting, sculpture, works on paper) as a way to try to maintain a freshness in my expression, and maybe discover something that will inﬂuence one or the other of my expressions. But when this opportunity to show sculpture at [Blue Star} came up, and Sterling and I had dismissed the idea of doing a collaborative piece and instead decided to do a dialogue show, I knew immediately I wanted to see if I could scale up what I refer to as my debris sculpture. What Sterling and I did do though was to establish some loose parameters for our dialogue.

GS: Does your color choice have a deliberate backstory, or is it more intuitive?

LG: When I ﬁrst began painting, it was important to me to learn how to mix the color of ﬂesh — it seemed to be the quintessential color, and if it could be mixed, the rest should be a breeze. I don’t have a very large assortment of colors because I like to mix; it’s fun to see how a color will evolve over several mixes. Not to say I don’t have a cerulean and cobalt blue, phthaio and olive green, but most are simply the primary colors. Over the years I believe my color has intensiﬁed, gotten richer and brighter. At least I hope so.

GS: If you had to make a choice between painting and sculpture, what would you choose?

LG: If I had to make a choice: hard to say, I so much enjoy all three practices. Really it’s about the studio life, and having stations where I can do one or the other. Going out to look over previous progress, maybe make some adjustment or sit down to do some resource drawing and see what develops, is very rewarding. I can’t make sculpture in West Texas, so I paint there. Here, the studio furnishes the opportunity to do all three.

GS: Your work always seems to make abstraction look fresh. How do you keep from getting into a rut?

LG: Think it may be my attention span. I can’t seem to carry a group of paintings very far without deviating from the initial objective.

GS: If you could own any piece of artwork, what would it be?

LG: Not an easy question to answer, so many favorites, but maybe the last painting van Gogh made. The grackles over the blunted road: so emotional, so raw.

GS: What kind of experience have you encountered with the gallery system? If you could change it in some way, how would you do it?

LG: [I’ve been involved with] multiple galleries, none of them terribly satisfying. Craighead Green [in] Dallas, and Gremillion in Houston did well for me, 8 and 12 years. Joan Grona here, but as you know, San Antonio is not a survivable market.

I don’t know, it’s obviously a difficult profession, with a variety of business models, and then the impact of the internet probably makes some of the gallery owners pull their hair. I get the stable mentality but it is strongly possessive and restrictive. With a person like myself, who makes singular objects, a work can often gather dust when it is closeted in such an environment. The internet is helping with the development of gallery co-op sites like Artsy, but sharing sales is not an easy hurdle to surmount. As far as I’m concerned, a work of mine should be a negotiable commodity whether by a gallery or a third party, where everyone is in the loop.

GS: If you didn’t do artwork, what do you think you would be doing?

LG: Architecture, my first ambition. If I’d been a better student, I would likely have been an architect.

GS: What does a typical day look like for you?

LG: Up early, a walk, breakfast, newspaper — online industry poop, computer chores, emails etc. Usually not until 11am do I get to go out to the studio, where I listen to the radio, maybe do some sketching, evaluate stuff, and establish a direction for the rest of the day, whether it be to paint or work in the shop, which could entail making stretchers or working on sculpture. Work usually doesn’t start until early afternoon after having had lunch, and maybe a nap. I may or may not put music on and usually work until six, depending upon the time of year and project that might be underway.

GS: Do you struggle with your ideas, or does your artwork flow out of you effortlessly?

LG: For me nothing comes effortlessly, but over the years I have compiled resource material that I can lean on when I get in a jam.

GS: What’s the best advice you could give a young painter?

LG: Look at a lot of painters, study the history of painting. Reconcile with its limitations and parameters, then amp it up through ingenuity and imagination.

Larry Graeber and Sterling Allen’s ‘Formal Proof’ is on view at Blue Star Contemporary in San Antonio through Jan. 5, 2020.

The most prolific artist I have ever known and totally dedicated to the making of art.