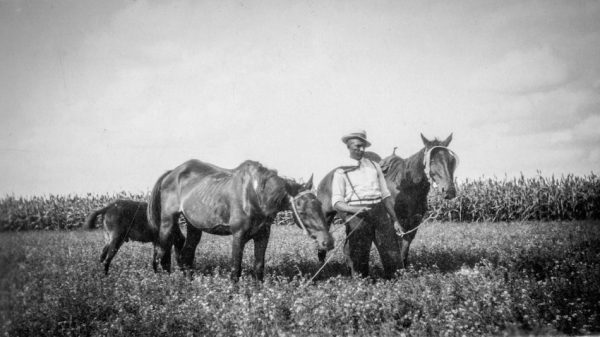 “Art alone makes life possible,” opined the late German conceptual handyman Joseph Beuys. “…Even the act of peeling a potato can be a work of art… .”

I thought about Beuys’ admonition the other night as I enjoyed a piece of sweet potato pie at the Austin History Center’s combination “pie social” and opening event for the exhibition Clearing Stones, Sowing Seeds – Photographs from the Travis County Negro Extension Service.

The 16 images in the exhibition, selected from the Center’s collection of some 600 Negro Extension Service photographs, offer a compelling view of life for the black residents of Central Texas from the early 1940s to the early 1960s. As is the case with so many cultural artifacts, however, this collection of images was almost lost. In 2004, the Center’s then-liaison for African-American outreach, Karen Riles, was visiting a cousin in Lockhart. When the cousin learned of Riles’ new position as a gatherer and rescuer of the area’s black history, she mentioned a box of old photographs that another family member had rescued from a dumpster. “It was a wonderful find,” says Riles. “A thick stack of 8 x 10s that otherwise would have disappeared in the dump.”

The opening’s caterer, Jennifer Cumberbatch, prefaced her address to the gathering with a reading from Anna Deavere Smith’s play Twilight: Los Angeles, about the searing riots in that city after the Rodney King verdict of 1992. The excerpt, written in the voice of California chef Alice Waters, lamented our culture’s loss of the “civilizing place” of the family table. “Food used to be a way for people to come together,” Cumberbatch paraphrased at the reading’s conclusion. “But we’ve lost so much of that essential courtesy and kindness.” 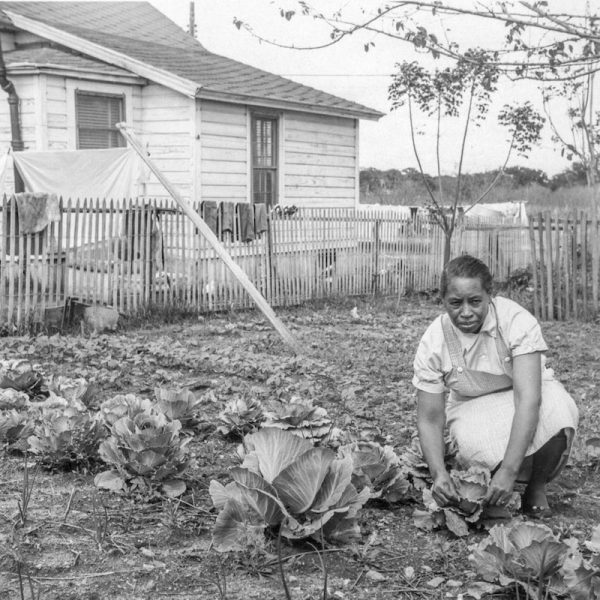 Gesturing at the framed images surrounding us, she cut to the heart of the show. “It’s an incredible joy to work with my hands in the same place that these people did. These photographs remind us that people came before us and that people will come after us. We didn’t just take a picture of them. They lived here.”

All of the exhibited images are formally untitled but described with short, bracketed descriptions. Some are undated, and some provide the exact date. [Men in a Cotton Field] from July 1957 presents four gentlemen in the foreground, standing in waist- and chest-high cotton stalks. They all wear hats, and three wear ties. Their faces carry the burdens of the past, as well as the dreams, expectations, and uncertainties of the future.

Two men with large competitor numbers hung around their necks hold the reins for blue-ribbon livestock in [Men with Award-Winning Beef Calves]. One, wearing a sweater vest, has a bemused expression, while the other, attired in work clothes, seems to find some doubt in the photographic process. A crowd behind them of a dozen and a half men and boys, variously clad in overalls and fedoras, smile and laugh, though some reveal a guarded expression. At least one man is clearly identifiable as an Anglo, his unreadable face topped by what appears to be an Open Road Stetson with the side brims curled up. Like a few others shown, this 1940 image is identified as the work of the Ross Studio. This and other photographs in the exhibition may depict the annual Food and Livestock Show held at Austin’s Rosewood Park and the Doris Miller Auditorium.

A 1964 Ross Studio photograph is described as [Group of Young Women with Baked Goods]. As their teachers look on from the rear of a long table, high school girls stand beside their cookies and other baked items, looking into the camera as though traveling through a looking glass into the wider world outside their own. Some appear to wonder about their future lives as they perhaps also wonder about the people who might be viewing these images in the future. Some are hopeful, some a little scared, and some, naturally, are quizzical. 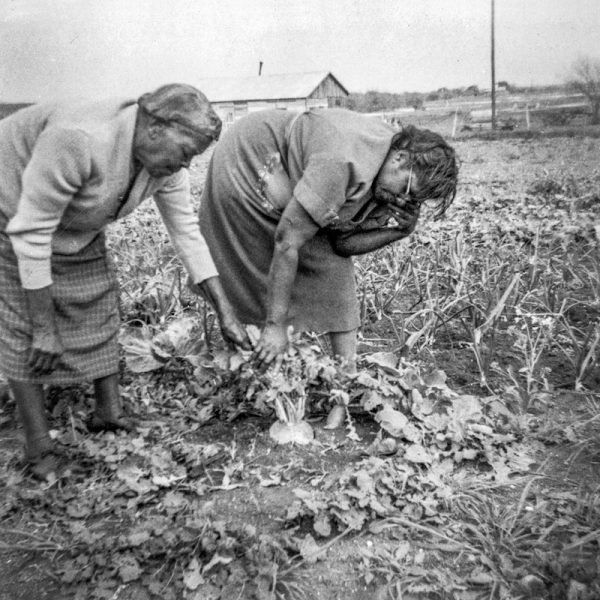 All of the images seem to ask of us: How do we connect with the people in the photographs? How do we know about their world? In [Woman Gardening], dated April 15, 1958, a lone, stooped figure seems to harbor all the troubles of this world in her face. Though they don’t look into the camera lens, the two ladies of [Women Gardening], an image taken in May 1957, appear similarly burdened. An enlarged, untitled image that I’ll call [Man with Horses] (pictured at top) depicts a lone figure in a field of almost knee-high growth with three horses. Standing not far from what might be a corn crop, dressed in hat, tie, and suspenders, the somewhat jaunty, angled stance of the man seems to indicate that the field, with its vast, open sky, is a place where he comes to commune with an essential sense freedom that he might not experience as fully elsewhere. Perhaps here, in an open field endowed with the simple majesty of growing crops, he feels a connection to something larger than this world. 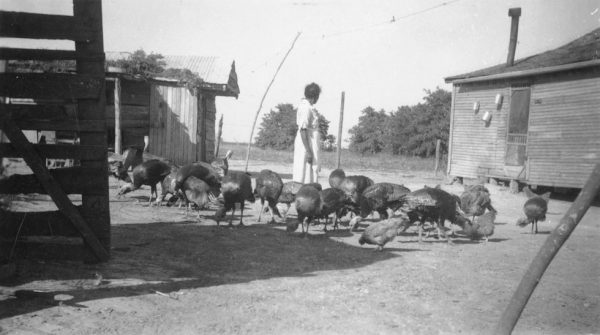 For whatever reason, the lone woman in the undated image [Woman with Turkeys] turns her gaze away from the camera, perhaps feeling wistful about the horizon beyond her family’s farm. In contrast, the undated [Woman in White Dress] presents a figure more engaged, dressed as though she may have just come from school or a party, holding freshly-picked produce as if offering it to the viewer. 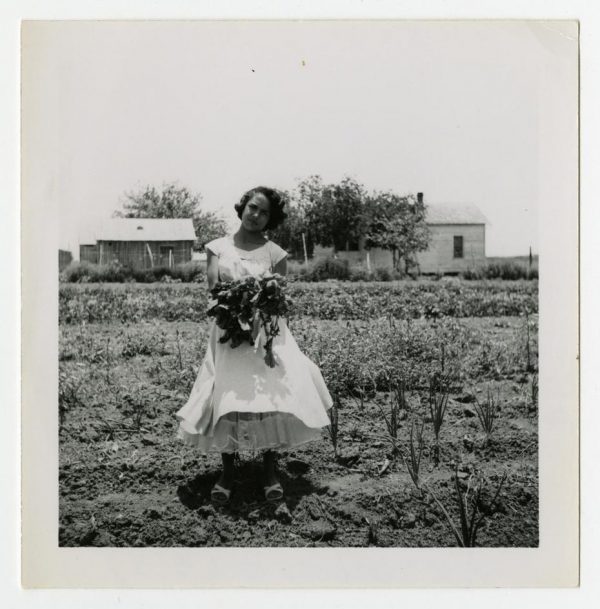 The Smith-Lever Act of 1914 established the Cooperative Extension Service as an educational outreach in improved farming practices and home economics of the U.S. Department of Agriculture. The program began in Texas the following year, with outreach to black citizens administered through the historically black institution Prairie View A&M University. As Debra A. Reid writes in her 2007 study, Reaping a Greater Harvest – African-Americans, the Extension Service, and Rural Reform in Jim Crow Texas, Texas’ black outreach “…quickly became the largest in the nation, securing more funding, more staff, and more participants than any other. It developed as a model of progressive reform, with college-educated African-Americans instructing black youth and adults about farm and home management and efficiency and serving as agents of modernization.”

Popular cookbook and children’s author Angela Shelf Medearis, a.k.a. the Kitchen Diva, testified to the continuing benefits of that outreach in an Austin American-Statesman article last summer. Opal H. Washington, Medearis wrote, worked as the Travis County Negro Extension Service agent from 1952 until the agency was desegrated after the passage of Civil Rights legislation in 1965, and then continued serving all of the county’s population and writing a Statesman column “about canning, baking, steaming and other kitchen minutiae” until her retirement in 1982. “The user-friendly articles that Washington wrote each week were like getting advice from my mom,” Medearis noted, “and I wasn’t the only one who felt that way.”

Digitized copies of 257 images from the collection can be seen here.