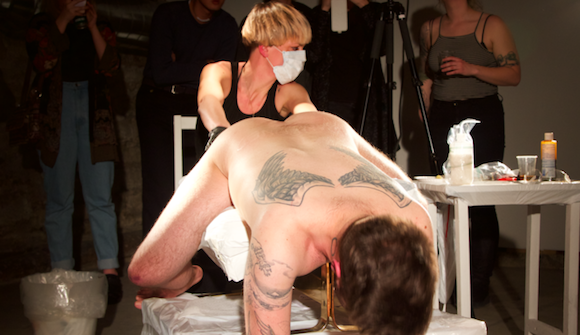 Queer performance artist Abel Azcona participated in Houston’s Experimental Action Festival a few weeks ago and at the 2014 Lone Star Performance Explosion festival, which Glasstire’s Bill Davenport wrote about in “Lone Star Performance Explosion: Some of Night 2.” Davenport declared that Azcona’s piece was “far and away the most powerful piece I saw,” but concluded, “This is too dangerous.”

In a recent performance in Chicago, Azcona had the words “Make America Great Again” tattooed in a circle around his anus. The Huffington Post covered the event, calling the artist “heroic” and adding, “What a painfully powerful statement!”