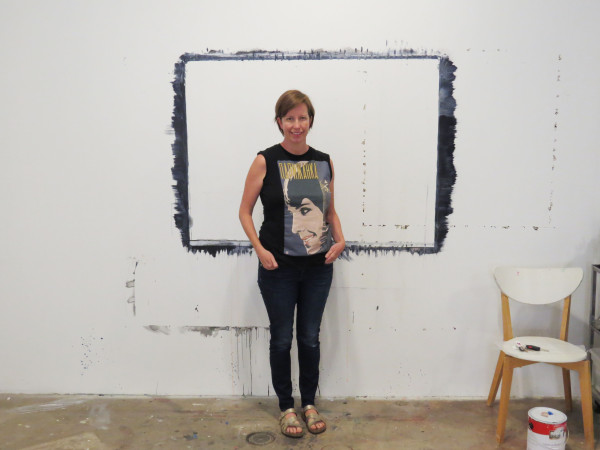 A San Antonio-based artist who has been exhibiting since the early 2000s, Joey Fauerso is known for videos, animations, and works on paper that blur the boundaries between painting, drawing, and performance. She is keen on collaboration and often enlists models and other participants in developing her projects; in creating a work, Fauerso assumes a role analogous to that of a movie director. She identifies primarily as a painter, however, whose procedures—whether undertaken digitally or by her own hand—involve an intuitive process of layering imagery by alternately adding and subtracting compositional elements. 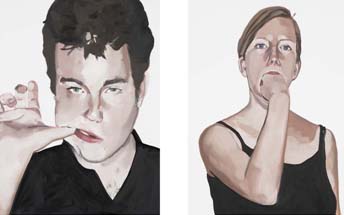 Fauerso studied painting at the University of Iowa, Iowa City, where she earned her BFA in 1998, and the University of Wisconsin, Madison, where she received her MA and MFA degrees in 2000 and 2001. Among her early influences were the figurative painters Milton Avery, Joan Brown, and Alice Neel, whose impact on Fauerso is evident in a series of portraits and self-portraits that were included in an emerging-artist exhibition at the Dallas Museum of Art in 2003. Responding to the quirkiness of Neel’s portraits while also drawing upon her own background in theater, Fauerso invited friends to pose for photographs that she took of them sucking their fingers or hands, and she included herself as one of the camera’s subjects.   After taking hundreds of photographs, she sorted through them to find the most provocative images in which a single gesture could evoke a moment of high drama, one that might seem startling or confrontational to the viewer, or which might trigger some possible storyline. She then made paintings based on the photographs, in a style reminiscent of Neel’s.

Moving back and forth between technology and her own hand has become a favored modus operandi for Fauerso, who taught herself video animation and began animating her works on paper in 2005. During a productive artist residency in Roswell, New Mexico, Fauerso made several paintings on paper of the area’s crystalline starlit skies. At the same time, she continued her exploration of performative portraiture and took photos of friends engaged in the act of screaming. What developed from these explorations was the installation Wide Open Wide. Presented at Women and Their Work in Austin, the project consists of a short animation exhibited along with the hundreds of paintings used in its creation.

A story about consciousness, our connection to nature, and bodily transcendence, the animation begins with a view of changing patterns of nighttime sky framed within the shape of an open mouth and set to music, and then transitions into white light and the sounds of the artist’s father (who is a musician) playing the hambone with his body. The hambone audio continues as swiftly moving flocks of birds, painted by Fauerso, enter with the added tune of bird sounds. The white light with audio next reemerges as an interlude that leads to a portrait of a young man who opens his mouth to reveal the starlit skies, and then closes his mouth, gets up from his chair, and departs the scene. This final sequence was inspired by a story from the Bhagavad Gita in which Krishna’s foster mother believes that the child had stolen butter and pries open his mouth, only to see the universe and realize that her adopted son is a god. Fauerso’s longtime interest in metaphysical consciousness and Eastern religions stems from having been raised in a Transcendental Meditation community that her parents helped set up in Fairfield, Iowa, where she learned to meditate at the age of four. 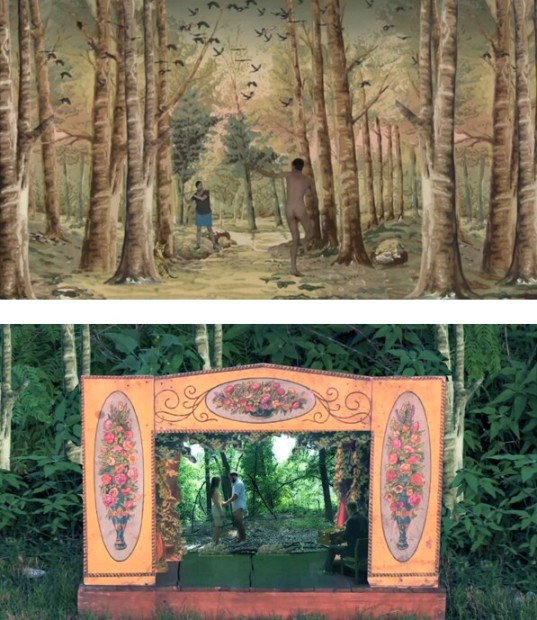 Many of Fauerso’s videos incorporate found staging devices, including antique objects from thrift stores and garage sales. Vintage wallpaper featuring scenic landscape imagery provided the setting for Fauerso’s video The Clearing (2010), while an antique toy stage with floral designs was used in Drama (2012). To create the set for The Clearing, the artist scanned sections of the wallpaper and digitally collaged them into fifteen layers of video footage that she shot against a green screen. At the beginning of Drama, we see Fauerso herself setting up the antique stage in a landscape dense with trees. Once she exits the scene, the stage is transformed into a performing space where a musician (again her father) plays the harmonium while watching another scene that is framed by the stage’s proscenium arch.  Through digital layering, Fauerso is able to weave together imagery referring to different moments in time and levels of reality into a seamless moving composition.

In terms of content, The Clearing and Drama reveal Fauerso’s interest in the male nude which, for her, is a symbol for gender equality. Considering that Western culture has long held a double standard when it comes to depicting male and female nudity, Fauerso often puts the male nude in the limelight as a means of evening the score. In The Clearing, a fully clothed Fauerso appears as a flutist who simulates playing music from a James Bond film as an accompaniment to a nude male who dances about in manner of a traditionally female wood nymph (or a Bond opening-title sequence). Continuing a process begun with her performative photographs, Fauerso encouraged her model to improvise as he went along, to walk the line between something that seems choreographed and out of control. In Drama, the male and female models seen through the antique stage are given equal status. The video begins with the woman naked and the man clothed. She then undresses him and puts on his clothes. Then the transaction is reversed as he undresses her and resumes wearing the clothes.

While working on her next project, Fauerso liked the streaks and blemishes appearing on her printed images when the printer was running low on ink. Interested in their metaphoric potential, she began intentionally incorporating these happy accidents into her compositions.  In Stage Theories—a series of drawings, collages, and videos—reductive printing and staining are used to examine relationships between digital language, painting, and performance. In both the animated and paper versions, the model interacts with a variety of abstract elements, including the warping of the paper, that evoke associations with life’s ongoing maladies such as disease and pollution.

Invited in 2014 to create new work for an exhibition at Artpace in San Antonio on the theme of landscape, Fauerso decided to focus on the Texas terrain and set out to create her most ambitious animation to date. To gather raw material for this project, she visited a friend’s ranch in the Gulf Coast wetlands, where she took a boat ride down the Guadalupe River with a video camera mounted to the front of the boat. Back in the studio, Fauerso reviewed the footage and became intrigued by the way the imagery had become abstracted when the camera went through an area of thick brush, giving the effect of one reality opening up into another. Returning to the process used for Wide Open Wide, Fauerso started making paintings of individual frames of footage, and found that about a minute of footage yielded 198 paintings. Continuing her interest in the expressive possibilities of using the printer as performer, she scanned the paintings and printed them while letting the ink gradually run out. Excited by the abstract, painterly, and atmospheric qualities that resulted when printed at the lowest ink levels, she ran the scans through four such cycles. In the final installation of Guadalupe-After Images, Fauerso exhibited 187 of these digital prints of the paintings in a large grid along with a 55-minute animation constructed from the same images. In both the still and moving formats, she offers us an encyclopedic representation of the various types and degrees of connectivity that are possible when we interact with nature, ranging from the pictorial clarity of acute observation to the colorful abstractions that suggest exhilaration or transcendence.

In her latest video project, which is on view at Blue Star Contemporary Art Museum through November 8, Fauerso turns the age-old act of drawing into a form of improvisational theater. In 2014, Fauerso was selected to participate in Open Sessions, a 2-year program of New York City’s The Drawing Center. Designed to provide artists with a platform for stretching and growing in their work, the program enabled Fauerso to compare ideas with other artists such as fellow participant Tatiana Istomina, whose shared interest in collaborative drawing helped to inspire Fauerso’s Drawing Battles, a series of videos in which multiple participants intervene in one another’s drawing process. As in previous projects, Fauerso continues to engage friends and family in her productions.

Recorded in black and white to conform to the most basic palette of traditional drawing, Drawing Battles includes spontaneous performances in which a variety of temperaments emerge. In some of the more humorous scenes, her young sons compete to be on stage, fighting for space while drawing over each other’s drawings and getting messier by the minute. In another example, Fauerso caresses her husband’s hand while he is drawing, eager to see how her touch might affect the quality of his drawn lines. Whereas many of Fauerso’s videos offer insightful perspectives on our connection to nature and the universe, Drawing Battles serves as a unique and inventive mechanism for examining interpersonal relationships, which seems especially timely and necessary in light of our current political climate.