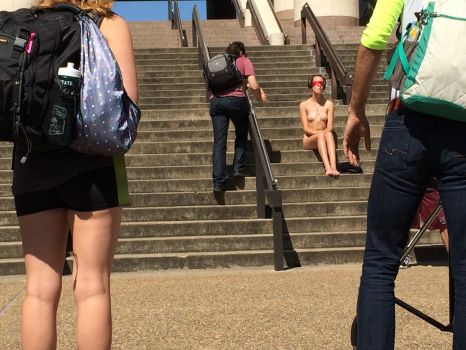 Yesterday, Texas State art student Monika Rostvold sat on the steps of the school’s library, blindfolded and almost completely nude (except for a nude-colored thong and pasties), for 45 minutes, reports the San Antonio Express-News.

Perhaps Rostvold was inspired by the Columbia student who carried a 50-lb mattress around campus this fall in protest of the University’s lack of action against her alleged rapist, a project entitled “Mattress Performance (Carry That Weight)” that doubled as her senior thesis for the visual arts department. In October, women at more than a hundred college campuses were toting mattresses and pillows in solidarity. The story has resurfaced in the past week as the alleged rapist, who was cleared of the claims by the University, is now suing Columbia because it “first became a silent bystander and then turned into an active supporter of a fellow student’s harassment campaign by institutionalizing it and heralding it.”

Rostvold explained her project to the Express-News: “I wanted people to view my body as beauty and power and not a sexual object. The fact that it is Sexual Assault Awareness Month I wanted to create a piece about the standards that exist in our society. Being a victim and having friends who are victims of sexual assault I wanted to take control of my body by eliminating my presence and exposing myself.” 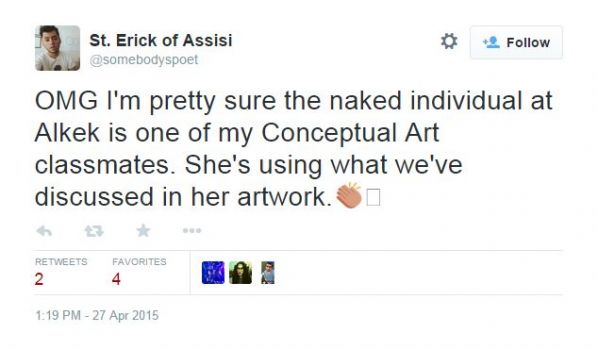 This was the student’s first live performance piece and she said she was “very nervous.” The Texas State Campus Police arrived, but allowed her to carry out the rest of her project.

As one would expect, pictures and tweets went viral. Websites such as brobible.com (yes, “Bro Bible”) had their own comments:

As I’m sure everyone could’ve probably guessed, campus police came to remove her but apparently pulling shit like this is protected by the First Amendment since she wrapped her nips up in tape. That’s not to say that you should rip your clothes off and go struttin’ round campus with your dick wrapped in a sock, of course, but I suppose if you did no one could really stop you.

Another site, totalfratmove.com, chimed in as well: “I get that she has a statement to make—and our awesome country gives her the right to make it publicly. On one hand, she’s definitely getting some attention. People hear ‘titties out in the quad,’ and everyone comes running.”