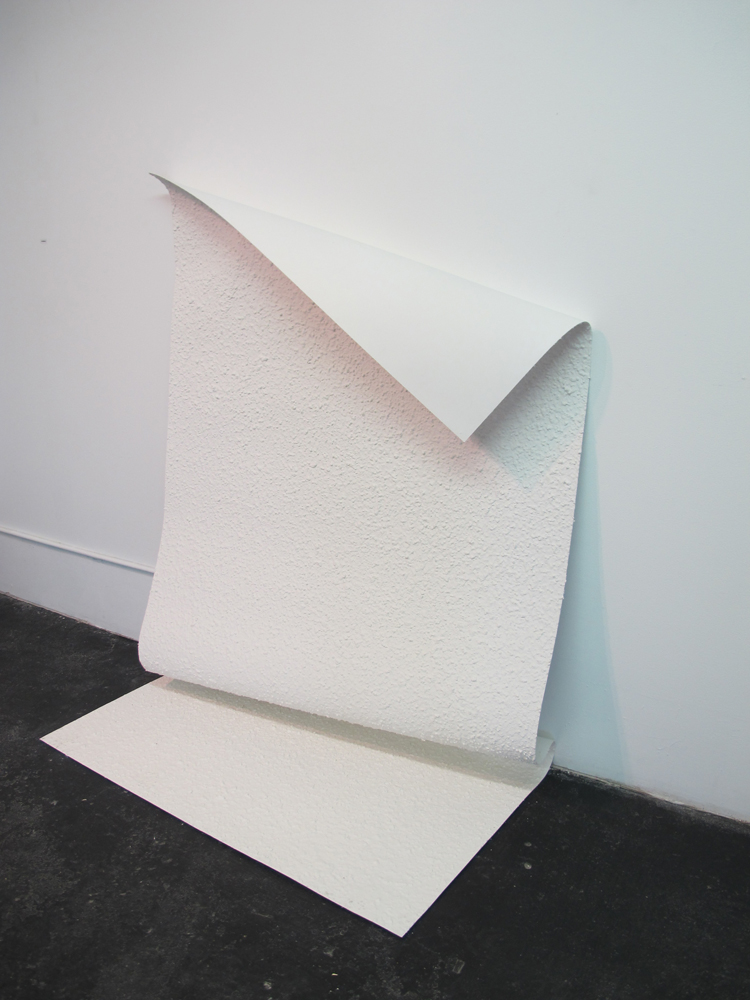 I’ve never met Stephen Kwok, but I was drawn into the work on his site enough to go visit his solo show, “Walled Garden” at Fresh Arts (formerly Spacetaker) until June 22. 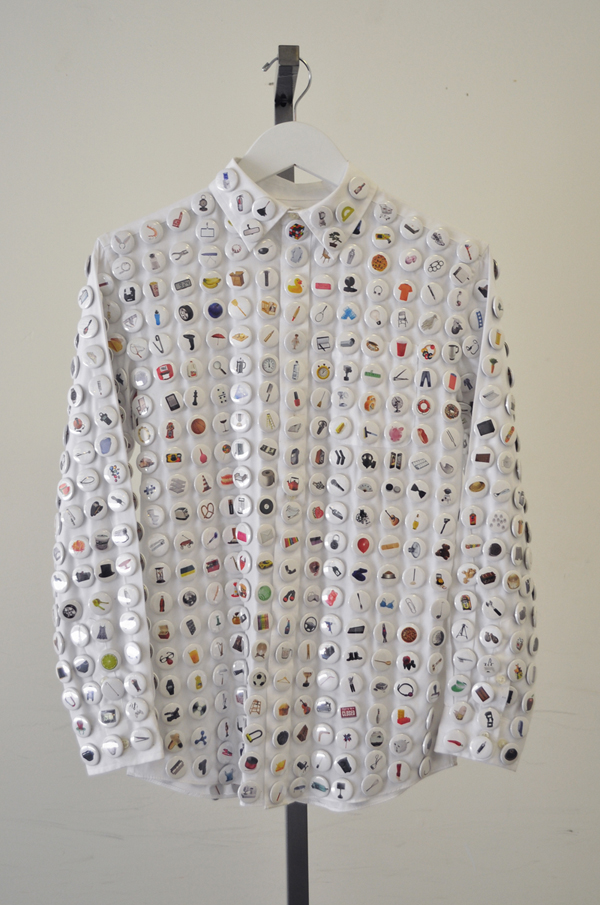 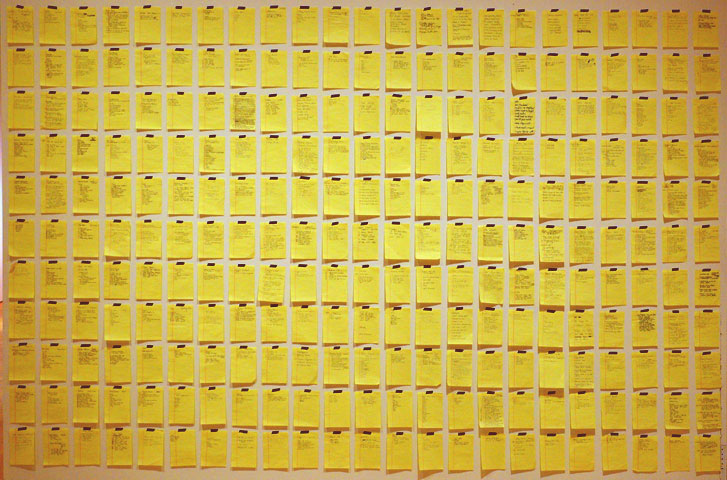 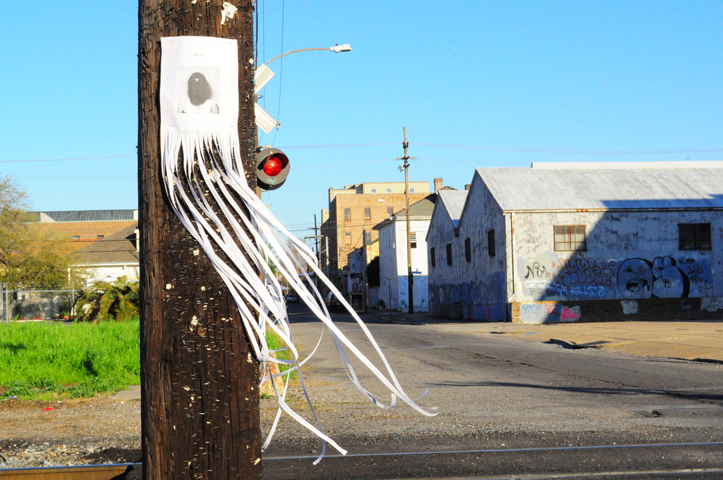 While “Walled Garden” is not the best remix of his work, it is one of the more cerebral and contemporary shows I’ve seen at Fresh Art’s ARC in a while. The show features unassuming and quite charming collection not of grandiose, idealistic flights of world changing imagination, but of “slight manipulations of generic setting(s) and experiments in small/boring magic.” 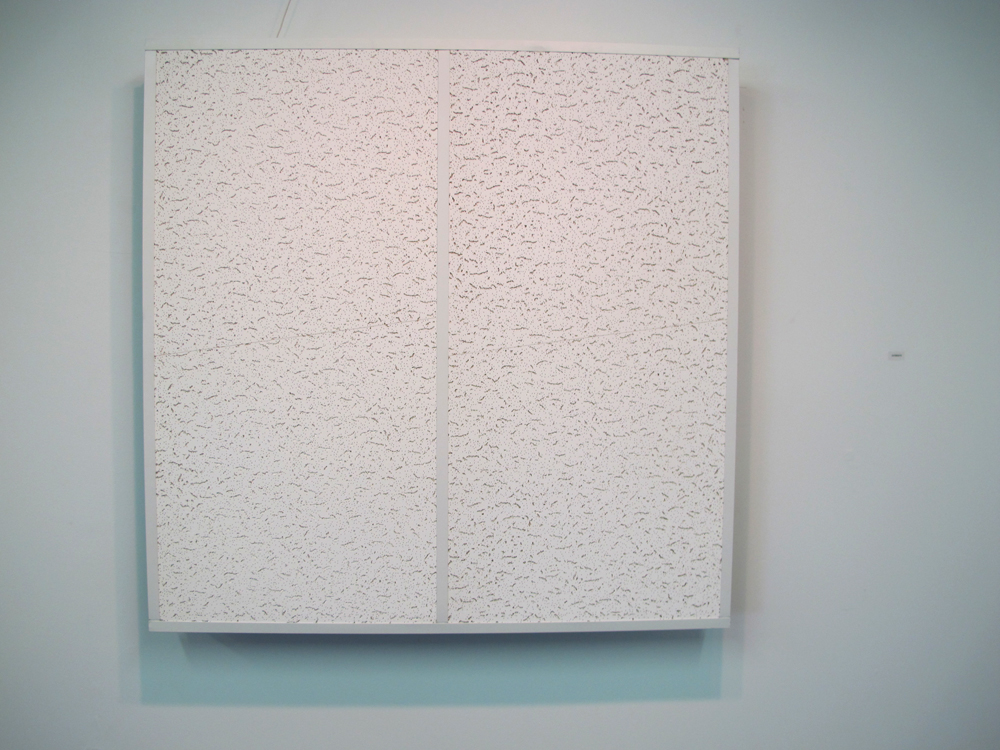 Let me describe it like this. Sink into those skull numbing moments of boredom in any waiting room, cubicle, drivers ed classroom, or DPS line. As your eyes glaze over, look around the room, skimming your focus along the drop ceiling tiles, the popcorn-textured sheetrock, the faux granite tile, and the beige carpeting. In the hypnotic blur of the mundane, Kwok shows us surreal daydreams of a mind so numb it believes it can move things. 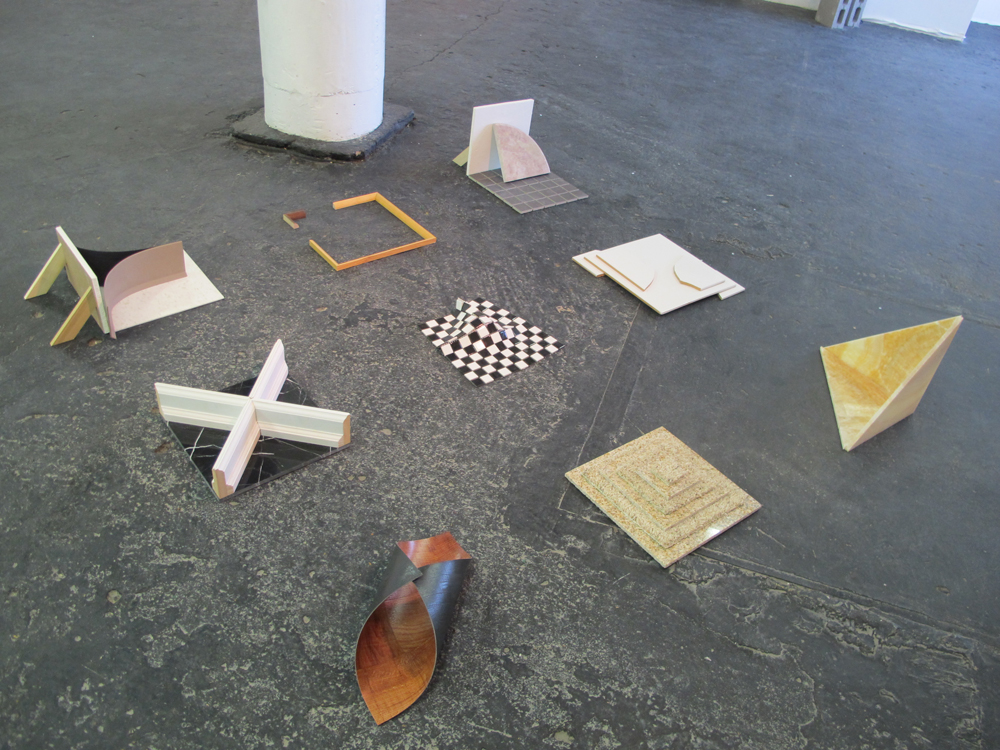 Eating at random lunch spot off Hillcroft just after the show, I described most of Kwok’s works by pointing to the materials of the tables, floor, and ceiling around us, with the same fluorescent lights buzzing overhead as Kwok insisted were left on for his opening reception. He got his materials from “The Superdome of Tile” in New Orleans, where he is based. Houston with its never ceasing new construction is less scrappy-sunken-into than New Orleans, and Kwok purposely reflects this in his stark home town show. 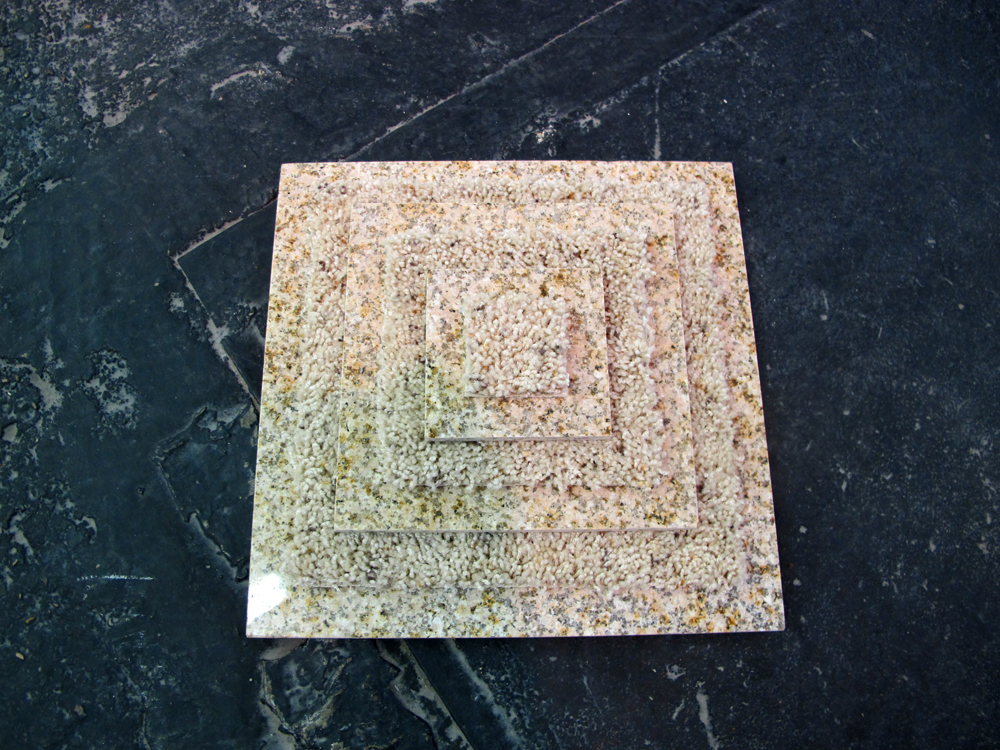 The show invites us into a specifically narrow realm of imagination where the work aims for deliberately short of spectacle. This carpet/tile step pyramid in the “Daydream 1-9” series is a simple juxtaposition of such familiar materials that your eyeballs struggle to focus on and make sense of it. In contrast to his many of his works that stop at a one-step, slight manipulation, this work pulls a full trick on your eyes and completes a disarming transformation. 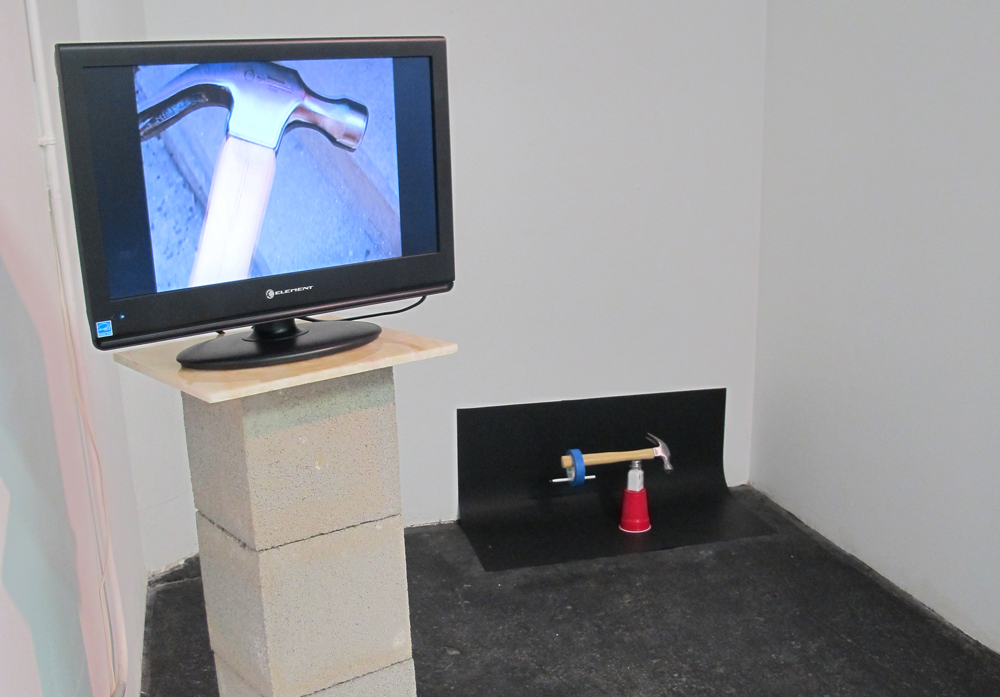 This hypnotic tension happens also in “Focus” in which Kwok takes a walk about, hammer in hand, camera focused on hammer. The ground blurs past in repeated concrete patterns, cracks, sediment, pebbles- all become a kind of white noise, at times transcendentally lovely. I watched “Focus” through more than twice, and after twenty minutes I had some real dissociating moments with that hammer, the way when you repeat a word over and over again it becomes unfamiliar. I kept thinking “If all you have is hammer every problem looks like a nail.” I can’t tell if Kwok is deliberately working with clichéd sayings in his videos in the same way he uses clichéd materials in his sculptures and clichéd images in his prints, but I couldn’t get them out of my head.

The video was compelling, but behind it is a sculpture that balances a hammer, a salt shaker, blue tape, a bic pen, and red solo cup. As he approaches the sculpture at the end of the video, he sets his camera down on a cardboard tube. That tube tripod is way more interesting than the sculpture itself because it’s a creative use of an everyday material, whereas the posed sculpture just seems like a forced ironic readymade. The video is meant to illustrate an interesting algebraic formula he’s working on about identical spaces in geographically distant places, but the sculpture, the ambiguous editing and lack of consideration for sound are distractingly frayed edges in a conceptually tight line of inquiry. 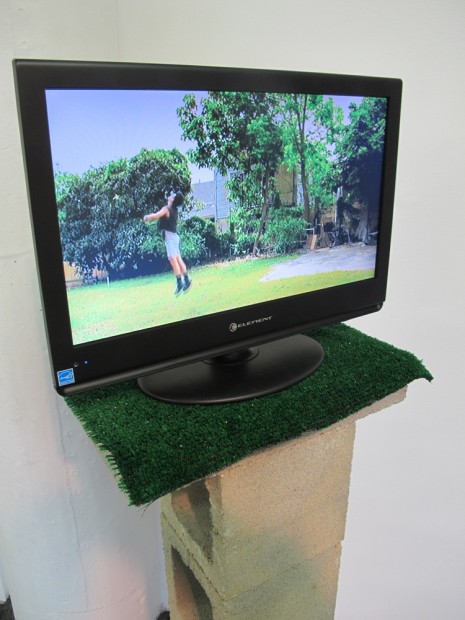 In the video “Searching for a New Impossible” Kwok begins a leap in one spot then lands it elsewhere, impossibly further. As in Yves Klein’s 1960 “Leap into the Void,” we all know it’s a simple edit, but the trick is seductive anyways. All the perfect aesthetic clues for a new vocabulary of enchantment are present. Mustachioed, undershirt-and-cut-offs-clad Kwok performs his teleportations in a gorgeous but humble backyard. It is raining which creates this kind of rushing mysticism, a perfect coincidence that supports the illusion.

Yards like where “Searching for a New Impossible” is set are common paradises. “Leap” the video is set on astroturf on top on cinderblocks. “Leap of faith” is the cliché stuck in my head on this one, and the astroturf is a wry prerequisite to sentimentality grounding a scene of sincere beauty. 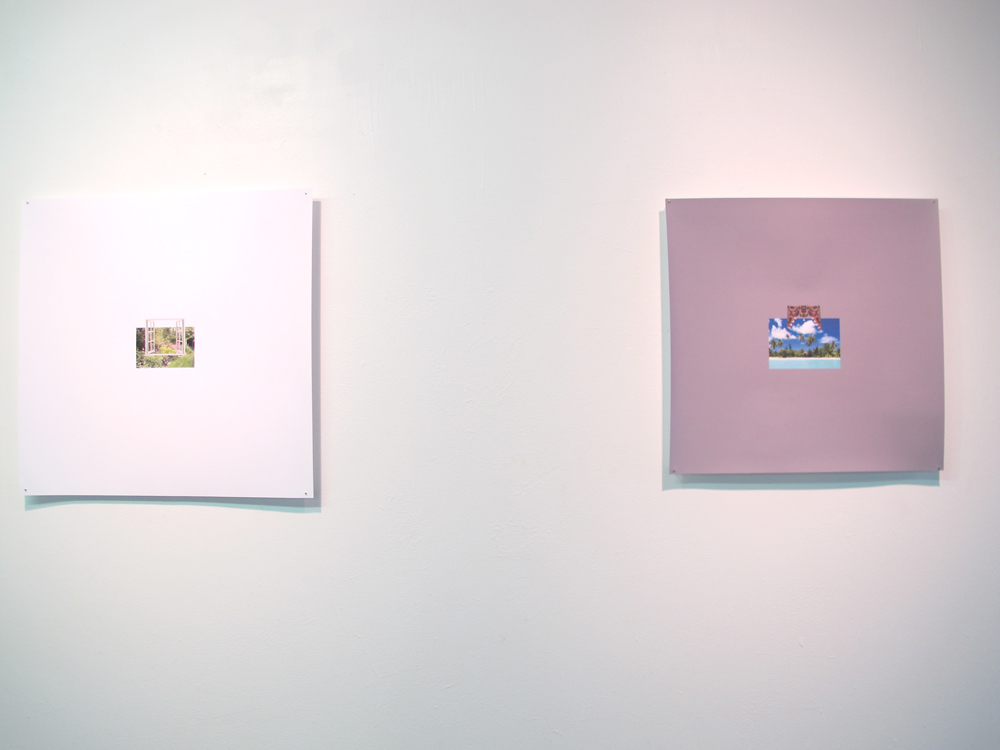 Kwok’s prints are the first things that greet you in the space. He describes them as investigating “the construction of view” or as he calls it “anti-crop,” but I find them so representative of stagnant art world one-liners (“utopia is a myth”) that they are like wallpaper of hipster imagery where the stock images fail to make more than stock art. Formally they recall Martha Rosler’s “Bringing the War Home” series, but without content or contrast, just cynicism. I can’t tell if they are Kwok’s actual investigations, or just meant as a sarcastic bookends to the levity in his video and sculptural work. 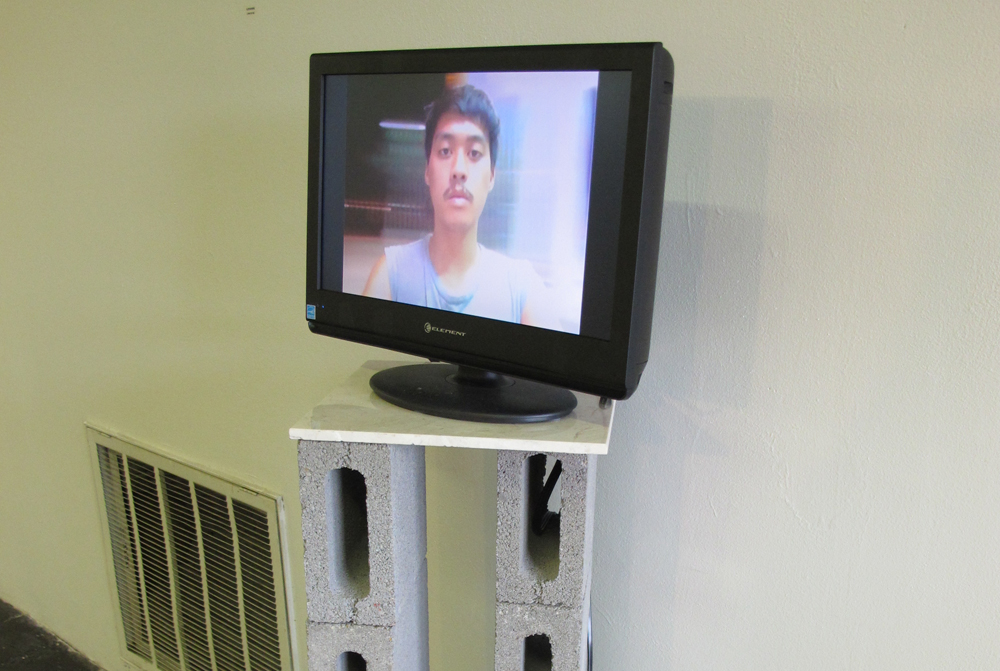 In “Elsewhere,” Kwok apparently sits on a spinny office chair, directing the camera at his deadpan face while his surroundings whiz by.  Discerning gym, classroom, coffee shop from smears of light and sound makes them more interesting as generic, recognizable types than unique places. It is another meditation on focus and how much we can know about a person when teased with glimpses of the environments they frequent.

Shown on Kwok’s website is “Level” in which Kwok and Skype participants go around their homes showing one another common features; sink, shower, doorknob, stove. It is oddly intimate and compelling to watch, like a domestic version of “I’ll show you mine in you show me yours.” It also loops participation in a way that feels relevant, reciprocal, and interestingly weird.

With Social Practice widely discredited, all of us suspicious of mass media spectacle, and sober sarcastic work like Claire Fontaine’s at the forefront, the climate that my generation makes art in takes cynicism as a given, as a pedigree even. This is the context in which Kwok’s work finds just ample slivers for imagination. Kwok’s work is quiet enough to pass, but just brave enough to be interesting- surreptitiously hopeful, even. Taking the clichéd, ubiquitous, and dull as his foundation makes his leaps of faith just a tiny bit heroic. Not heroic in the way that sets off a fire alarm for immediate deconstruction, but heroic in that snarky and subversive way allowed nowadays. Sincere is a hard place to get to in art, and Kwok does it smartly.

I’m wondering if you can talk more about this line:

With Social Practice widely discredited, all of us suspicious of mass media spectacle, and sober sarcastic work like Claire Fontaine’s at the forefront, the climate that my generation makes art in takes cynicism as a given, as a pedigree even.

I wonder how or where you’ve see Social Practice art as being widely discredited. I’d love to hear more about this point and see how you came to that conclusion.

The rest of my reply was 500+ words and had links which I can’t include in a comment. I’ll ask Kelly if I can make a whole post on it.

For the record, discredited or not I obviously do not agree that social practice is invalid, and I find lots of interesting and valuable projects still happening.

Art that uses everyday objects are interesting to me. I’m still coming to terms with the depth at which they impact me most. Is the alternative view they give me to my own inner world in my own representation of such matter. Or is the tricks they play with the outer physical reality.