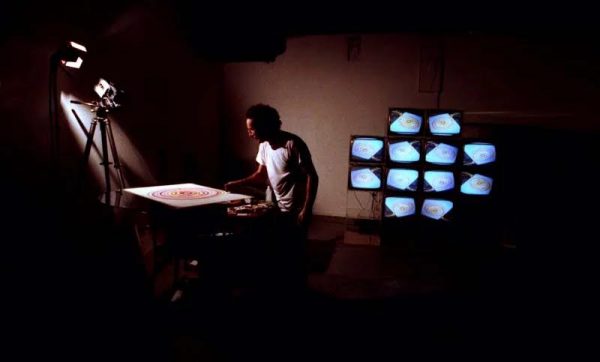 The late Houston artist Andy Mann with one of his spin paintings and video mandalas. From Ben DeSoto’s portfolio The Significance of Making Art, which consists of 170 portraits of Houston artists. The Significance of Making Art was exhibited as part of the No Zoning show at CAMH in 2009. A visual essay about art and art making, it was in part a response to Nan Goldin’s exhibition and book The Ballad of Sexual Dependency.

Artist Andy Mann died of pancreatic cancer on Saturday, Februrary 3, 2001 in Houston. Born June 19, 1947 in New York City, Andy received his BA from New York University and served as a Sonar Technician in the U.S. Navy from 1965-69. The first exhibitions of his video work came soon after at Leo Castelli Gallery and The Kitchen in New York, and he was included in the Whitney Biennials of 1973 and 1975.

In 1974 he moved to Houston, and was actively involved with the visual arts in Texas until his death. He first exhibited his drawings and a video installation in Houston in 1977, at Ann Robinson Gallery. In the subsequent 23 years he exhibited work at numerous museums and galleries, including the McNay Art Muesum in San Antonio as well as Diverseworks Artspace, Lawndale Art and Performance Center, and the Contemporary Arts Museum in Houston. He has permanent installations of video works at the Texas Children’s Hospital and The Children’s Museum, both in Houston. His Downtown Video Tree appeared every holiday season from 1989-1998 in Tranquility Park, in front of Houston’s City Hall.

In 1998 Andy exhibited Andy Mann Video Theater at Houston’s Aurora Picture Show. The following is a statement that he wrote for the program:

“How sad it would be, gentle viewer, if you were locked up in a closet with no opportunity to display the magnificence of your personal energies. So much of your potential would be wasted, so much potential energy never going kinetic. How devastatingly sad it would be, especially for you.

“The video tapes of Andy Mann suffer from this exact tragedy; they exist but not at the full level of their potential. To cease this grievous waste, Andy Mann Video Theatre presents a forum in which the potential video from Andy Mann’s closet becomes kinetic video within 15 yards of your retinae— the gateway to your central nervous system!

“It is for this reason we have maneuvered you here, that we have tricked you into coming here tonight, not for your benefit, but rather for the benefit of these miserable video tapes which languish in a vile vacuum of immobility, the dust bin of history writ small.

“You may never have another opportunity to see these video tapes, but even more frightening for them, is the near certainty that if you don’t watch them, no one else will. Therefore, on behalf of the Aurora Picture Show and Andy Mann Video Theatre, let this document serve as your receipt and as a souvenir of time served in the amelioration of the lonely condition of these long-buried almost-alive video relics.”

Turn on the Ice-Maker and Warm up the...

LOVE. I loved him, I loved his circle paintings, I loved the nice things he had to say about family and former lifestyle incarnations etc. One of a kind.