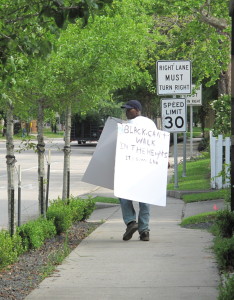 Pedestrians are becoming more common along Studewood Street in the highly gentrified Houston Heights, especially around the intersection of 6th St. New bars, restaurants and a bike trail have upped the steet-level amenities in recent years.

But not for everyone. This morning, one walker, a middle-aged black man in a white T-Shirt and jeans, was wearing a sandwich sign: “BLACK MAN CAN’T WALK IN THE HEIGHTS – IT’S SOME LAW” The man, who identified himself as 27-year Heights resident K. Moss, said that his protest was in reaction to an incident last week in which he had been stopped and harassed by a District 1 constable while walking to work, a block from Studewood and 6th.

“It’s like we’re going back to the 60’s,” said Moss, who says he will walk the Heights every morning before work. He plans on improving his sign, too: he’s going to add a target.

Agree. Posts on the neighborhood website, NextDoor, indicate a high degree of paranoia.

I own a house in the heights,i go through the same thing,i learned when a neighborhood becomes gentrifed law enforcement is used to scare off blacks.last year the new york times did a story about a cop was texting burn baby burn,a club in east austin was on fire.that area is going through gentrification and this year there was stickers put in the area saying blacks are not welcome here,even though east austin was a black neighborhood.google gentrification YouTube people in other cities are going through the same thing.

Prejudice never seems to stop. Even when a Man is trying to work , ignorance takes over. The investors have purchased most of the old houses in the Heights in order to keep blacks out. Be careful Mr. Moss the cowards come from the back. This is America 2015 and because of the color of our skin we have to deal with pure ignorance

Stand strong Mr Moss. Ignorance still exist. Law enforcement has the largest amount of prejudice, and more cowards than any job around. I knew years ago that when the investors started buying out older homes in the Heights things would get worse. I believe 2015 is the year of cowards.
We can walk on any public street .