Asel Art Supply, a Texas-based art supply company, recently announced, via social media, the impending closure of all six of its locations by December 31, 2022. 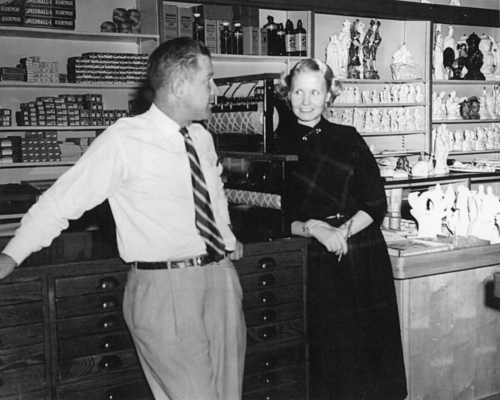 Originally founded in 1951 in Dallas by Kenny Asel, Asel Art Supply has been a longtime staple for artists across the state. In the mid-1960s, a second Dallas location was opened. Mr. Asel and his brother, Herb, oversaw the business until 1973, when they sold the company to a group of investors. In the mid-1970s, the business expanded with locations in San Antonio, Arlington, Fort Worth, Austin, and Lubbock (as Varsity Bookstore, a college bookstore serving Texas Tech University).

Like many businesses, in March 2020, during the early stages of the COVID-19 pandemic, Asel Art closed the doors to its stores and transitioned to curbside pickup. That May, the business announced the closure of its Austin location due to “the continued rising costs of operating a business in Austin.” Then in June 2020, all remaining stores reopened to the public.

In August 2022, just weeks after being named Dallas Magazine’s 2022 Best Arts and Crafts store, the business announced the closure of its Dallas location, effective September 20, 2022. At the time of the social media announcement of the Dallas closing, the company was adamant that “All other locations remain open!” 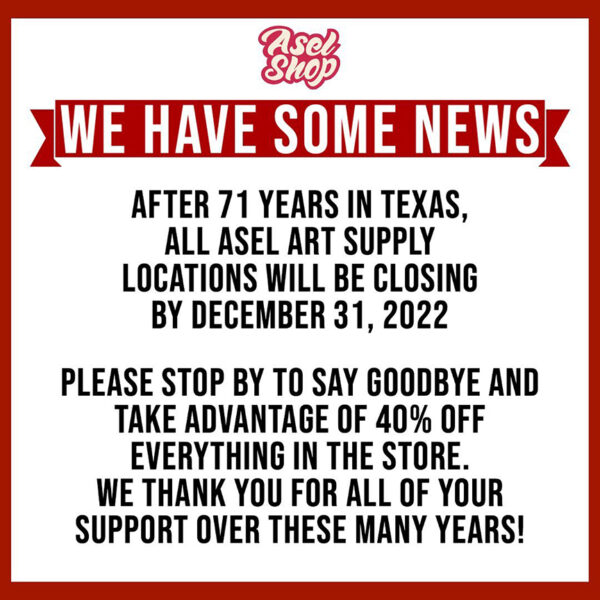 On Friday, October 21, 2022, Asel Art made the announcement via Facebook and Instagram that all of its locations will be closing by December 31, 2022 and that everything in the store will be offered at a 40% discount. The announcement was met with disbelief and sadness from many longtime patrons. Hundreds of people left comments remembering the decades they have shopped at Asel Art, past experiences working at the company, and acknowledging the company’s support of artists through the years.

The closure of all Asel Art Supply locations means that many of the cities formerly served by the company will now have access to one fewer independently owned art supply store. While in general, shoppers have shifted their purchasing habits to online retailers, arts and crafts chain stores like Hobby Lobby, Joann Fabrics, and Michaels, which was founded in Dallas in 1973, will be the main remaining source of in-person shopping for artists. Additionally, over the last two decades, Jerry’s Artarama, a North Carolina-based discount art supply store, has opened locations in Austin, Houston, San Antonio, and most recently in Dallas (2021). The closure may be most precarious for Varsity Books, which is no longer buying back textbooks, selling e-books or renting course materials to Lubbock-area students.

My dad opened the store. Two years later I came into this world. In 7th grade my dad put me to work . From that time on I worked every summer first delivering art supplies to clients . In college through graduate school and seminary. He died on Christmas eve in 1986. I miss him every day

I knew your dad, personally, as he would come by the various agencies I worked at over the years, to see if we art directors needed anything we didn’t order previously. We always loved to hear the latest industry gossip and jokes he would tell the staff. He was such a fun guy to be around. R.I.P., Kenny.

This news has hit the Fort Worth community hard. We have relied heavily on having an ample and varied supply of quality materials close at hand. The loss of the expertise of the artist managed and staffed team who work there is even more sad.

The chains can’t hold a candle to Asel. What a loss.

One of the things I loved about returning to live in Fort Worth was I’m just 5 minutes from Asel. I always enjoyed talking to the young artists on staff while browsing for things I needed (and many I didn’t). The big box stores carry only a limited variety of supplies and there’s no one with any expertise. The websites are fine, but if I asked nicely at Asel I could test a color before buying…the computer won’t do that. A sad loss for the art community

I have been a longtime customer of the San Antonio location at Grandview Center on Callaghan. John, the manager has consistently been helpful to both me and for St. Mary’s University where I teach. I will miss stopping in and picking up supplies and swapping stories and laughs. Thanks John and his crew! BSJ

Thanks also to Lisa, manager at the Austin location on Martin Luther King Blvd. She was always a big help in finding various supplies and weighing the possibilities of the different choices of paper hanging vertically, spinning around on a big circular rack.