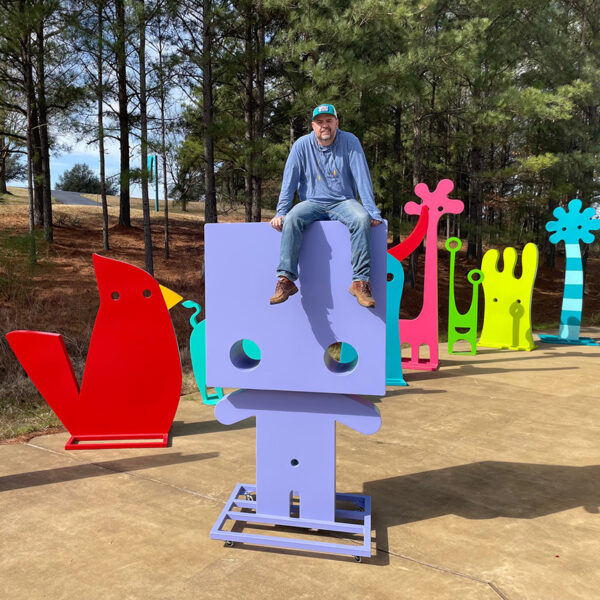 Jeffie Brewer at his studio. Photo courtesy of the Artist

If you have been anywhere near the downtown area of Palestine, Texas since the spring, you must have stumbled upon at least one of Nacogdoches-based sculptor Jeffie Brewer’s works. They’re large in size and bright in color, and there’s practically no way to miss them.

Coming Home, organized by the Dogwood Arts Council and unveiled at this year’s Dogwood Art and Music Festival in March, features 13 large-scale outdoor works by Brewer around the town’s center as part of its ongoing Art Tracks sculpture project. Ranging from a yellow dog to a turquoise unicorn, the artist’s stylized steel sculptures are placed in highly visible locations throughout downtown.

A Palestine native, Brewer grew up the son of former local junkyard owners. It was during this upbringing where he developed both a love for the banal and a variety of industrial skills, ultimately influencing his present-day artistic career.

“Jeffie’s being from Palestine was super special, as we are celebrating ten years of the Art Tracks program,” said Dogwood Arts Council president Greg Gunnels. “Each sculpture has a story and gives one a reason to pause.” 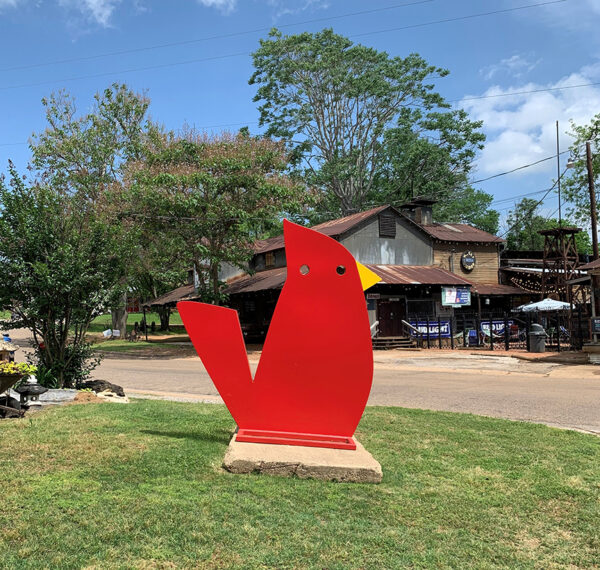 Described by the artist as a self-portrait, a purple robot, along with a striped sculpture resembling an unknown creature, frame the city’s “Historic Downtown” mural near a seating area. Several other works, such as a six-foot-tall turquoise pig and a seven-and-a-half-foot-tall red cardinal, are placed around in communal green spaces on concrete pads. Forming somewhat of a trail, all of the sculptures are within walking distance of one another.

Initially started in 2012 by the organization Palestine Tomorrow, Art Tracks has been a popular annual exhibition of outdoor sculpture, attracting both artist participants and visitors from far and wide. After recently being helmed by the city for a few years, Art Tracks has now become the sole responsibility of the newly-formed Dogwood Arts Council.

Coming Home is far from Brewer’s first foray into public art. In addition to private collections throughout the United States, his work can be found in several public spaces, including municipal public art collections. Brewer has also been featured in several outdoor exhibitions, including Color Field, which was organized by the Crystal Bridges Museum of American Art in 2019 and traveled to The Baker Museum in Florida before concluding at the University of Houston. 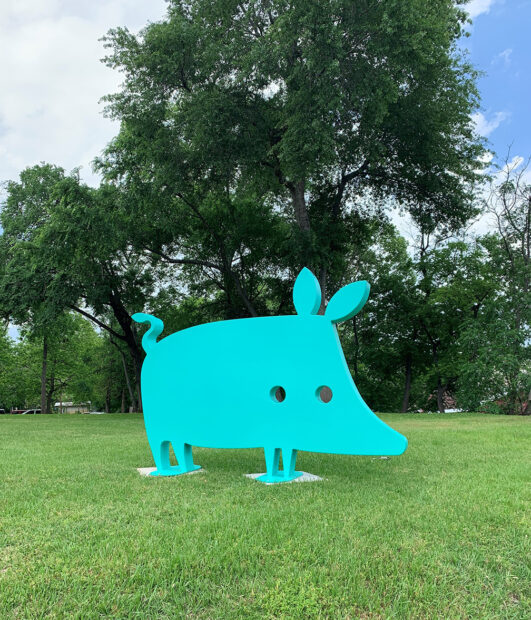 “Public art is my mitzvah,” said Brewer. “I placed one of my first big pieces several years ago in a park. I was cleaning up and packing my truck when I noticed these two kids running in circles around the piece, laughing and hugging it in a general state of bliss. Since then, I have seen this act out countless times with young lovers, pondering seniors, and confused fellow rednecks.”

“I have always tried to use my sense of humor in most of what I do — straddling the line of whimsy and whatever,” Brewer continued. “I make stuff that makes me happy, and I hope it translates to others.”

Coming Home will remain on view through early 2024. A list of the featured sculptures along with accompanying descriptions written by the artist can be found here.