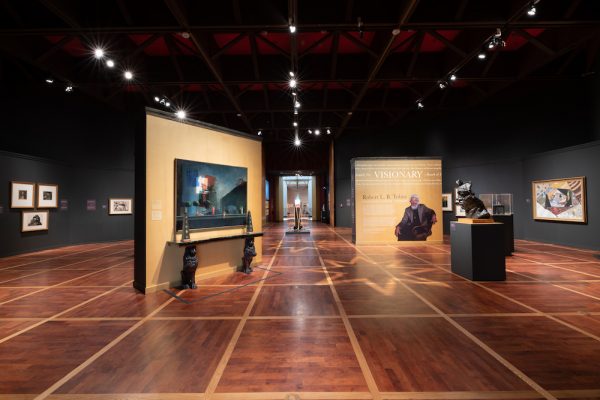 The Tobin family is perhaps the most significant culturally philanthropic family of the San Antonio region. Its collective contributions range far and wide, from the Tobin Center, San Antonio’s first big-city-level performance space, to the many gifts and donations to the McNay Art Museum and San Antonio Museum of Art. Robert Tobin — the beloved, colorful, bon vivant and collector extraordinaire — left his impressive collection of Theatre Arts to the McNay over a period of 20-plus years starting in 1984. For the last 15 or so, many of these works have remained in storage and have never been seen by the public. For the McNay’s current show, titled Robert L. B. Tobin: Collector, Curator, Visionary, Scott Blackshire, the creative and ambitious Theatre Arts curator of the McNay, uses each section of the show to stretch and redefine the parameters of “Theatre Arts.” Blackshire went through the McNay’s trove and created a freewheeling and dazzling exhibition that reveals surprising associations and references, and doubles for a lush curtain sweep of multifaceted aestheticism. 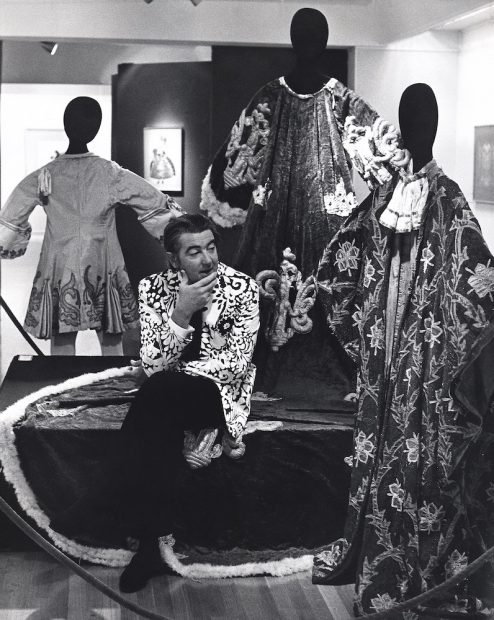 “Theater Arts” or “Theatre Arts” is generally anything involved with the production of a stage performance (play, opera, musical, ballet, etc.), including character and stage sketches, costumes, stage design and background paintings, and so on. But Robert Tobin, and this exhibition, view Theatre Arts through the lense of “All the World’s A Stage,” including inspiration (symbolic and aesthetic) depictions of the creators, composers, and actors, and what can be generally called the life ephemera of a soul whose time on earth was single-mindedly committed to the pursuit of culture and beauty. 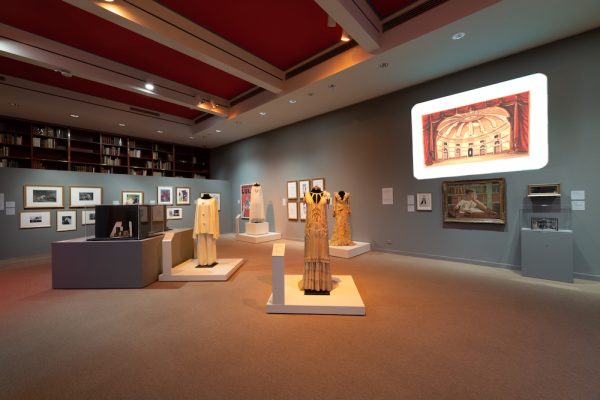 Upon entering the exhibition, which is in the library wing of the McNay that houses Tobin’s collection of rare Theatre Arts books, there is a nod and recreation of Tobin’s own salon where he was known as a gregarious host. Pictures of Tobin in his colorful shirts and scarves are placed throughout, as are quotes by Tobin on his philosophy of art and creativity. This is a personal show, and there’s something comforting about that in the age of overarching, research-based shows. 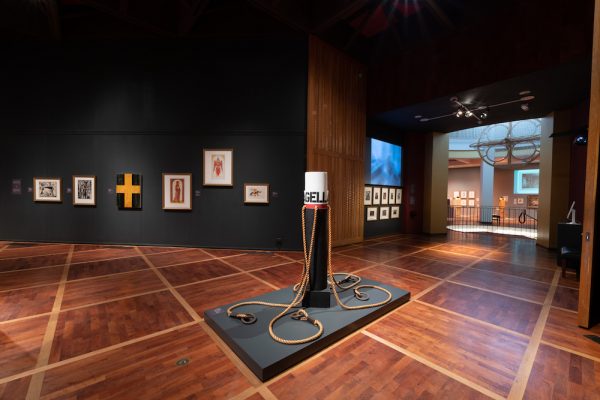 Throughout the show, Blackshire places pieces into a dialogue — an ineffable harmony between works. Take Robert Morris’ ​Untitled,​ a roaring, inferno-like pastel from 1983-1984 in one of the most remarkable frames I’ve ever seen — an embossed thatch of intertwining lacquered branches resembling a pyre. In the same zone: Paul Cadmus’ ​Narcissus: Study for an Homage to Caravaggio, a​ piece filled in with color crayon 20 years after its initial tempera-and-ink creation in 1963. The pool Narcissus stares into, through association, becomes Morris’ pastel inferno — the fire of the soul. Next to these two pieces are three works for stage productions of Hamlet: a classical sketch by Edward Gordon Craig from 1905, a piece for an experimental Hamlet from 1976 by Kert Lundell, and a costume design sketch of Hamlet from a 1996 production by Robert Perdziola. Hamlet is itself both a play and a “reflection” of Narcissus, in particular its famous “To be or not to be” monologue. The sequence illustrates Tobin’s voracious and expansive mind and aesthetic, and simulates the creative process of understanding Theatre Arts, with its churning melange of different artists, times, and associations. 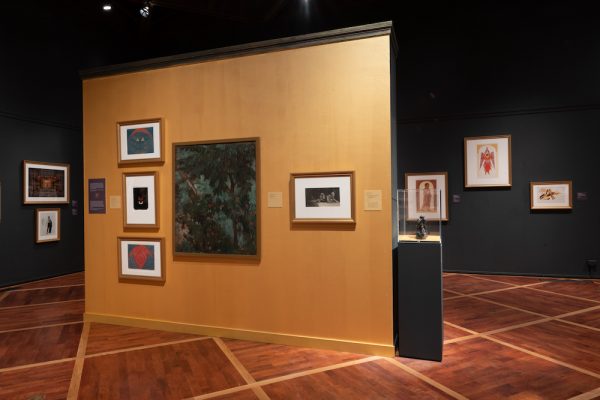 This clever dynamic repeats throughout the show in unique sequences of associations and parallels. Robert Kelly’s The Passion V (1995) is a stark yellow cross with a sprinkling of blood red on a pitch black background. It’s placed near lush works by Russian legends Natalia Gontcharova and Léon Bakst of stage performances involving the Passion story and the martyr Saint Sebastien. The chasm between Kelly’s austerity and the gorgeous, intricate works by Gontcharova and Bakst articulate the myths of religion, its gauzy dreams and resplendent characters, and the brutal genesis of martyrdom. 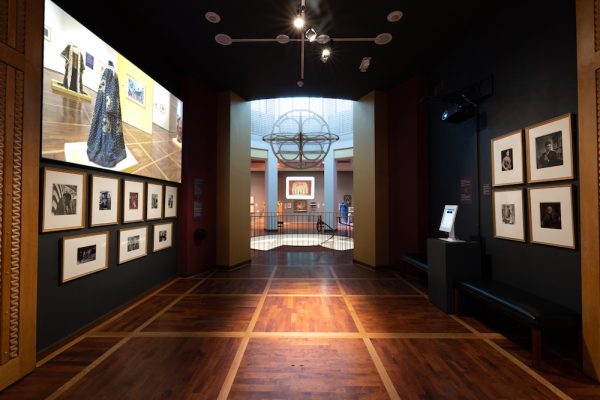 One of the pleasures of the show is that you don’t have to be knowledgeable or really have any interest in Theatre Arts or Robert Tobin’s life or collection. There are so many jewels and treasures here one has never seen before, let alone knew existed, and it is almost impossible to not be beguiled. There are works by Paul Klee and Claes Oldenburgh; there is a rare photograph from 1910 of the legendary dancer Vaslav Nijinsky, and a bronze sculpture from 1912 of him; there are two portraits of Stravinsky — one by Eugene Berman from 1969, and one by Jean Cocteau from 1913 (never have I felt such-Gollum like covetousness for a piece of art in a museum) — and on and on. 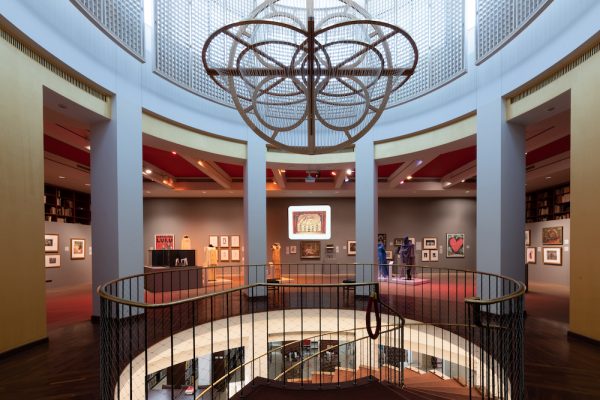 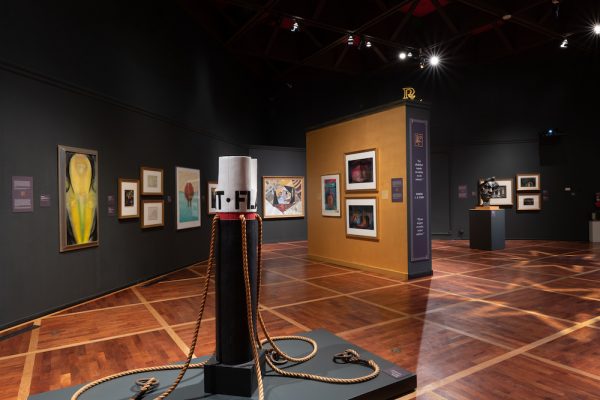 Perhaps the most special piece is by the 17th century artists Giovanni Giorgi and Giacomo Torelli of a stage design for the opera ​Il Bellerofonte. T​he palace chamber depicted in the design seems to telescope and recede. Looking at this work and the works throughout the show conveys the wonder and enthusiasm Robert Tobin had for the arts, and how Theatre Arts are not simply the trappings of stage design, but the assemblage of entire worlds that span history — a glittering palace hallway that goes on forever.

Through August 23, 2020 at the McNay Art Museum, San Antonio. The McNay is currently open to the public, with safety protocols in place.