Tiger King and The Candied Abyss 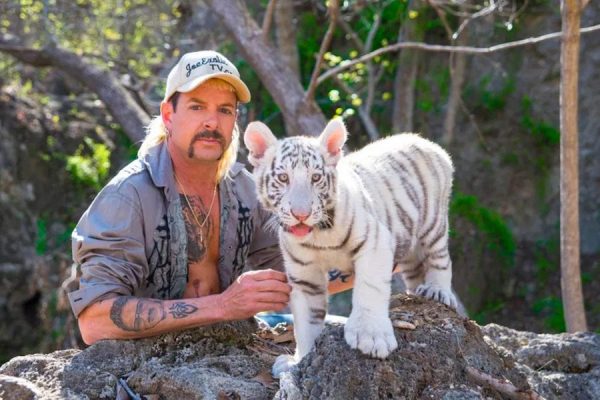 Tiger King hit a sought-after zeitgeist for a streaming series — we are all social distancing, and a batshit docuseries about extremely twisted people who run private tiger zoos appeared in our queue. Of course everyone watched. Tiger King immediately hooks you with its time-shifting chronicle of Joe Exotic, a mulleted, gay, meth-addicted impresario who runs a tiger zoo in the backwoods of Oklahoma with a cast of ne’er-do-wells and ex-cons, plus Carol Baskin, Joe’s nemesis, who campaigns against such private big cat zoos while she runs a “sanctuary” in Florida that is suspiciously similar to Joe’s set up. There’s also a lot of Bhagavan ”Doc” Antle, a perverted new-age guru of sorts with a tiger zoo and a harem of women who work serf-like hours for him and who he has renamed.

Things begin buoyantly, aside from the obvious and rampant animal abuse. The tigers aren’t beaten, but to see such majestic creatures cramped in cages and corralled around for human entertainment is unsettling. There are around 4,000 wild tigers in the world (e.g. those living free), and between 5,000 and 10,000 tigers in captivity by private owners in the United States. The strange, blackly comic, and particularly American horror of this is articulated in Tiger King. The bounty of the world is not only in the hands of the aristocrats, but also in the unique, utopic fiefdoms of all our petty little tyrants. Only in America.

Throughout the seven episodes, the show slowly transitions from a somewhat guilty and hilarious pleasure to something much darker. Joe’s two husbands—previously “straight” much younger handsome country dudes, are seduced and then destroyed by Joe’s meth. One loses almost all his teeth; another shoots himself in a drug-fueled mania — a horrific scene caught on a security camera. Jeff Lowe, a dead-eyed, Oakley-wearing creep who uses baby tigers as literal bait to set up threesomes in Las Vegas with his various girlfriends (polyamory comes across very poorly in Tiger King), ruthlessly takes over Joe’s operation. Joe eventually descends into meth-fueled madness and paranoia and tries to have Baskin murdered. He is arrested, and is currently in prison (where he’s contracted Coronavirus). The end.

Finishing Tiger King came with a pang of regret and sadness, like polishing off a giant plate of fries or a pint of ice cream alone. I wondered if such works as Tiger King or American Movie or Paradise Lost, which cast their sordid tales of American Grotesque from an intellectual distance, are much different from the earlier gleeful exploitation of Jerry Springer, or the myriad reality trash from Vanderpump Rules to Love After Lockdown. I think the answer is that one type of entertainment wears a turtleneck and tortoiseshell frames, and the other cargo shorts and a flat-brim hat. Both reveal (and revel in) the misfortune of desperate, thirsty strangers. All such shows and films are tinged with this cruelty, and thus, on some elemental level, are even more unsettling than the bleakest Bela Tarr film.

I do believe that Tiger King and all the rest, despite their exploitative cores, perform a sort of memento mori — the slave who whispers that “all this will someday be gone” in Caesar’s ear as he rides a chariot through a triumph. There is a certain type of narrative movie that bombs spectacularly — Vice, The Counselor, Killing Them Softly — where the film was simply too unsparing, unsentimental, and caustic to be taken straight. Reality TV, with its candied gauze of absurdity and hierarchies (after all, you’re not as trashy as those people) sneaks in similar acidic truths. Survivor is about the limitless rapacity and ruthlessness of humans in the pursuit of fortune; all the dating shows are about the relentless humiliation intrinsic in romantic love; Vanderpump Rules is about how the resilient delusion of exceptionality can keep a dream that is really a nightmare going for years, or even decades.

And Tiger King is about how, while we think we are the hero of our own movie, we’re actually merely one villain of many in a rogue’s gallery that just drifts on and on, like a steadicam tracking shot. In a way, it’s actually pretty funny. And all this will someday be gone.

I hope someone will produce Tiger king the musical comedy. It would be somewhere between Disneys
Lion King and the Best Little Whore House in Texas.