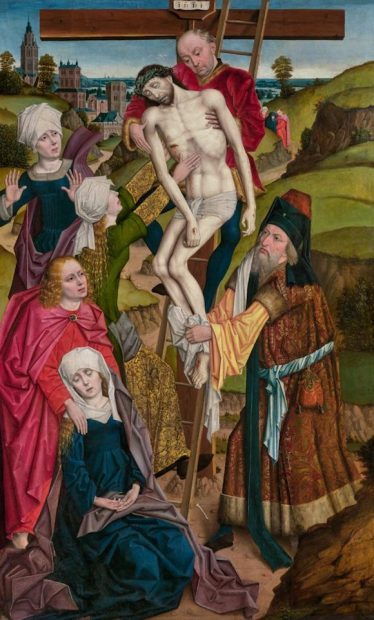 Earlier today, the Dallas Museum of Art announced its acquisition of the circa-1480 painted panel The Descent from the Cross, by German master Derick Baegert.

Writes the DMA: “As the inaugural acquisition of the Marguerite and Robert Hoffman Fund for pre-1700 European Art, this masterpiece of Northern European painting is the first work of its kind to enter the DMA’s holdings and is the first work by this artist to enter a US museum.” The large panel is “an exceptional example of Baegert’s distinctive style, which reflects the transitional period between medieval and Renaissance painting.”

The Marguerite and Robert Hoffman Fund was launched in 2013, through the establishment of a $17 million endowment, in order to “expand and enhance the Museum’s collection of European art, primarily of the Renaissance and Baroque eras.”

Derick Baegert (c. 1440–c. 1509) was a master of late Gothic painting. Writes the DMA: “Successful throughout his lifetime, Baegert was the head of a family of painters and became the master of a large workshop in the Rhineland area of Germany during the last third of the 15th century and first third of the 16th century. While he borrowed elements from Netherlandish art, his style remained close to that of the late Gothic and reflects a transition from the late medieval period to the early Renaissance.”