Can a college kid run for congress on an anti-art platform? 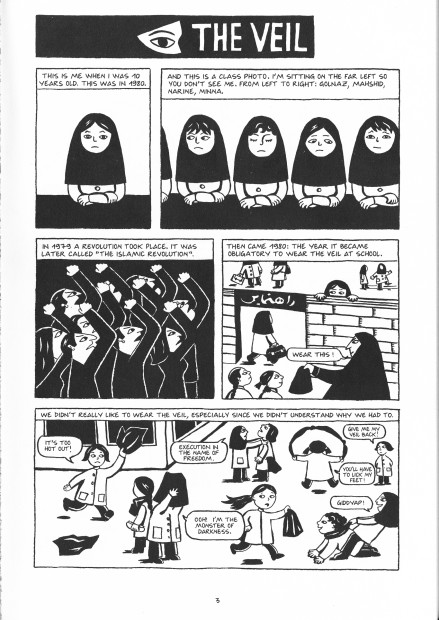 A page from Marjane Satrapi’s “Persepolis.”

This week a news report out of Southern California went viral on the internet: a 20-year old community-college student named Tara Shultz has called for the ban of four graphic novels—all acclaimed milestones of the form—that were on her class syllabus. She and her parents contend that these award-winning books are “pornographic” (this was weeks after the class started and she had a detailed syllabus in hand); the family staged an actual campus protest. The class at Crafton Hills College in San Bernadino County is an English 250 course (taught by a professor named Ryan Bartlett who has used the syllabus for several semesters without complaint) and is specifically described as “the study of the graphic novel as a viable medium of literature… .”

Schultz had 14 other English 250 courses to choose from for fulfilling the same degree requirement. She claims she thought she was getting “Batman and Robin” because she evidently lives in a mental cave which shields her from culture, and despite the impression that English majors are actual readers, she seems to have never heard of the likes of Art Spiegelman or Alison Bechdel. (She also, presumably, means only pre-1989 “Batman,” and certainly the pre-Frank Miller “Batman” of 1986, even though Shultz was born in 1995.) “Pornographic” to Shultz seems to mean content that contains any sex and/or violence, no matter how truthful or useful to the story it is. 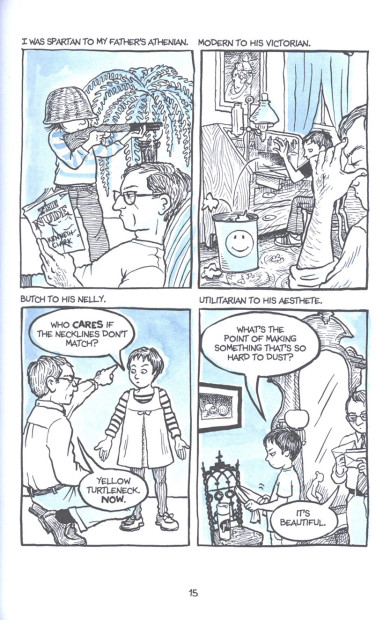 A page from “Fun Home: A Family Tragicomic” by Alison Bechdel

Indeed, Bechdel’s “Fun Home”–a chronicle of the author’s dysfunctional childhood and family life–is one of the books Schultz wants banned (note: its Broadway production just won the Tony for Best Musical), along with “Persepolis” by Marjane Satrapi (a memoir of the author’s time in Iran during the Islamic revolution); “Y: The Last Man, Vol. 1” by Brian Vaughan; and “The Sandman, Vol. 2: The Doll’s House” by Neil Gaiman. I assume Shultz also personally “bans” television, movies and newspapers from her daily life, given that two of these novels are non-fiction memoirs and the other two, while fiction, are social critiques.

You might default to forgiving her for what could be a “my sensibilities are offended” cry from an unsophisticated, sheltered woman-child whose parents hover around her every feeling in an anxious state of alert, but boingboing.net uncovered an interesting factoid in picture form:

Practice law and become a congresswoman, huh? The bullshit detector is loud on this one. Shades of a burgeoning Ted Cruz color this story.

Outrage sells. Politcally conservative outrage aimed at academics and creative people fares pretty well in our current environment. I suppose this English major has not read and does not appreciate Mark Twain, Judy Blume, Toni Morrison, Faulkner,  Vonnegut… . Or she has read them, and bitched about them in high school, only it didn’t go viral at the time. It might be fortunate (only for her) that she’s angling for a law degree. The legacy of literature is not in her corner.

Professor Bartlett has said in an email about the news (via Redlands Daily Facts):

I chose several highly acclaimed, award-winning graphic novels in my English 250 course not because they are purportedly racy but because each speaks to the struggles of the human condition. As Faulkner states, ‘The only thing worth writing about is the human heart in conflict with itself.’ The same may be said about reading literature. The characters in the chosen graphic novels are all struggling with issues of morality, self discovery, heart break, etc. The course in question has also been supported by the faculty, administration and approved by the board.

Shultz says of the novels: “I don’t want them taught anymore. I don’t want anyone else to have to read this garbage.” Somewhere in there she also uses the word “eradicate.” (Fire up them blowtorches, Ray.) What is her preferred reading material? 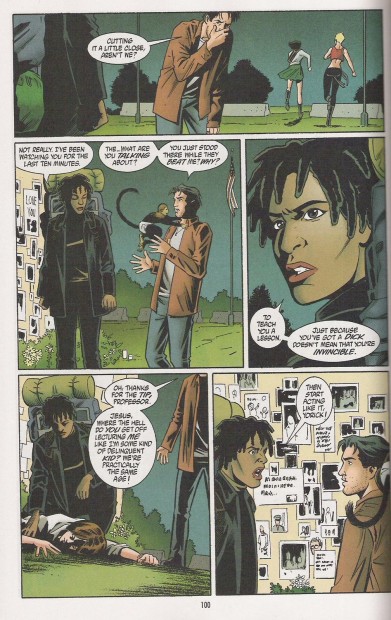 The fact that she waited weeks to sound her alarm smacks of one of three things: A) She didn’t bother looking at her syllabus before the class’ drop date, and her lack of attention to clear text does not bode well for her future as any kind of “lawyer,” B) one of her parents looked at her syllabus and decided to Google some titles and freaked out when they realized “college class” means “learning from a source that is not Fox News” or, C) someone in that family realized there was an opportunity here to boost Tara’s profile as a kind of right-wing activist and get her on the road to a career in politics. 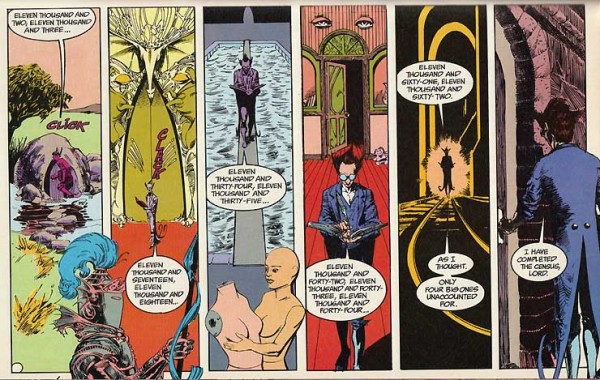 Page from “The Sandman, Vol. 2: The Doll’s House” by Neil Gaiman

Here’s what I think. I believe the family decided to turn this into a publicity stunt at the expense of the college, the teacher, and the artists who created these works. I believe that a 20 year old who calls works like “Persepolis” both “pornography” and “garbage” is not only NOT paying attention to the world as it actually exists, but is also wasting some other student’s place in a valid college course.

True to higher-education back-bending, the college has agreed use content warnings going forward. I simply don’t understand the point of going to college if you don’t want your views and perceptions challenged and your critical thinking sharpened. I’d love to think history is not on her side, but as colleges become corporatized and yield to conservative lobbying, and students are treated as trigger-shy consumers, I wonder. Shultz is still enrolled in the class.

Unfortunately, she’s also probably running for office at some point.

I partly support her crusade, as least as far as it applies to Sandman and Y: The Last Man. Not because they’re pornographic (I wish!), but because they suck.

P.S., it seems kind of strange that a visual art magazine would mention only the writers and leave off the artists in crediting collaborative work. Pia Guerra, Mike Dringeneberg and Malcolm Jones III are just as responsible for Y: The Last Man and Sandman: The Doll’s House as Brian Vaughan and Neil Gaiman.

She appears to me to be your typical, spoiled, American tumblr-fed feminist moron, who thinks their over-inflated sense of self-importance grants them the dubious authority to demand reality and art adjust to their fickle whims. Offended? Tough noogies. Grow a thicker skin. Don’t like that answer? Too bad. Welcome to the real world, honey, where everything is a matter of opinion, and your opinion doesn’t matter.

I got the impression that she was a very conservative reactionary, but nowhere in any of the articles does she indicate what her ideological beef is–just that she’s offended by nudity and torture being depicted in the comics she has to read. There is a bias in Western culture against images of sex and violence that doesn’t apply as much to written words about these things.

I don’t get the gratuitous reference to Fox News? When you twisted the commentary into a stereotypical liberal versus conservative mindset, you forfeited validity. Many a liberal has objected to Huck Finn.
Actually, where’s the story here? Headline: Student Whines About Reading!
I’ve had hundreds of students complain about what they had to read. So what? You have expanded a tantrum at the expense of a real story.

I guess life would be no fun if we couldn’t tear somebody down in order to make our point.