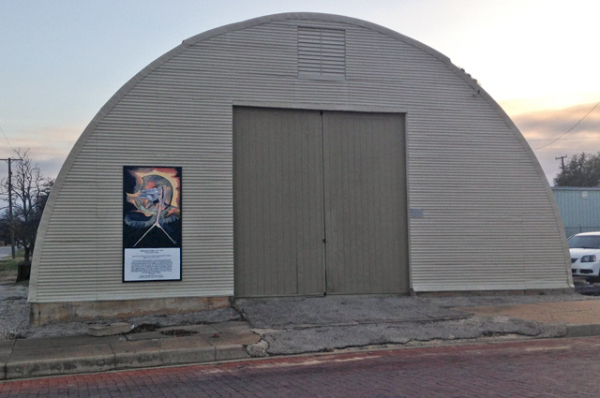 The pièce de résistance of the Outdoor Art Exhibit in Eastland, Texas, is a 12-foot-tall cylinder painted to resemble one of Andy Warhol’s Campbell’s Soup Cans. On the back is a paragraph on Pop Art. It’s located in the parking lot of the Dairy Queen.

Eastland is located about 100 miles west of Fort Worth. Named for a former Texas Ranger and one of Sam Houston’s lieutenants at the Battle of San Jacinto, Eastland was founded in 1891 and boomed in 1917 when oil was discovered. Since then, oil remains one of the prime economic movers, along with peanuts. The population has topped off at about 4,000. According to census data, Eastland comprises 2.8 square miles of land. The median family income is not quite $35,000. The town’s largest employer is a ductile iron castings manufacturer. The next is Walmart.

I reiterate these facts to suggest that it wouldn’t make a lot of sense for Eastland to commit the resources to acquiring, then displaying, even a single famous painting. The town does have a museum of area history, located in a former bank building across from the county courthouse. Other museums are planned, including a “Dignitaries” museum devoted to the “Ladies of Texas” and an “Antiques” museum of the “Victorian era.” But there is no art museum. Why should Eastland, Texas, of all places, have one? 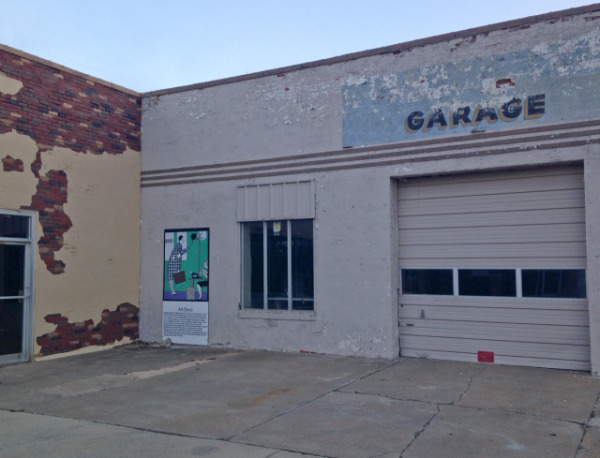 What Eastland does have is the Outdoor Art Exhibit, a collection of 34 or 41, depending on which web page you look at, reproductions of famous paintings affixed to the sides of pizza joints, credit unions, fire stations, hotels, and insurance agencies. The exhibit began as a project for an art history class at Eastland High, home of the Mavericks. Now, along with that Campbell’s Soup Can, you can see imitations of “Starry Night,” “Creation of Adam,” and “Ballet Rehearsal.” The reproductions are accompanied by biographies, too. You learn that Jackson Pollock, for example, “was an alcoholic and was very unhappy in his personal life. He spent many hours in therapy. He died a premature death in a car crash.”

I arrived in Eastland just before sundown and parked on the square across from the county courthouse. I wanted to see as many of the reproductions as I could. A block east of the square I saw “Three Flags” by Jasper Johns on the white brick of a Citibank drive-thru. Farther down the street was “The Ancient of Days” by William Blake. A dozen more were scattered around the square, one explaining Art Deco, another remembering 9/11. Another celebrating Dr. Seuss. 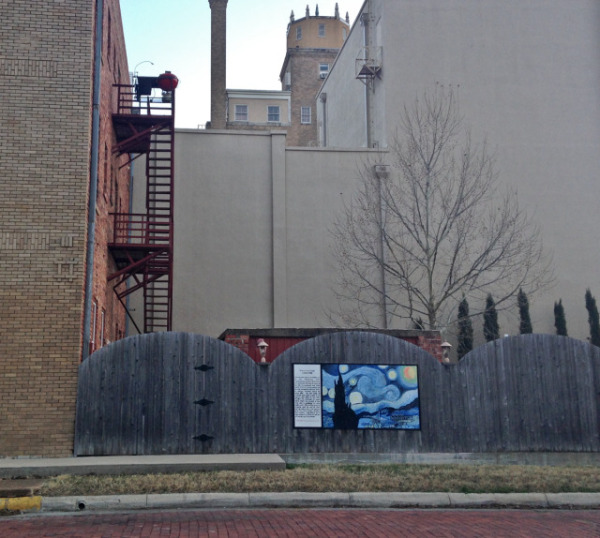 Van Gogh with fire escape at the rear of the Connellee. 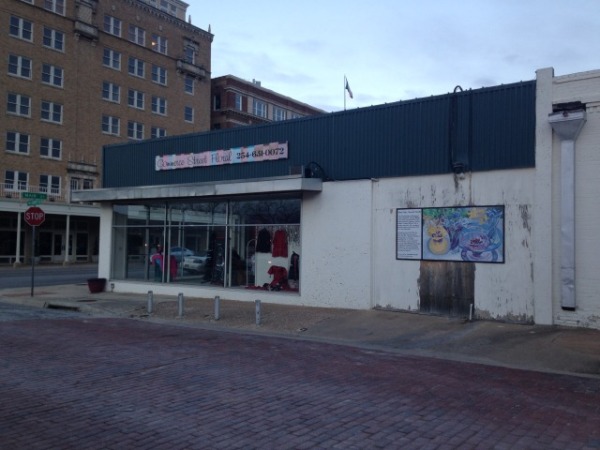 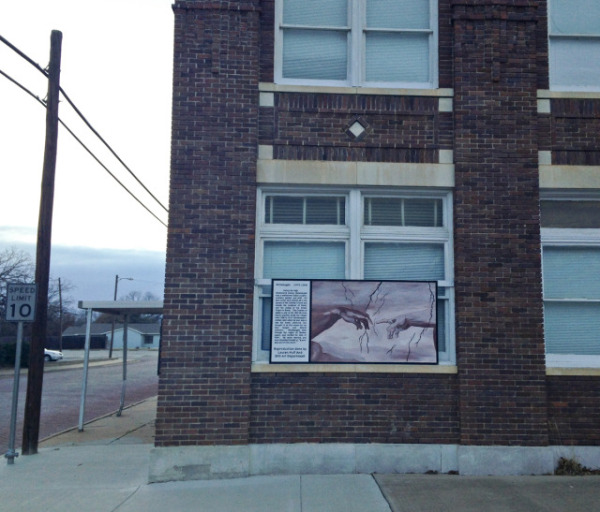 Wanting to see more, I drove from the square down a 2-mile stretch of four-lane Highway 112. There, “Mona Lisa” demurred just outside the front door of the Pizza Heaven, a Gustav Klimt outside Arther Business Products, “American Gothic” outside the Farmer & Merchants Bank. 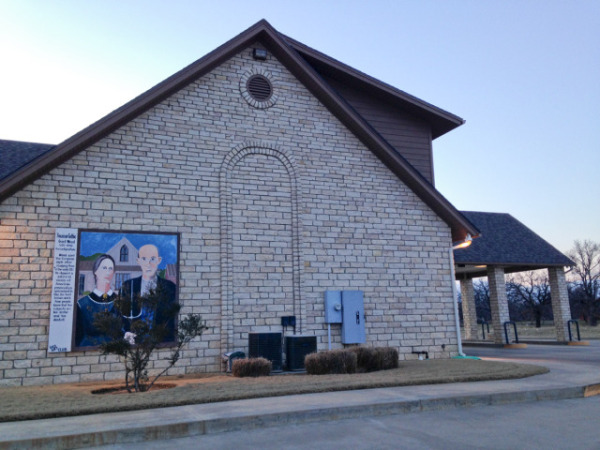 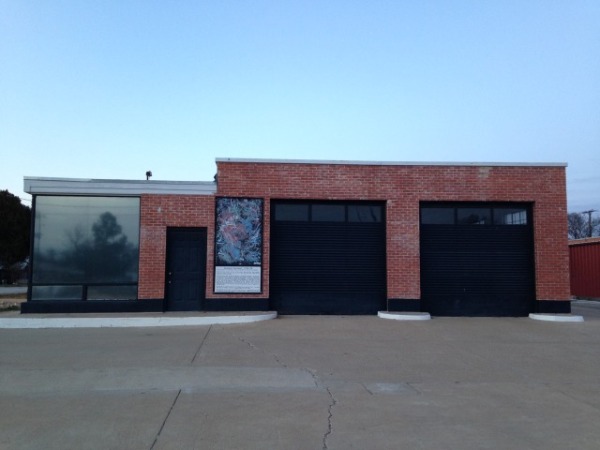 The exhibit reminded me a little of the Austin Art Boards project, in which local artists submit work to be featured on billboards throughout the city. That project attempts to alter the commercial landscape with art. In this case, though, the reproductions were often dwarfed by the signage of the buildings they were affixed to, creating a comedy (or tragedy) of scale. And more than half the reproductions were along a four-lane highway — not displayed so much as left outside.

There are many ways for a town to bring art to the people. (And just as many for the people to bring art to the town.) At first I idealized the possibilities of art fixed into the dailiness of Eastlandites’ lives. Wouldn’t we all stand to be improved if we meditated on “Mona Lisa” while we wait for our pizza to heat up? But museums shape and sequence space in a way that prepares their visitors for contemplation, education, delight. Even if it were the one and only “American Gothic” out there on the Farmer & Merchants Bank, it would lose its effect as you pull up in your Civic that needs an oil change and worry about getting home in time to squeeze a workout in. Being inside a museum disrupts the way you typically experience time. That’s part of what makes museums so special. The Campbell’s Soup Can is an instructive exception. Could there be a better spot from which to perceive the beauty of the ordinary and experience art in the age of mechanical reproduction than when you’re having a dipped cone at the DQ?

The educational origins of the exhibit make it a worthwhile one for Eastland to keep around, and the novelty of it invites curiosity. Could an exhibit like this serve as an alternative to traditional museums for towns like Eastland that lack the endowments of a city like Houston? What would it take? Those questions aside, it was a fun diversion for a visitor like me, and my quest to see as many of the reproductions as I could took me past some of the town’s real selling points: The marquee of the 1920 Majestic Theater, still showing movies. The 1918 Eastland Hotel. The eight-story Connellee Hotel and Civic Center. And the neon sign flashing E A S T L A N D four stories up as I pulled back onto the freeway. 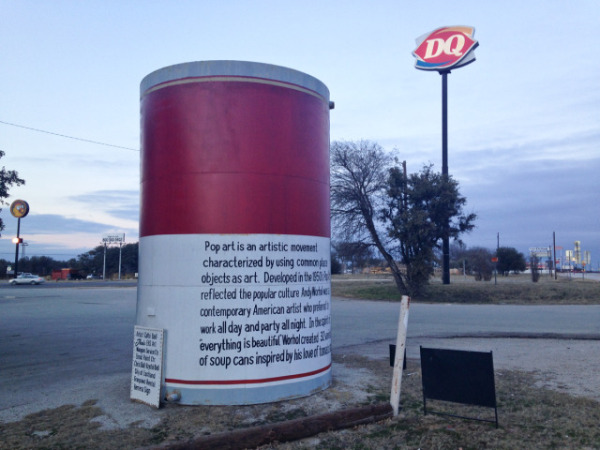 Eastland’s Outdoor Art Exhibit consists of 41 pieces. Maps are located at the Chamber of Commerce and at the Huge Campbell’s Soup Can next to Dairy Queen, on the Interstate Service Road.

This is great! We all would like to see a bit more attention paid to the unfamiliar!

What a powerful message it offers the residents there! I had no idea Jackson Pollock was an alcoholic and didn’t have a good personal life. Thanks for sharing this information.

Very creative! I was once offered a “pop up” show in Eastland. I wish I had taken it up.