In Defense of Online Comments

Recently, someone whose judgment I respect told me that the comments on Glasstire can—and should—be taken as a reflection of the site’s editorial ethos.

I was surprised and taken aback. My friend’s point was that, while we might not write the comments, we still allow them to be published on Glasstire, and thus we’re responsible for them.

Glasstire is hardly alone in struggling with comments, or at least the perception of comments. Much ink, and many millions of dollars, have been spilled in recent years in unsuccessful efforts to raise the tenor of online conversation among readers and protect sites from being hijacked by trolls. Popular Science threw in the towel and eliminated their comment section last year; and Gawker loudly released its Kinja “platform,” which was intended to “revolutionize comment systems,” but which has yet to foment much revolution.

What’s emerged in all the hand-wringing and pricey R&D are two ideas. The first is that no computer algorithm can (yet) weed out the trolls. You have to have a human being paying attention to the conversation to keep it civil. Fortunately at Glasstire, we have the capacity to moderate (i.e. read) every comment before it appears on the site, which has improved our comment section over the years. Our policy is to let critical comments through unless they’re personal (“______ is a slobbering drunk and their art looks like ass”), or downright libelous, like the time years ago when a commenter “satirically” claimed to have been molested as a child by a museum director. Those types of things don’t pass muster.*

It’s also worth noting that we don’t copyedit comments—what you type is what we publish. Once upon a time someone who (we suspected) had indulged in a few too many late-night tipples posted a rant bursting with typos and misspellings. A well-meaning Glasstire staffer took pity on this person and tidied up their work. After an internal discussion, we agreed on a new policy: no help is given to the grammatically challenged, and there are no edits or take-backs after! 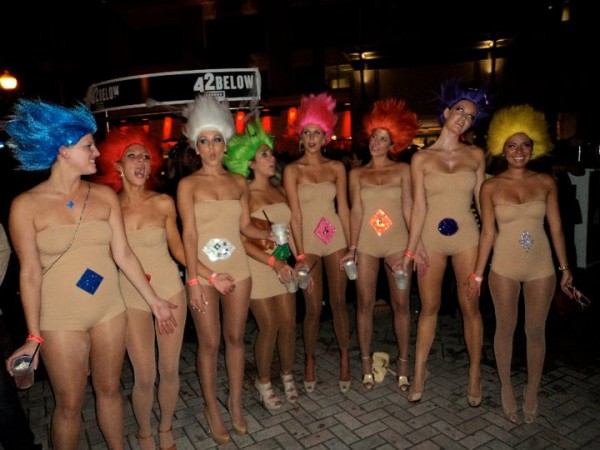 The second idea about comments is that there’s a problem of hierarchy: that having comment sections appear at the end of articles is somehow insulting to readers. Travis Nichols, a former blog moderator, is quoted in the New York Times as saying that, with comments at the bottom of the page “people feel that they’re not as legitimate a voice as the original post,” and that commenters have a grudge — and presumably come out swinging harder — because they feel they’ve been relegated to the “steerage class” of the conversation.

Personally, I think the notion of comments being problematic because of some kind of Upstairs Downstairs class warfare between writers and readers sounds a little too much like Everyone Gets a Trophy.

The truth is that the democratic promise of the Internet doesn’t quite fit with the reality of effective communication. The Internet is a powerful tool that has leveled the playing field of human discourse, right? All our voices are legitimate, about any topic, right? Well, no, actually. When Popular Science dropped their comment section, they spoke of a “war on expertise” eroding popular consensus on topics like evolution and global warming. What they were saying (without saying it), is that just because you passionately believe the Earth to be 6,000 years old doesn’t make your idea legitimate.

And likewise, just because you think you know something about art — well, you can see where I’m going with this.

Writing generally, and writing about art specifically, is a difficult business. Doing it well requires hours of work by multiple people. Many conversations, thinking, and a lot of wordsmithing go into a well-written article (to say nothing of a good education and a lifetime of reading and looking at art). It takes years to get to the point where you can come up with a good idea and express it elegantly, and it’s unreasonable to think that just anybody can do it.

Which means, not unkindly, that comments belong at the end of articles. They’re not the article itself, they’re a response to it. In the best cases, they’re like a great conversation over drinks: it’s interesting to consider smart, witty responses that disagree with the writer. And because they haven’t been suffered over (on the contrary), comments are often more fun, because they’re looser and less mannered than an edited article. They’re not stuffy letters to the editor; indeed, they’re usually where the real juice of a discussion is. Sure, commenters say stupid things sometimes. But they also say insightful things, and I enjoy many of the conversations that go on under the articles. I like seeing what readers think. And so, getting back to my initial point, perhaps it’s okay to consider that reader comments on Glasstire are a reflection of our editorial ethos, however much we may disagree with them.

What gets me to complaining is when I hear a smart, interesting person complain about our comments—followed reflexively by “and I would never post a comment myself.” If you want the conversation to be better, then you need to join in occasionally. Post a comment! The worst that will happen is someone will disagree with you. And if you feel like you’re getting shouted down by a troll, just email us at [email protected] and we’ll have a look and consider taking down the offender’s comment, or blocking them altogether.

And with that, I cede the floor.

* True, we’ve had different standards for Glasstire staff vs. freelance writers: we sometimes allow more negative comments if the author is a Glasstire staffer, the theory being that employees are more invested in the site and thus should be able to withstand the full force of reader opinion. Regardless, we always reserve the right to publish or not publish any user-submitted comment in full or part as we see fit.

I get off easy; I’ve just written simple obersvational pieces about large events for the most part. No troll bait there. 😛

It could be worse, we could allow images and have the bowels of IMGUR vomited all over the site. (Please never add that.)

I would agree that the article comes above the commentary, but only because it was published first, as Ms. Currie’s statements may be published above my own because she responded first. In my view, the thoughts and opinions of both the author and the respondents are of equal standing in terms of free expression and access, regardless of viewpoint, state of drunkeness, or educational level.

Further, Glasstire is a forum for public discourse and expression, and should not be held responsible for any rants which may offend. If a respondent chooses to engage in libelous or inappropriate behavior, then they alone bear the responsibility for their actions.

Yet, in the very last paragraph, in which you state that there is a different standard between Glasstire staff and everyone else, you seem to contradict your previous argument. Anyone who posts a comment is in one way or another invested in the free exchange of thoughts and ideas, and should be heard. Erecting any barrier to the contrary or opening up access to a select group runs the risk of appearing prejudicial.

Let the trolls come, they only humiliate themselves.

Anil Dash (one of my favorite thinkers on this topic) has a post which I think is a really great overview on best practices for sites with comments. Basically he outlines why the tone of comments on a website is the responsibility of the editors and what you can do about it.

Thank you Mark for sharing the link regarding best practices for on-line comments.

There was a This American Life episode about Bad Apples and can one person really ruin the group dynamics of the whole. Apparently he can.
1 be a general jerk …dismissing everyone’s opinion and aggressively attacking all points of view
2 the who gives a shit about this topic and you guys are wasting time
3 is changing the subject to your own personal crisis…pay attention to me I am miserable

We are totally effected by bad apples. In the study only one group managed to be effective in the midst of sabotage. This group had a member who was studying diplomacy. He managed to diffuse the negativity and keep the others on task.
Maybe that’s your role in the midst of a jerk online.

Thanks for posting. I moved to Houston this past year and glad I have found your site.

@Mark Allen: thanks for posting that link. I am admin of a community bulletin board (marfalist.org) and I’ve struggled with the fine line of blogging and the dialogue I believe is good for the community. I completely agree if your site is full of assholes, it’s your fault. Thanks again.

This is a wonderful article about classicist Mary Beard responding to trollers and engaging with those people. The instinctive reaction when one is attacked online is not to engage; she’s taken the opposite tack.