River of Gruel, Pile of Pigs: Notes from Fusebox

by Katie Geha May 4, 2013
FacebookTwitterEmail

The composer John Cage once said, “I really think it’s important to be in a situation, both in art and life, where you don’t understand what’s going on.” This small bit of wisdom quickly became my guiding principle throughout this year’s Fusebox Festival, an annual international celebration of performing arts held every spring in Austin. It’s an overflowing week-and-a-half of alternative performances, 3D video pieces, living art works, traditional theatrical productions, shop talks over waffles, carnies and a booty-bouncing music performance.

Fusebox isn’t for the passive observer; the audience must engage, interact, or must at least be willing (as Cage proclaimed) to exercise their “negative capability.” Take for instance River of Gruel, Pile of Pigs: The Requisite Gesture (s) of Narrow Approach. This production is a collaboration between a slew of Austin theater companies and the New York-based playwright Sibyl Kempson. It’s a “polydrama,” a fancy word I heard recently at a conference, meaning a play that doesn’t depend on a traditional storyline, but instead emphasizes the structure of the play and the movement of the audience through the performance. At the conference, the term was applied to Joshua Sobol’s Alma, a play that exists in a variety of spaces and offers several outcomes. In much the same way, River of Gruel turns the narrative tables on the audience, forcing them to participate in the construction of the play. 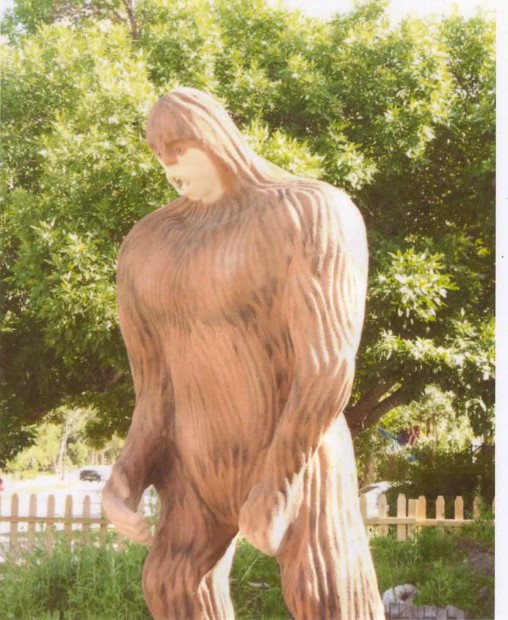 The small audience started out in the lawn of the Off Center, Rude Mechanical’s multi-arts warehouse space. We were herded together in a tight group, a rope wrapped loosely around us, then the two men and one child who did the roping ran quickly to the exit and sped off screeching in a car. Next we were lined up. It felt a little dangerous, like maybe being processed for a work camp. In line, I was approached by an actor,

“Sure,” I said hesitantly, realizing that a level of openness was required to engage this production. I was brought to a small curtained space and was briefly allowed to look at a set of miniature spaces: a cave, a science lab, a church. Later we would be led to each of these spaces writ large as the variety of sets in the production. But first, I saw “a Soother,” a soft-spoken man who gave me lavender and rubbed my hands, then I was interviewed by an officious woman, who asked if I was willing to let go of all of my memories. “Yes,” I answered. At another table, I was prompted to arrange a set of stones to replicate a recent dream. I gladly arranged the stones. It was my sheer willingness to go along that I found most exciting. I was gladly at their whim.

This initial engagement with the viewer’s participation felt risky, creating a bizarre sense of wonder. But the show quickly became too enamored with itself. Incoherently, we were led to a variety of sets where obscure dramas and comedies played out. There were songs, a kind of abominable snowman, a cave woman, a heroic steward of a ship, a puppet, a guy who for some unknown reason stripped down to his skivvies. The acting was just fine (I always love Hannah Kenah and Lana Lesley), but by the end all the puzzlement only added up to an inside joke. And the audience wasn’t in on it.

I’m generally fine with abstraction in theater but I like to get a sense of a mood, or at least I want some kind of precision via the costumes or the lighting cues or the language. There needs to be an underlying intent. It is precision and intent, after all, that make non-narrative works by playwrights like Sobol and Richard Foreman so thrilling. As it was, River of Gruel felt convoluted, cramming in too many themes and too many disparate styles. To be fair, the piece was being workshopped, which means after this production the playwright will make revisions. But as it is, River of Gruel was far too true to its title: confusingly gross. 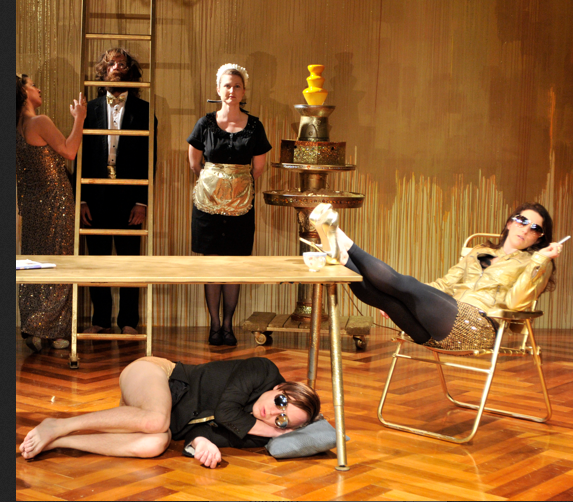 Another work that was also being workshopped and featured several of the same performers as River of Gruel was the Rude Mechanicals’ production Stop Hitting Yourself. This is a much more realized and traditional production, featuring a wealthy family of socialites inhabiting an elaborately gilded set surrounding a fountain of queso (yum!). The annual charity ball is coming up and the queen will pick the family member with the most worthy cause. One of the socialites has recently taken in “Wildman,” a hairy man raised in nature who wants the money to go to a natural cause. Competing for the prize is a conniving con man who will use the money for his own desires. Between vaudeville-like songs and dances, the actors ruminate on money, unearned fame and what it means to be a good person in today’s avaricious society.

At various times during the play, the actors break character and come to the lip of the stage, taking turns confessing their wasteful luxuries or needless desires: “I drive with the windows open and the air conditioner on,” one actor says. “I listen to NPR every day and have never donated to their fundraiser,” says another. It is an effective tool to invite the audience to ruminate on their own indulgences. To close each confession, an actor lists a favorite decadent food: bananas foster, crème brûlée, cheeseburgers, foie gras. The ending of the play is mushy. This is a not-uncommon problem with Rude Mechanicals productions: The conceptual framework gets murky, or the emphasis between the natural and the man-made world is not nuanced enough.

Regardless of their lack of rigor, the Rudes’ productions are always a fantastic party and Stop Hitting Yourself is no different. The self-taught tap dancing, chandelier-swinging numbers and stellar performances drowned out the other failures of the play in a delicious, gooey fountain of queso. With a few tweaks, Stop Hitting Yourself promises to be a terrific production that takes to task America’s late capitalist self-rewarding and degrading tendencies.

River of Gruel and Stop Hitting Yourself were presented as part of Austin’s Fusebox Festival, April 17-28, 2013.