by Sandra Zalman May 25, 2012
FacebookTwitterEmail 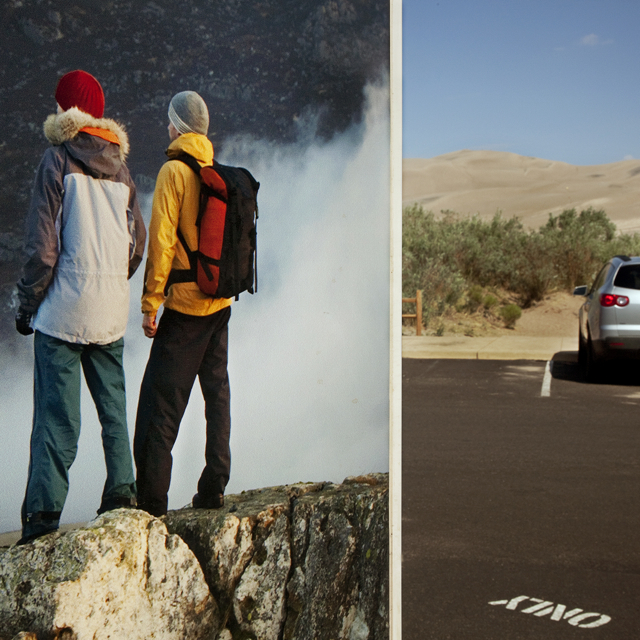 David Politzer’s new series When You’re Out There debuts in two parts this month at the Houston Center for Photography and Lawndale Art Center. In both shows, Politzer plays with the tension between two environments that are—as he quietly points out—awkwardly united. The works deftly mediate the gap between nature and the space it occupies in the cultural imagination —specifically, the American cultural imagination fed on a historical diet of Manifest Destiny, the National Park system, Route 66 and the open road. Perhaps the central premise of When You’re Out There is that there’s no “there” out there; the best you can hope for is a diagram indicating “You are Here.” Given the theme of displacement that permeates these works, it seems appropriate that the series is split between two venues (though this was a logistical consequence of Politzer receiving the Carol Crow Fellowship in the same year of his studio residency at Lawndale). 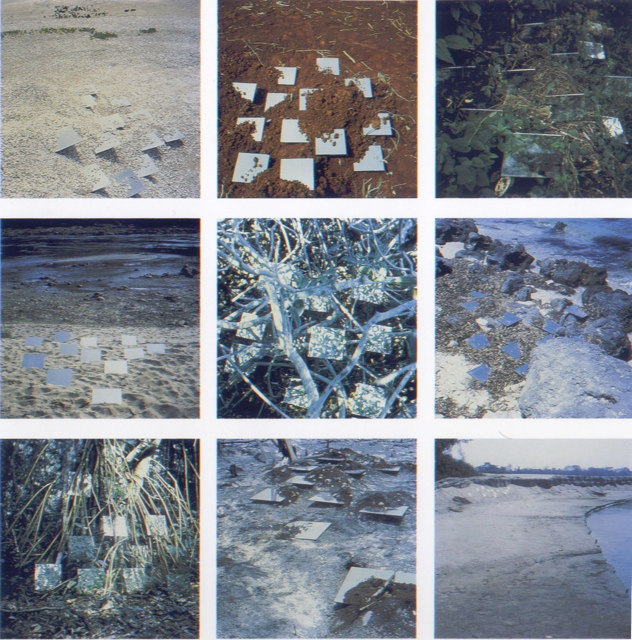 At HCP, Politzer exhibits nine square photographs hung at regular intervals in a small gallery. The installation matches the deadpan tone of many of the images. The photographs’ record of Politzer’s excursions into nature calls to mind Robert Smithson’s “Incidents of Mirror-Travel in the Yucatan,” a meandering sort of travelogue published in Artforum in September 1969 (about six months before the artist completed Spiral Jetty). The essay described Smithson’s Mirror Displacements, a series of nine images in which Smithson distributed nine mirrors in the landscape and generally photographed them from above.  The photographs ostensibly picture the Yucatan, but betray no trace of site specificity. Instead, the mirrors, which reflect the sky, act to compress the aerial and the terrestrial onto a single plane, playing with the distance between imagined and physical encounters with place. The final line in Smithson’s “Incidents of Mirror-Travel in the Yucatan” is an assertion of the impossibility of reconciling this dislocation—“Yucatan is elsewhere.” 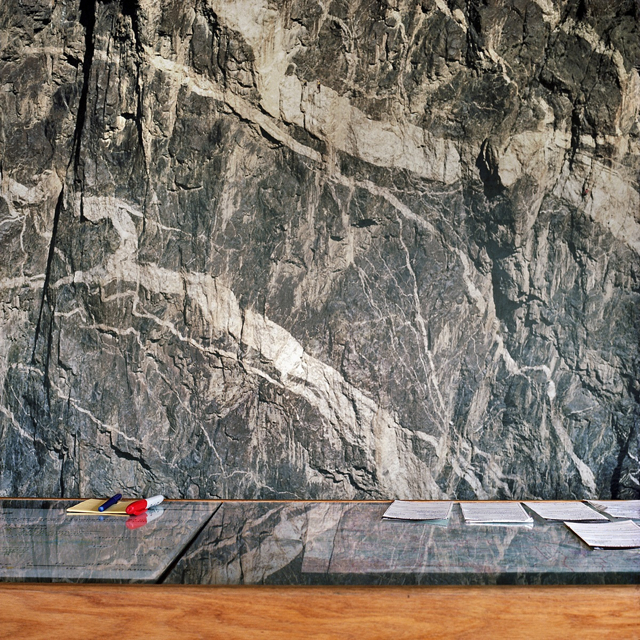 Politzer’s Ranger Station, Black Canyon of the Gunnison (2011) evokes a similar sense of disorientation within a quasi grid-like system. It is a photograph of a photograph of the canyon, and that representation is repeated in the reflection of a glass desk punctuated with neatly ordered handouts. The hazy impression of the canyon overlays the diagrammatic abstraction of it available as maps at the ranger station, where visitors are meant to get their bearings. Yet Politzer’s photograph only magnifies the distance between nature and its representation. Particularly successful is the interaction of the blue pen, red marker and yellow notepad on the lefthand side of the image, which could be read as an update to the formal purity of Mondrian as the objects’ geometric angles interact with the craggy lattice patterns of the canyon. There is a play with the inadequate tools of illustration used to copy nature, and their dynamic balance with the not-quite-naturalistic landscape. 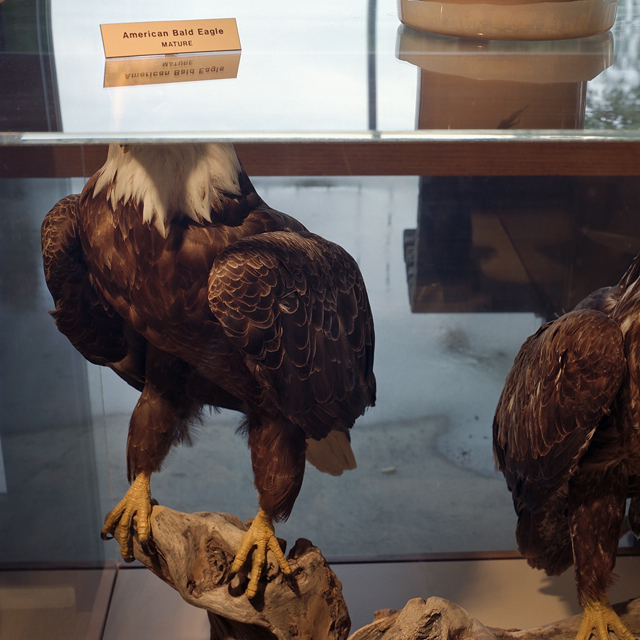 Like Smithson, Politzer deals with the mythology of landscape while giving only nominal indexes of the natural places he visits. The residue of representations of nature is layered in a complex perceptual game in many of these works—Politzer wants the viewer to feel that sense of dislocation even from the safety of the ranger station, the motel lobby, or the cafeteria buffet. Where Smithson denied the viewer a sense of situatedness by employing the aerial perspective to turn landscape into an abstracted grid, Politzer comments on our desire to inhabit the natural environment while inevitably remaining subject to our habitus.

In American Bald Eagle (2011), one of the more immediately arresting images, Poltizer captures a taxidermied bird in a glass case, shooting it at an angle that makes the bird appear beheaded. A modest sign reading “American Bald Eagle Mature” rests on the case, labeling the animal turned national symbol, here turned inanimate specimen. The photograph functions, as many of Politzer’s images do, on the build-up of framing devices and the surreal reflections of the case, which mirrors the text of the sign, replacing a semiotic fragment for the thing itself.

As part of Prospectors, the exhibition that showcases the Lawndale Studio Artists (including the strong work of Seth Mittag and Anne J. Regan), Politzer exhibits photographs and video works in a more dynamic installation. Three custom-made screens hang overhead, displaying projections of hyper-idealized picturesque images entitled Harsh, Rugged, Barren; Biggest, Tallest, Highest; and Sublime, Heavenly, Inspiring. The placement of the screens above the viewer already marks them as reverential images, and their oblong shapes, as an artist friend suggested to me, are reminiscent of cathedral windows. As projections, they’re also filtered in the diffuse way one might see light through stained glass. Yet in the context of the exhibition, the superlatives of the titles and the images’ digital optimization speak to a desire to aestheticize the natural, to colonize it in some way. 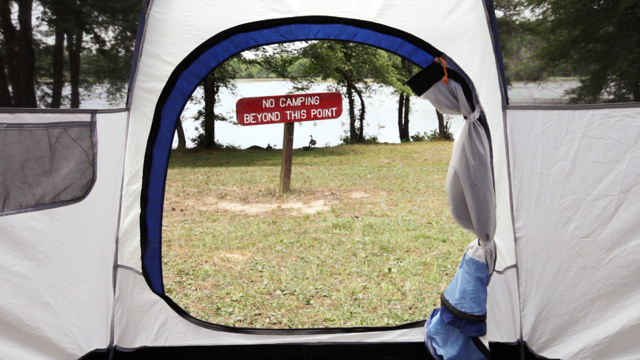 In the single-channel video Restless (2012), we see another comment on the lens of artifice, as Politzer situates the viewer in a tent through which we see fields, plains, meadows, rivers and sand dunes beyond. At first the footage is remarkably scenic, then we are introduced to other, man-made realities of camping—port-o-potties, chain-link fences and signs that read “No Camping Beyond this Point.” The tent acts as trope for our mediated experience of nature, as the viewer is stuck in the liminal place between indoors and outdoors, bounded by the frame’s edge and tent flap. This compression is agitating, but instead of the anticipated release of entering through the open portal to the great outdoors, the camera/tent retreats from the setting in a strange inverse of our expected eagerness to engage with nature.

As a whole, When You’re Out There offers up a simulacrum of nature, riffing on the traditions of landscape photography and presenting that peculiar space between fact and facsimile. Perhaps the most intriguing aspect of the works is that for all the sly undertones, they still portray nature as a Sublime, Heavenly, Inspiring place.

David Politzer: When You’re Out There
Houston Center for Photography
May 4 – June 23, 2012

Sandra Zalman is Assistant Professor of Art History at the University of Houston. She was recently awarded a fellowship from the American Council of Learned Societies (ACLS).