Fertile (art) ground: What happens next on the other side of The Bridge? 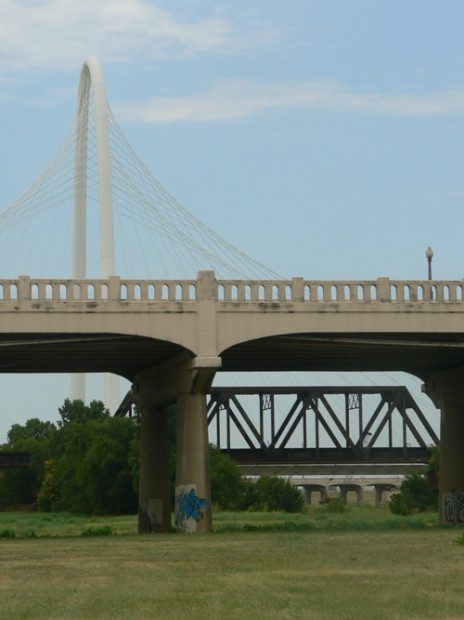 For half of my life I’ve lived in Oak Cliff — a now hip and cool, but once bad-repped and socially misunderstood place that I’ve long prized for its rogue-ish solitude south of the Trinity. One of my favorite memories from living here is when, back in ’97,  a gussied-up blonde girl came into a 7- Eleven where I was buying gas and asked the clerk where she was — she’d taken a wrong turn downtown and gone across a bridge. “Ma’am, you’re in Oak Cliff,” he said, expecting to shock her. And shock her he did. She fled from the place,  I suppose terrified about all the nefarious outcomes that could befall her in a neighborhood that was considered a war-zone of sorts by other, more peaceably– programmed parts of the city. Since then, I’ve seen the neighborhood change, not from a bad thing into a good thing, or even from one thing into another. Rather,  this place is just  reaching its potential, and, in many ways, returning to a former version of itself  — a small, engaged and creatively thriving community. Because of that, the rest of the city has taken notice. It’s no longer “slumming-it” to come across the river and set foot here like it was less than a decade ago.

Add to all of Oak Cliff’s notoriety the fact that Calatrava’s new bridge now looms over it, and will eventually deposit people from the north of the city into the southwest of the city via its taunt white straps, and suddenly you’re looking at a hotbed of potential. Potential what, exactly, right? In the years since its conception the bridge has been called the Bridge to Nowhere, due to the fact that it shoots people into a rather blighted, formerly (and currently) industrial little throughway with almost no sign of street life.

But the life is there. A number of artists, photographers and craftsmen live and work in the warehouse buildings surrounding the Calatrava’s spillway, if you will, and the potential for more to come in and inject the area with vitality from the ground up is huge. The city approved a plan last March that seeks to ensure that the development of the area stay micro, preserving an old Hispanic neighborhood nearby, and encouraging slow, new growth alongside parts with already deep roots. Michael Ennis wrote a piece about this area near the bridge for this August’s Texas Monthly and focused primarily on the city’s vision for shaping it. While the city’s plan is forward-thinking and progressive, especially for Dallas, Ennis states, it certainly can’t do everything for that area. From the piece:

For all its practical virtues, the West Dallas plan… addresses the city beautiful in a…  iconoclastic way. Dallas has always taken a trickle-down approach to culture, dropping the arts in big, pretty boxes from the sky while doing little to encourage the artists struggling in its midst. That ignores the example of, say, New York, which became the cultural capital of the world not by building a Lincoln Center in the thirties but by housing artists like Robert Rauschenberg, from places like Port Arthur, who flocked to its cheap, crummy downtown lofts in the forties and fifties; New York’s SoHo wouldn’t be seeing today’s sky-high real estate values if artists hadn’t started moving into its abandoned factories in the sixties and seventies. The guidelines take this same trickle-up approach, designating artist’s studios and artisan’s shops as important economic incubators.

The best way for the area in the shadow of the bridge to grow and thrive is, in part, to keep incubating the arts there in the quiet way it has for decades in the private homes and studios scattered around, but it also needs new art folk, craft folk and intelligent-folk to add their talents to it now to ensure that the best kind of seeds are sown there. And as a place full of old warehouses, small storefronts and vast empty lots begging for community, the fruit  of West Dallas seems ripe for the picking.