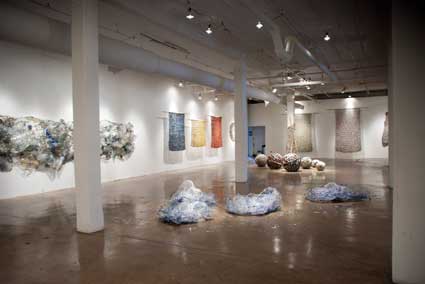 A native of St. Louis who teaches at Washington University, Joan Hall is an avid sailor who is often dismayed to see plastic trash floating miles from the ocean shore.  She notes that 10 percent of all plastic winds up in the oceans, resulting in monstrosities such as the Great Pacific Garbage Patch, estimated to be three times the size of Texas.

She laments the decline of ocean life in her wall-mounted sculptures, which resemble fishing nets bulging with manmade debris. Made out of Japanese-style handmade paper, her fishing nets are designed to evoke her feelings of being damaged, trapped and insignificant.

“But I’m basically an optimist,” she says. “I try to make something beautiful and with a message. When you’re out on the ocean and can’t see any land, it makes you realize how small you are. Then to see a piece of plastic floating by reminds you that the quality of ocean life is being threatened on a global scale.”

Paper, hers handmade and his recycled, links her work to the Italian artist Ivano Vitali, who weaves and knits fantastic creations out of newspaper, in “Crossovers: Materials and Metaphors” on view through Feb. 12 at the Blue Star Contemporary Art Center.

Using digital technology, Hall prints the image of the fishing nets on large sheets of paper and then cuts them out using a scalpel.

“I like the way paper feels, and you can do almost anything with it,” Hall says. “But this is a labor-intensive process. I spend a lot of time watching movies and listening to books on tape while I’m cutting out the nets.”

She laminates the nets with Mylar for a translucent effect. Push pins with sailor knot decorations are used to secure the nets to the wall. 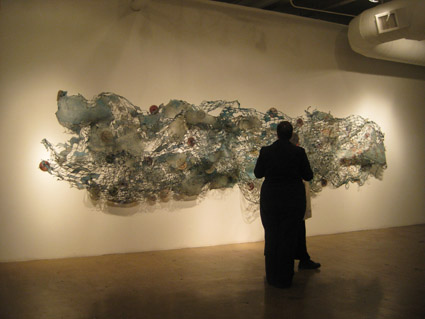 Plate-size images of cancer cells and microscopic coral life forms appear to be caught in one net, though the abnormal cells and merely endangered are mixed together so it’s hard to tell them apart. The largest net, stretching more than 20-feet across, appears stuffed with sun-bleached shopping bags.

She also uses flotsam collected from a Florida beach, primarily commercial plastic fishing nets, in a haunting floor installation, “Here No More.” Contrasting the rich blues of the oceans with the stark white of manmade plastic, Hall’s sculptures are pleasing to the eye but disturbing to the spirit. 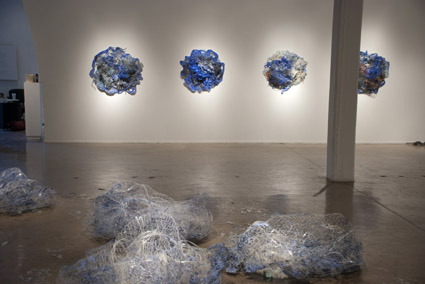 Here No More in foreground

Rooted in Arte Povera, Vitali uses handmade yarn that he makes from recycled newspapers. Since 2005, he’s been using giant wooden knitting needles to create large-scale works to hang on the wall, including a giant sock and mitten for his show at the Blue Star. Also on view are large, rectangular tapestries and giant balls.

Curator Meredith Dean said that while Vitali’s work represents a completely different aesthetic than Hall’s, they share concerns about the environment. And both find their labor-intensive processes meditative. Vitali showed off a colorful basketball-size sphere that he made on his plane trip using Italian Mickey Mouse comics.

Since Italian newspapers are printed on different colors of newsprint, such as blue, gold and red, Vitali’s work has a much more diverse palette than you would expect if he were using American newspapers. Also as the newspaper constructions age, they tend to yellow and change over time, developing a much warmer look. He may collect newspapers for two of three years before making one of his large-scale sculptures, and the papers usually have some conceptual connection to the types of pieces he makes. His mother taught him to knit, and in Italy, his work is considered transgressive because he is a man doing traditionally woman’s work. Vitali, though, is primarily concerned about the trees used to make newsprint, and using the recycled newspapers to make something beautiful.

Both Dean and her husband, Dennis Olsen, teach at UTSA, but during the summers they run the Santa Reparata International School of Art in Florence, Italy. That’s where they met Vitali, who has a studio nearby. One of Hall’s students was Bill FitzGibbons, executive director of the Blue Star. 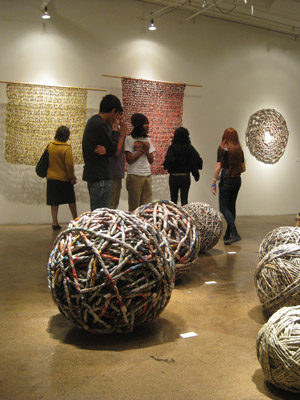