One Kind Favor 1 (East of Eden)

This is day one of One Kind Favor, a trip I’m taking around the state and into New Mexico, reversing the route taken by Jens Hoffmann, Director of the CCA Wattis Institute in San Francisco and curator of On The Road , an exhibition that took place last summer in the Hudson (Show)Room at Artpace in San Antonio. He took the trip to “investigate the mythology of the American motoring adventure", acquiring objects along the way that combine to form a commentary re his regional expectations and the way these memes are discovered/reinforced by those expectations. I was taken by the obtuse humor of the show and proposed to Artpace Director, Matthew Drutt, that I drive Hoffmann’s route in the opposite direction, putting things back as it were, and in the act creating an alternate narrative to the one found/created by Hoffmann. He drove from San Antonio to Las Cruces, New Mexico, crossed back into Texas on Route 66, then over to Amarillo on I-40, down through Lubbock, Ft. Worth, Big Spring(s) and back to SA. 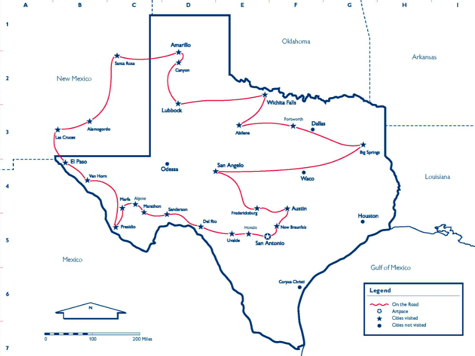 To follow his journey, now become mine, you’ll need a list, happily provided by Artpace, of the objects he found on his way.
Each piece is accompanied by a blue tag with text by Hoffmann.

Five of the last six things on the list are not with me, as they were returned to the curator per his request. And a sixth was lost. Six things I have to somehow replace, entering them into my story from the backside. The book was something he brought with him from California for on-the-road reading and as for the ring, well just read on. I’ve elected to send him a postcard to compensate for the one from Ft. Worth; and Ken Little a couple of years ago gave me a Stetson that I can’t quite wear, so along it comes. I’ll have to bring my own book and will still need to replace the Will Rogers item, the shot glass and the ring as I go. Also, just so you’ll know along with me, some of the things are designated as being from specific places, while others are not.

I headed out this Monday morning toward San Angelo via New Braunfels, Austin and Fredericksburg. The first leg, San Antonio to Austin, takes me on just a small section of I-35, considering it connects Laredo, Texas to Duluth, Minnesota, running like a river across the Great Plains. BTW, the book I brought along for the journey is Mark Twain ’s Life On The Mississippi. Rumor has it that it is the first book ever presented typewritten to a publisher. Good parallel to Kerouac’s On The Road, originally typed they say, on one long page; and the book that was the jumping off point for Hoffmann. The Twain book is also a meaningful counterpoint to America Day By Day.

On my mind is the “strange ring” that Hoffmann acquired in a pawnshop somewhere on the route. He’d gone in to the shop to see if he could buy a gun, was refused, and then drove on with another purchase, the ring. Shaped like Texas, it probably served as a talisman of sorts for the Texana that was his hanker. You see the ring was lost before it ever got to the show — the only trace of it is a single photo in the good looking road-map style catalog produced by Artpace for the project.

So it’s the loss that’s on my mind. My task is to find a way to replace the missing talisman with something of equal power, and then once I have it, figure out what to do with it. Enchanted Rock, just outside Fredericksburg, pulls me. 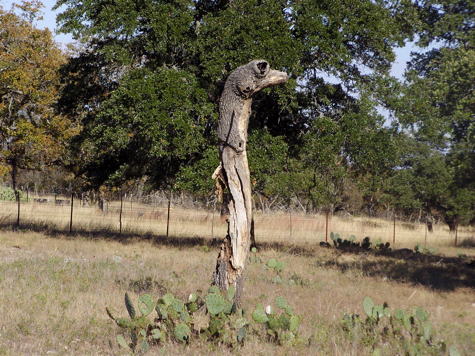 Between Fredericksburg and Enchanted Rock

But now I’m headed north on I-35 for the brazillionth time in my life, and as I’ve just hinted, I’m thinking about George W. Bush. I’m carrying the Stop sign and I’m figuring I’ll try and find Ws frat house from his wannabe UT days and see if I can pawn it off on a current fraternity brother for some gas money. I wonder if frat rats still steal street signs and hang them on their walls? Don’t know. Come to think of it, I’ve only seen frat house rooms in movies. Anyway, by the time I get to New Braunfels, musing whether Mr. Hoffmann made it to Schlitterbaun, I’ve already ditched the idea. Austin has entirely too many entitlement issues already, so I decide to blow off weird and go lame.

So I just head west out of Austin on 290 toward Fredericksburg. And, as luck would have it, right away when I hit town I find what I’m looking for in a second hand shop. A gorgeous rusty key, about six inches long with the heft for a lock from the other side of the last century. They even have two of them, one the duplicate of the other. I forgo getting the second one, preferring to stay tight to the concept. Besides, they’re nine bucks apiece. But this key is the thing. And I’m taking it to a place they say is enchanted. The talismanic possibilities overwhelm me — I have to drop the key as it has begun to glow.

The first time I visited Enchanted Rock was in 1977 right after I moved to Austin from Lawrence, Kansas. Back then it wasn’t a state park. You could just drive right up to it and even camp with a fire on top if you were willing to brave the wind. These days it’s well maintained by the state of Texas and you have to stop at a checkpoint to go in before choosing a designated campsite. Inside the Headquarters, in a vitrine, a bit like those which displayed Hoffmann’s finds in On The Road, I discover the Historical Marker that used to be up on the rock. It’s about John “Jack” Hays, legendary Texas Ranger, and tells how he fought off  Comanches from atop the rock (he was also known as “Devil” Jack Hays). I have a short conversation with the park ranger about how they had to move it inside because people kept trying to steal it. Not surprising, considering human nature, but then I’m taken back to a fairy tale, the one about the woodcutter who loses his rusty axe in a lake and is offered, from below the surface, copper, silver and gold versions which he turns down, only to be rewarded with all three when he honestly identifies the dinged up one that Hermes, that old trickster, brings up last.

And I’ve got a rusty key.

I put some water in a bottle and head out to climb Enchanted Rock. Actually, it’s an easy walk. And as it turns out, the power of the key, the power it got from the lost ring, is with me and takes me right where I need to go. Not far up at all I find it. Someone’s idea of a bench made out of a few chunks of granite, but to me it says nothing but shrine. I place the key in the inner sanctum and keep walking. I wonder how many honest woodcutters will pass that key in the coming hours and days, leaving it where it lies…

A ways up I encounter someone. He’s standing still, fifty yards up, has a walking stick and floppy hat, and he’s got a funny contrapposto to his posture, like a scarecrow pointing the way. He looks at me for a long time. Eventually we get within earshot of each other and he announces, I think to me, I was looking for Jack Hays. Jack Hays? I intone as if to say, who’s that? Oh, you’re not from Texas, he answers. You mean the guy that killed Comanches here? I say, remembering the plaque that I only just read. Oh, you are from Texas, he impunes, losing interest in me and passing by.

Later on, when I’m heading back down. I hear him. I was looking for Jack Hays I hear him say. This time he’s not talking to me and is actually a good distance away. Sound carries well out here. He’s talking to two hikers, a man and a woman, who are approaching the rock with their two dogs. Jack Hays? the couple queries. You’re not from Texas are you… 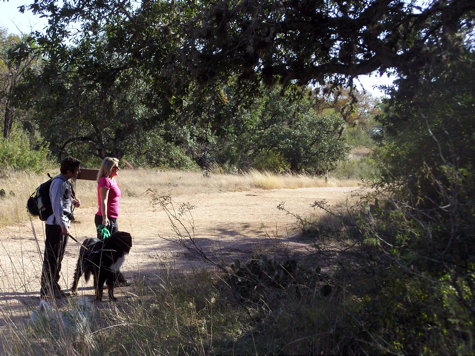 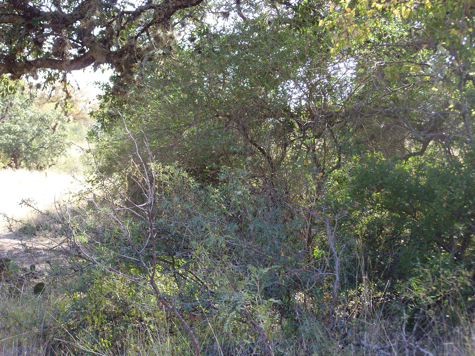 Really, he's back there

I listen for a while, but it’s a long story. As I pass by he’s to the part where Hays buys all these guns from Samuel Colt who cries when he gets the order because he’s almost out of business. So Jack Hays subsidized the six-shooter and changed the way the west was won. By the time I’m writing this, I’ve recalled a good read from last May, Empire of The Summer Moon, by S.C. Gwynne — Jack, or Devil, a choice you must make if you employ the binary option, is in it for about thirty-five pages. 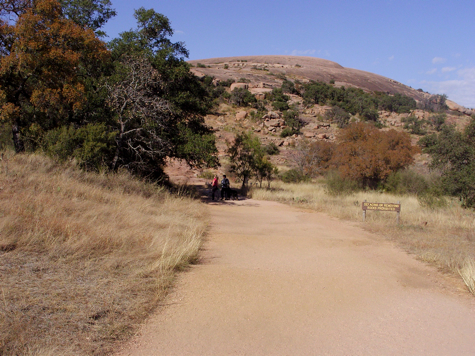 I’m down the road now, happily on U.S. 87, a stretch of highway that is always interesting. It passes pretty close to Menard, named for that Pierre that Jorge Luis Borges made famous for rewriting The Quijote, goes right through Eden (I’m a little east of there now) and then offers a turn off to El Dorado a few miles further down the road. Fantastic, emblematic, talismanic, even, as Duchamp, I mean Snagglepuss used to say. So by the time I pull in to San Angelo, all this exotic stuff has got me in a European mood and I almost elect to stay at Knight’s Inn, but, just in the nick of time, snap back to concept and choose the regionally excellent, Inn of The Conchos. I pull in after dark and flip on the tube just in time to hear Hank Williams Jr. sing the Monday Night Football song. I wonder if it was Jerry Jones idea to put the words “work of art” in this year’s version? 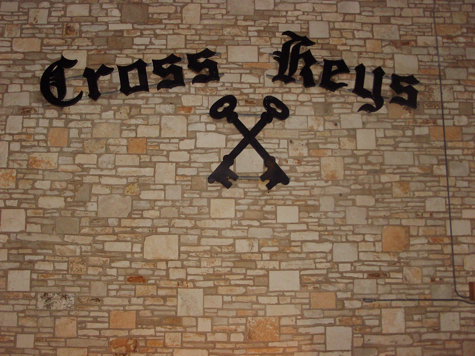 Retiring now with my book, I’m thinking a bit about tomorrow. About the license plate that Hoffmann says he found on the road near “Big Springs” as indicated on the identification tag attached to the plate. I’m guessing he meant Big Spring, less than two hours west on 87. Big Springs is in east Texas, and a weird route for Hoffmann to have chosen to get from Ft. Worth to San Angelo, taking him hundreds of miles out of the way. But that’s what the catalog shows, even if it is a map made to be misread. I consider my options, time and distance, and settle on the notion of using the plate for a different sort of license, the kind that let’s me choose my own poetry, wedged in neatly as it is between my misreading and his. Besides, I’ve got this Stetson and the reason to drive east that goes with it. 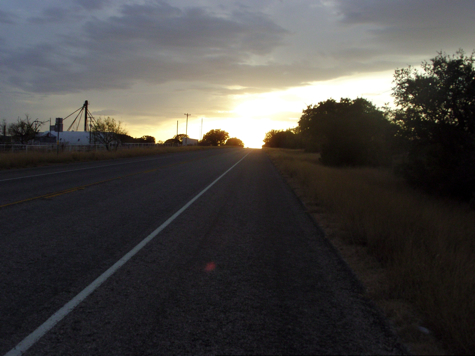 Thank you for sharing ,I found this article helpful .I like you article.Bless You!!
New Era Hats