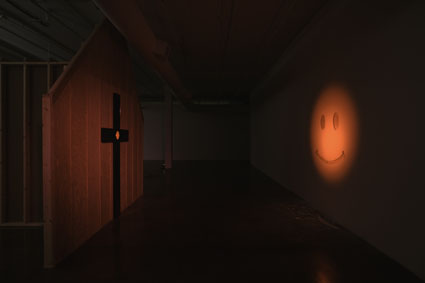 Mostly an armchair explorer of the human psyche, Hills Snyder journeyed to Peru in 2006 to visit the ancient temple of Chavin de Huantar, experiencing first-hand the Ayahuasca ceremonies of the Shipibo Indians of Amazonia.

“I’ve participated in ceremonies where I felt like I was bathed in this light of divine caring,” Snyder says. “But I’m not preaching anything, or giving any answers. This work is an extension of my on-going concern for a sort of spiritual search. And the emblem of the concern is the submarine, the idea of going down below life, death and birth to find something more universal.”

The submarine, a little reminiscent of the famous Beatles vessel, is painted on the entrance to his installation, “Casual Observer,” on view through Nov. 6 at the Blue Star Contemporary Art Center. Reflecting Snyder’s dry, West Texas sense of humor, the entrance is a screen door. 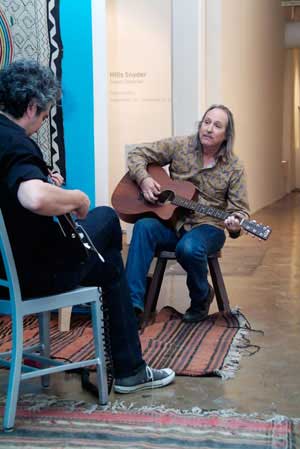 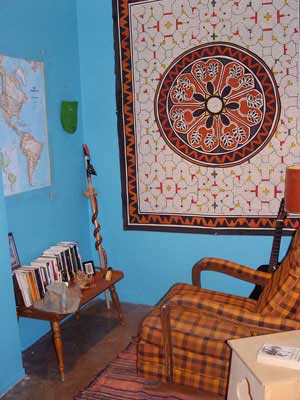 The Living Room at Blue Star

In the comfy nook that serves as the launching pad for Snyder’s cerebral flight of imagination, an old, upholstered armchair is surrounded by the tools of the intellectual adventurer – a well-stocked bookcase, a map of South America, an intricately geometric Shipibo textile and a Shacapa, the leaf rattle bundle that drives the shamanic power song known as the icaro.

“The designs of the textiles just seem to be something to float around in,” Snyder says. “They look like mazes and can be read like passages.” The designs also decorate the sides of the submarine. 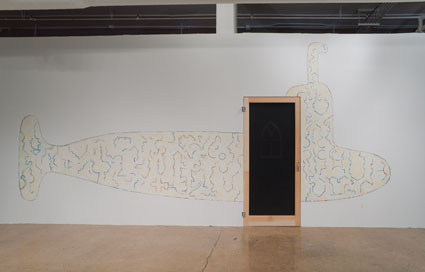 Through the submarine’s screen door, you enter a dark passage with the sounds of an icaro playing in the background. Snyder used a similar darkened corridor in “Book of the Dead” at Artpace in 2005. After fumbling around in the winding pitch-black passage, you emerged into a comfy living room reminiscent of the bedroom parlor at the end of “2001.” In “Casual Observer,” the straight, dark hallway leads to the glowing image of a fluorescent American Gothic window, a talisman from the painting by Grant Wood. 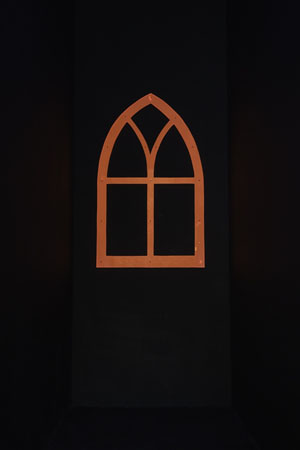 But you have to exit the hallway and walk around to the back of the installation to get the full impact of this stage set for transformation. A purple cross lights up the back of the miniature farmhouse, shining out a red light that projects on the back of the gallery a beaming smiley face.

According to Ben Judson’s essay in the exhibit’s brochure, Sndyer during his visits to Chavin de Huantor had significant encounters with the ancient Lanzon stela, a carved, subterranean pillar, nicknamed “The Smiling God.”  While Snyder’s “Casual Observer” might see the smiley face as a symbol of joy, more cynical types might consider it a symbol of the unlikely promises religions make about the afterlife in order to attract hopeful followers in the here and now. 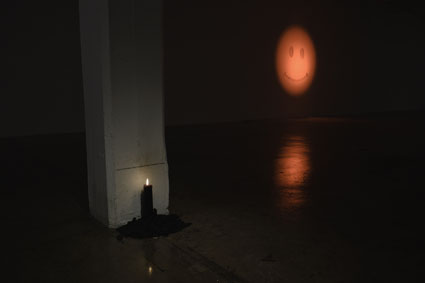 Snyder’s skepticism becomes more apparent as you walk around the installation. Beside one of the Blue Star’s columns is a lit candle, illuminating the message, “I Talk to Myself, But I Know There’s Nobody There.” And on the front wall of the gallery is written the tag line for an old joke, “And on the eighth day, God said, here, you do it.”

Snyder worked in the open gallery to construct his installation, so people could see him doing it. He also invited some musician friends to perform with him in the “living room” that’s part of his show. Joe Reyes stopped by three times, and Jeremiah Teutsch and Ken Little have performed twice. Next up is a song swap on the show’s last day, 2 p.m. Saturday, Nov. 6, with Matthew Rose. “Casual Observer” is part of a continuum of projects that Snyder says were inspired by a song he wrote in 1997, “Murder Ballad Song 44.”

“Books of the Dead” may have been the most ambitious, though Snyder’s most unnerving related project might be as the chalk grinder at Artpace’s annual “Chalk It Up Festival,” where local artists are invited to cover the sidewalks of downtown Houston street with masterpieces in chalk.

Snyder’s practice has been to dress up in 19th-century top hat and black suit so he looks like a character out of Dickens, or maybe one of the grave robbers in “Flesh and the Fiends.” An old-fashioned vision of Death, he infuriates passersby by not talking; instead concentrating on his task of grinding up hundreds of pieces of chalk into dust with a sausage grinder.

“It makes people mad because they can’t figure out why I’m doing it,” Snyder says. “Most people see it as wasting something that can be better used. To me, it’s about the mystery of transformation, but I like listening to people’s reactions. And I get everything from ‘He’s crazy’ to ambivalent shrugs. I’m trying to get people to step back from the culture and unplug, to peel away all the layers of personality.”

All photos courtesy of the artist. 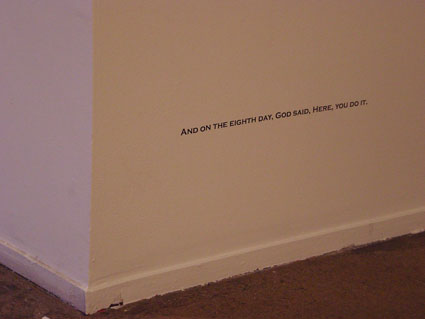 The title of the project is not limited to Casual Observer. It could just as easily be taken as Causal Observer. The ceremonies I participated in at Chavin in 2006 and 2009 did not involve ayahuasca. I did indeed characterize the feelings I felt in the presence Enrique and Wilma — the Shipibo ayahuasqueros I met in the jungle in 2008 — as divine caring, but the rest of that paragraph comes from Dan’s armchair, not mine. I’m sure he is paraphrasing what he thought I said about submerging. America, the entire continent, is pictured in the map — one of many details overlooked in this quick read. The title of the song Dan mentions is actually Song 44. True enough, it has been referred to as a murder ballad.