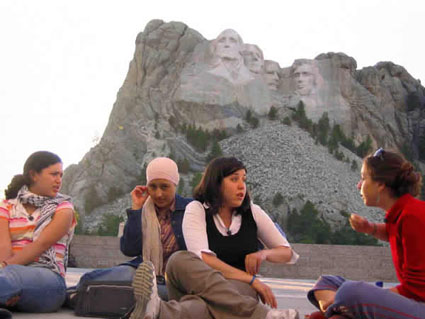 Debra Sugerman is the creator and former co-director of the Creativity for Peace Camp, which brings together teenage girls from Israel and Palestine in an attempt to break down barriers and establish a foundation for coexistence.

In “Dear Mr. President,” an acclaimed documentary she directed in 2006, Sugerman and five of the teenage girls from the Peace Camp (two Israelis, two Palestinians and a Druze) travel across the United States. Riding in an RV from Los Angeles to Washington D.C., they stop along the way to visit a Holocaust survivor, meet with Arab and Israeli immigrants in Dearborn, Michigan, and to visit Mount Rushmore, where the girls have a heated discussion about the Israeli army.

Despite their cultural differences, the girls could be sisters and they attempt to meet with President George W. Bush (who can’t because of “scheduling conflicts”) to discuss how the U.S. can help in the Middle East peace process. As one of the 16-year-old girls says, “It is pretty obvious that violence is not working.”

Sadly, Sugerman is currently working on an epilogue, “Broken,” a reaction to the death of one of the girls, Bessan Abuelaish (who wears a head scarf in the photo), the daughter of a well-known Palestinian doctor and peace advocate, who was killed by Israeli tank fire in her home in the north of Gaza on Jan. 16, 2009.

“It’s not like my eyes were closed to Gaza before; it is more like they are stuck open now,” Sugerman says on her Web site for Liquid Sugar Films. “I cannot turn my head away and do nothing. In fact, I am inspired to do more, to shine a light into this dark, ugly thing.”

A native of San Antonio, she got away from the “sleepy little town” as fast as she could but has returned to live here, “much to the chagrin of many, including herself.” Recently, Sugerman had a show of her photographs at the One9Zero Gallery in San Antonio.


“After a six-year break in exhibiting, I have returned with images that are about transitory moments in life, both recent and further back in the past,” she said in her artist’s statement. “Like the rest of the world, my own life has had many transitory moments. This year has proven to be a veritable roller coaster, with the only constant being change: one transition after another.”

With a BA from the University of Texas at Austin and an MFA in visual arts from Vermont College, she works in the feature film industry and as a freelance photographic artist. Primarily working in the art department as a set decorator and prop person along with other titles, her credits include feature films such as “Boys Don’t Cry,” “Igby Goes Down,” “Election,” “Kate and Leopold” and “Eve’s Bayou.” 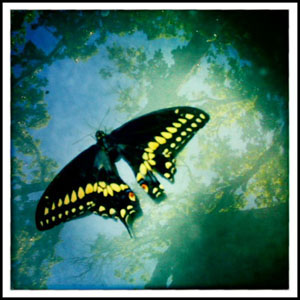 Almost like a visual journal of her emotions, Sugerman’s romantic, lyrical, low-light photographs were taken with her iPhone using various apps. A yellow butterfly floating on water reflecting lacy leaves and a blue sky is “Impermanence.” “Before” is an ocean beach at twilight saturated in blue. The blazing orb of the sun through clouds “Transitory,” the towering arc of a high bridge against a yellow sky is “Risk” and gulls on the beach are “Recovering.” Sugerman began taking photographs with a plastic-bodied Diana camera, and she likes that her iPhone can make images with a similar low-tech feel.

“I started out as a painter but gave up in graduate school after being ‘tortured by teacher,’ ” she says. “These images are about moving in and out of transition, passage, environment, beauty and memory, love, sorrow and impermanence. They reflect the transitory nature of all things and places.” 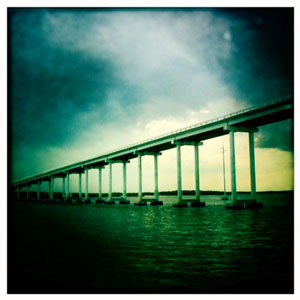 Her large-scale black-and-white images often have a feeling of aching emptiness. “Los Angeles” is a stoic line of soldierlike silhouetted fir trees. The “Pool” on a decaying estate is empty. A brooding stone lion is “Guardian” of what? Stairs disappear into nothingness, apparently leading into a Florida lagoon, in “Balustrade.” Abstract clouds and waves tumble together in “Next.” While the human presence is felt in Sugerman’s images, the figures are missing, creating a soul-searching void. 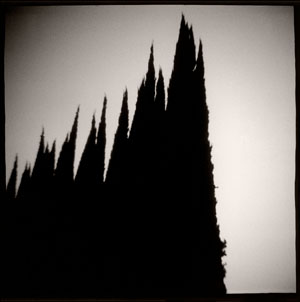 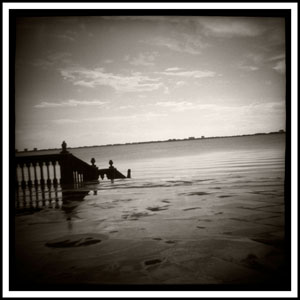