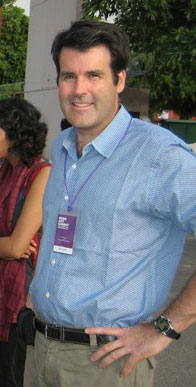 Today the Houston art world is a-twitter with the announcement that Toby Kamps, Senior Curator at the Contemporary Arts Museum Houston, will be taking over the post of Curator of Modern and Contemporary Art at none other than the Menil Collection, just up the street. Kamps takes over for Franklin Sirmans, who left the Menil for LACMA in January.

Says Kamps of the move: “I love the CAMH and its great staff and supporters, but this is a dream job. The opportunity to work with the Menil’s amazing collection is a once-in-a-lifetime opportunity. I can’t think of a better context for exciting exhibitions of modern and contemporary art.”

He will finish up the two projects he is currently working on at CAMH: a Kirsten Pieroth Perspectives show, to open in September, and “Answers to Questions: John Wood & Paul Harrison,” to open in February 2011. Asked about his plans for shows at the Menil, he said he and director Josef Helfenstein are currently mulling over ideas, and plan to open a show there “ASAP.”

Kamps is known for his somewhat quirky vision and unusually strong engagement with the Houston art scene. His two major shows at the CAMH were “The Old, Weird America,” which examined folk art’s influence on contemporary art; and “No Zoning,” a show of Houston artists who have worked outside of the traditional art market. He’s known for getting out and seeing local shows, and even attending art openings from time to time, which many curators do not do. He also likes living in Houston, and doesn’t pose the risk of fleeing at the first opportunity for a seemingly sexier city, as Sirmans did after his brief tenure at the Menil.

The news of Kamps’ move was a well-kept secret, surprising nearly everyone in town this morning when a press release went out from the Menil Collection. Even CAMH director Bill Arning only received word hours before the announcement (indeed, Arning commented on Helfenstein’s extraordinary poker face–apparently in a recent meeting, the Menil director, a Swiss native, gave no indication of the impending “friendly art heist,” as the Menil’s Twitter feed described it today). Arning is taking the news in stride, emphasizing the opportunity he now has to shape the curatorial department at the CAMH. He commented, “When my colleagues at the Menil asked me months ago what type of candidate they should be looking for to replace Franklin Sirmans, I told them they needed to find a curatorial rock star who was also likeable, approachable and engaged. They have found that man and congratulations to the Menil director Josef Helfenstein on a great choice.”

A former curator himself at MIT, Arning demurred when asked if he might try to fill in as curator while the CAMH organizes a search for somebody new. His role as director precludes spending much time on curating, though he is working on a Perspectives show at the CAMH for 2011, in conjunction with MIT. Looking ahead, Arning says he hopes that Kamps’ move will enable more cross-city collaborations. “Our deep ties to the Menil, MFAH and Blaffer will be strengthened by this cross-fertilization,” he commented.