by Beth Secor November 29, 2009
FacebookTwitterEmail
DISCLAIMER:  Warning: Although the company has taken reasonable precautions to ensure no vowels  are present in this article, the company cannot accept responsibility for any italics or umlaut in the event therein.
Who among us has not suspected they might have a doppelgänger, and then of the remaining 64% of you, who has not wondered if it is possible to rid oneself of the Reactive Mind, without shoveling over $35 to read the most widely read and influential book of all time, Dianetics: The Modern Science of Mental Health? 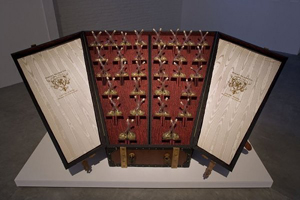 I myself was recently confronted with my own doppelgänger.  Would you like to hear my story?  Or not?  Perhaps instead you would prefer to read Roy Neinast recent review of Shawn Smith’s installation at Lawndale Art Center instead?   I will sit here until you make up your mind.

A few weeks ago I received an invitation from Inman Gallery located on Main Street near the Museum District. The invitation heralded the advent of three exhibitions, to wit, and I quote:

As I held the invitation in both hands and phonetically read each syllable aloud, my frustration grew.  “Kerry can’t possibly expect me to read all of this.  Really, its just too much, how can this possibly be Twittered ?”  Reaching the word Antoinette, I grew confused and threw my computer out the driver’s side window in disgust, barely missing a Carmelite nun.  Frustration and confusion aside, the morbid turn of Dario’s title and David’s use of French in his own, captured my imagination and once I was able to translate Marie Antoinette into the mother tongue, I grew determined to see the Inman shows.

I visited the gallery on the opening night of David’s (and Beth’s as I later learned) exhibition, Dario’s having opened a week earlier.

I have long been familiar with and a fan of Dario and David’s work.  You will remember Dario as the artist who in the early years of his career bought the vinyl recording archive of the artist Pipkins (best remembered for Gimme Dat Ding), melted the work down, reconfigured it as an 8 track, and repackaged the ensuing piece under the title The Four Songs of Peaches & Herb or Your Cheeks Have Lost Their Luster, Have You Considered Cosmetic Surgery?  Over the years, Dario’s work has grown more complex and mature, and the work on view at the temporary Inman annex is no exception.  It’s a beautiful, intelligent, technically accomplished show, borrowing forms from Victorian mourning art, and exploring themes of longing, loss and resurrection, but as I regrettably found out, is not meant to encourage audience participation.  For example, even though tempted by no means try on the widow’s weeds and above all do not take the herbal remedies.  Audiotape takes much longer to digest than one would imagine.   When and if you finally evacuate the digested remains, please be advised that the resultant mess will in no way resemble what has been touted as the sound of two hearts beating. 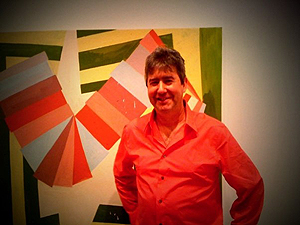 David Aylsworth, an acolyte of the Elsa Maxwell School of Economic Thought, recently began creating a series of works that illuminate his fascination with aerial interior views most closely associated with the French Revolution, such as those of the Tuileries, the Tennis Court at Versailles, the Bastille, and most famously L’Olympia Bruno Coquatrix. The photo on the right, taken the night of the exhibition, shows David standing in front of she said the lift doesn’t work, a painting depicts the spiral staircase leading to the Temple cell where Marie Antoinette spent her last days before being so brutally murdered by that French innovation most know for creating fear in the hearts of mankind, that is to say, Mayonnaise.   As always, David choice of color for his paintings and shirts are deeply symbolic, borrowing heavily from the oeuvres of Kandinsky and other like-minded individuals.  For example the orange in she said the lift doesn’t work, and that of his shirt are said to either represent a quiet, self-contained strong person who is fully conscious of his own powers (i.e. Napoleon) or a mishap while eating cold poached salmon topped with Provencal mustard sauce (Marie Antoinette). 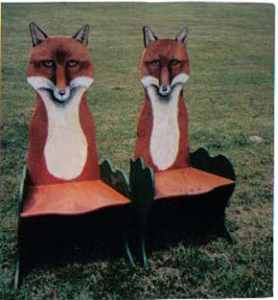 It appears I have digressed and completely wandered off the path leading to my encounter with the Doppelgänger.  As you recall, I gave up reading the entire Inman invitation, throwing it down in a fit of pique.  Arriving in my ignorant state on November 6, I was quite surprised to hear several people congratulate me as I walked toward the gallery, and upon reaching it, to see my name in foot high letters on the wall.

After getting over the initial shock, I must admit being somewhat excited, as it has been some time since the public has had the opportunity to see my whimsically rendered lion and leopard chairs, hunting screens, and dog in a suit portraits.  Rarely do I produce enough work for a show, as I also balance a life full of horseback riding throughout Africa and watching my dogs tree foxes on my farm in Cochranville, Pa.  While I am talking about myself, I must also say I am a nice person who never says a snide word about anyone, and never saw the point of sarcasm.  I mean really, what is that all about? I have always lived by the maxim, “If you don’t have anything nice to say, don’t say anything at all.” 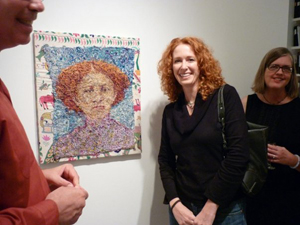 As I opened the door, a voice, quite the monotone at that, called to me from within the North gallery entrance, “Beth, Beth, come here Beth.”  It was hypnotic; really I couldn’t ignore it if I tried.  Led as though a lamb to the slaughter, I caught glimpses of the person leading the way, but oddly enough only through my peripheral vision (as one purportedly does with doppelgängers), causing me to twirl like a fairy princess as I attempted to move toward the sound.   Reaching the doorway, my entry was suddenly blocked by a phalanx of Inman employees, under the directorship of one Patrick Reynolds.  “If you have any love for life at all Beth, don’t go into the gallery!” they chanted from beneath their shields, such as a troop of Hoplites might in a similarly dangerous situation.

It was good that I heeded their advice, for as all and sundry know, viewing one’s own doppelgänger leads to immediate death.  However, I was able to peak into the Beth Secor show, but I could tell I wasn’t missing much, as it was just tangled thread imbedded with cat and dog hair, and a scribble scrabble mess of drawings.  Unfortunately anyone who has seen these has taken them as works of my own, and now my reputation is ruined forever.