by Beth Secor July 19, 2009
FacebookTwitterEmail
DISCLAIMER!  This is not a review, really, I swear it isn’t, o.k., I lied

Last week, as five of you may have noticed, I did not update my weekly column, Every Friggin’ Gallery in the Whole Damn Town.  This certainly was not for lack of trying on my part, not by any means.  In fact, if we are counting, and we are, I went to the Skydive on Montrose Boulevard twice, once to participate in an installment of their wonderful Saturday Free School and another time to see the opening of At The Seams, an exhibition in their Sisyphus Office Space. I also visited The Big Show at Lawndale Art Center.  And yes, Mr. Cranky Pants, I realize neither of those galleries is in the Heights.

If I am not mistaken, and I often am, each Skydive Sisyphus Office Exhibition is supplemented by a Saturday Free School, taught by artists, Freaky Town Kroeger employees, and Scott Gertner of Scott Gertner’s Skybar.   During the inaugural Saturday Free School, participants learned how funny it is when sackers place loaves of bread and cartons of eggs in patrons’ bags, followed by rudely tossed bottles of wine and cans of cat food.  Another equally informative Free School included Scott Gernter’s instructions on how to make sure everybody is absolutely clear on who is the proprietor of any given business. For example, Mr. Gertner did not name his business the “Soupy Sales Skybar” because nobody under the age of 50 knows who the f*@k Soupy is. 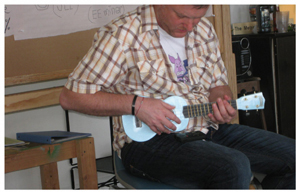 At the particular Saturday School I attended, Brett Davidson, a former Houstonian now residing in Zurich, taught a group the fine art of playing ukulele.  I am ashamed to say I did not master the ukulele, something I deeply regret, as it is the most melodic and melancholy of all instruments. Barring this, I did learn to play a single note, which from here on out I will call C Minor, an action I am taking in order to protect myself from any slander suits that may be pending from said note, seeing as how it might not call what I had done to it “playing” but rather “badly butchering”, if you will. 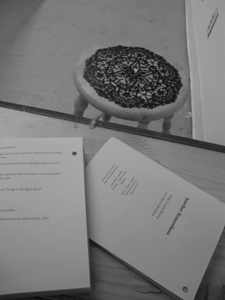 The exhibition At The Seams featured an installation by New York Artist Lynne Harlow, as well as a book of the same name, with poems compiled and written by my good friend Brett Davidson, and artistically rendered holes punched by one of the many, many assistants employed by The New York Artist Lynne Harlow. (As way of clarification, the book is not called New York Artist Lynne Harlow, but rather At The Seams.)   The opening event for the exhibition also included light refreshment (Tang and Cheetos) and a musical interlude by Brett Davidson, accompanied by the Chinese musical duo, Ying and Yang.  As you many of you know, Matthew Sontheimer and I own sole rights on the use of Cheetos as an exhibition snack.  Skydive directors Sasha Dela and Ariane Roesche will be hearing from our lawyers soon.  And then I imagine we will be hearing from theirs, and a few days later they will hear from ours, and so on and so on. 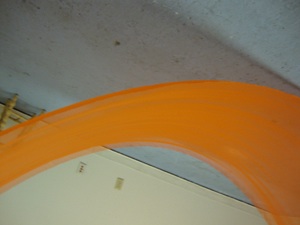 The New York Artist Lynne Harlow is known somewhere for hanging sheer fabric from ceilings and then posting bad photos of said installations on her website. She is also known for silk screening a single color onto a piece of paper, an act I would have given a student an F for, as it is Down Right Lazy, considering this assignment required the use of at least three separate stencils.   In the instance of her exhibition at Skydive, Harlow creation ripped off word for verse, I mean "paid homage" to the infamous Tilted Arc by grumpy man Richard Sera. 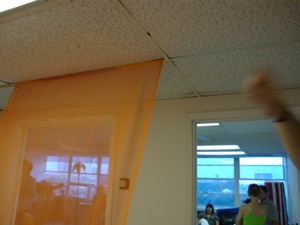 Harlow’s “grand gesture” mirrored the controversial piece in a multitude of ways, with few exceptions, and those being it wasn’t so big, it wasn’t made of steel, it wasn’t placed in the middle of a Federal Plaza, it wasn’t cut into a million pieces in the middle of the night and then stored in a warehouse, and most importantly it actually does “attract rats and harbor terrorists.”  I asked the artist what the installation, made of sheer orange fabric and gold bullion, is suppose to represent, but while she explained it to me, I quit paying attention and thought about how it is high time I vacuum out my car.

From here on out I will refer to the artist as X, so as to protect myself from- oh crap, I meant to do this earlier. 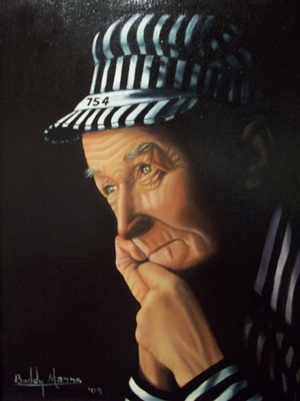 Earlier this week I took my painting class to Lawndale Art Center to see The Big Show.  I will only touch on this exhibit briefly as I did not bring along my camera, and did not think to take notes. I am a fan of this annual show, as it gives artists of various experience and skills an opportunity to show along more seasoned and established artists. While at the exhibition I experienced a moment of pride upon learning my long lost relative, M. E. Buddy Marrs was among those chosen for the juror’s choice award, a cash prize of $1000, $500 of which I am going to request as a temporary loan, to be paid back “once I get on my feet.”   However this pride soon evaporated, as upon closer inspections of Buddy’s paintings, my skin began to crawl as his images are, quite frankly, inordinately creepy.  Moments later I found myself on the floor curled into the fetal position, desperately trying to conjure up a “safe place”, – i.e. Luby’s restaurant where I am served unlimited buffet of macaroni and cheese and fried okra.  Upon remembering my high cholesterol, I then placed myself at Whole Foods, where unfortunately I was unable to pay for my salad, having failed to borrow the $500 from Buddy in advance. Luckily I then recalled the name Marrs was not that of my grandfather, as his birth name was Russell, and upon recollection, pulled myself up off the floor, saving myself from any further humiliation suffered at the hands of my students.

Next Week, a foiled attempt to visit G Gallery, Neuhaus, and Redbud!