“Six Years Later” at Unit B 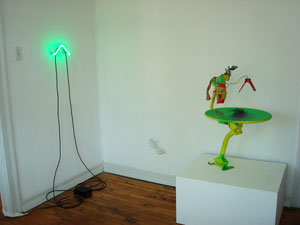 Six Years Later presents two separate shows by Matt Hanner and Stephen Lapthisophon. The artists had previously collaborated on a one-night-only installation at Unit B Gallery when it was still in Chicago. This time around, their work is in separate rooms, but the artists still play off of each other conceptually by using their contrasting approaches to art making to explore symbolic communication.

Hanner created three sculptures that reference a caret mark (^), a symbol he deems a representation of “positive thoughts and wishes for happiness.” The severe economy of the sculptures' central form is offset by a loosely elegant compositional sensibility. In the other room, Lapthisophon has strewn potatoes, salt, bricks, lumber and leaves about the gallery in a playfully poetic installation, which includes a video of potatoes doing what potatoes do (sitting around while nothing of particular interest happens to them). 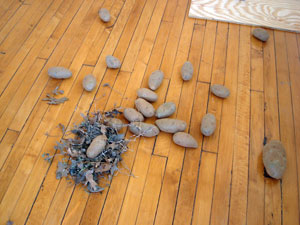 While Hanner tells us exactly what he means to convey with his symbol (which he refers to as “the 8th element”), Lapthisophon lets us gather meaning from his free-form visual associations. One potato lies in a nest, conjuring the idea of a particularly large and lumpy egg; others are scattered around as if they were stones gathered by Robert Smithson for one of his non-sites. Hanner’s symbol, rendered in three sculptures using neon, coiled metal wire and burnt incense sticks respectively, asks how materials influence meaning. We are asked on the one hand to synthesize meaning from the repetition of a simple object in various contexts, and on the other to analyze shifting signification as an abstract concept is made material. 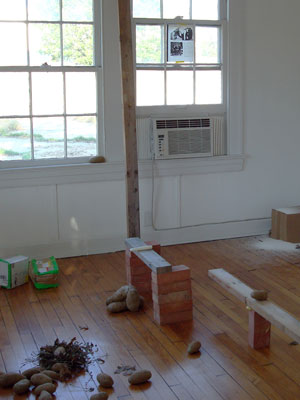 As a way of suggesting some of these connections to the viewer, Lapthisophon taped a photocopy from Lucy Lippard’s book Six Years: The Dematerialization of the Art Object to the gallery window. Lippard’s book explores the development of conceptual art in the late ‘60s and early ‘70s. On the page the artist selected, Smithson is quoted discussing his non-sites and their relationship to his conception of language. Lapthisophon’s project could be interpreted as a non-site kitchen, with potatoes, salt and a bag of rice forming the dominant elements of the installation. A 2×4 balanced on an upright brick, with a potato resting in the middle and a penny placed on one end, calls to mind the form of a scale. Meanwhile, two stacks of bricks spanned by another 2×4 could be read as a brick oven. But there’s nothing didactic about this installation and the interpretation could just as easily move in other directions: white candle wax dripped over a small pile of potatoes, with the candle itself jutting out above, reads like spilled semen and reinforces the connection between potato and egg. Lapthisophon excels at this kind of playfulness, incorporating visual puns and loose associations while mining the depths of the history of conceptual art.

The potatoes are placed in shifting and fleeting contexts, but are also transitory objects themselves, as are the leaves, flowers, scraps of lumber and other elements of the installation (which also include the boxes the artist used to ship materials to Unit B). The focus on objects and materials that are generally not valued for their aesthetic qualities allows Lapthisophon to draw viewers into a relationship with the poetry of the everyday, but also to consider the impact of conceptual art and criticism on mainstream aesthetics. The page from Six Years simultaneously serves as an echo of the title of the show, a kind of wall text and a chunk of raw material like the bricks and lumber. 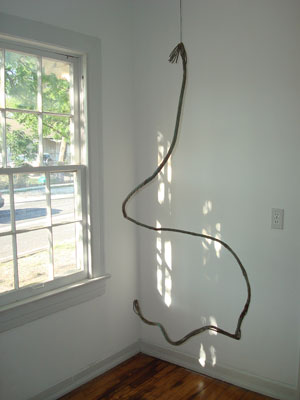 When Matt Hanner posits the meaning of his ^s in the statement for the show, he immediately takes a stance that is very different from his counterpart’s open-ended playfulness. He invokes a state of being and then sets about materializing it — at times by making an “offering” (as Hanner describes the burning of incense and fireworks, the remnants of which he used to construct one of the sculptures). This materialization of the ideal draws on an artistic impulse that is more old-fashioned, at least in the Western world, than Lapthisophon’s celebration of the transitory. But Hanner’s use of found materials and neon as well as the remnants of his burnt “offerings” connects the work to more contemporary practices.

The meaning ascribed to the ^ could be seen as a kind of ground or pedestal supporting the sculptures, but the stronger impression is that of the sculptures themselves affecting or shaping that meaning. The physicality of the sculptures could actually be seen as undermining and even supplanting the meaning of the ^ through the associations implied by their materials. Green neon, in and of itself, has a more visceral impact than the “positive thoughts and wishes for happiness” we are told it stands for when given the shape of a caret.  A thick, coiled wire rope, like those that anchor telephone polls, creates a different set of associations from the neon, despite nominally exhibiting the same form.

As Hanner moves through these materials, his “positive thoughts and wishes for happiness” come in and out of view. The upward angles of his sculptures are at odds with the irregular lumpy shapes of the potatoes resting on the floor in the next room of the gallery. Where Lapthisophon settles into today, Hanner rises into tomorrow, each artist’s use of symbols beautifully articulating a particular attitude towards time and the motion of life.

Ben Judson is a freelance writer and web designer living in San Antonio.