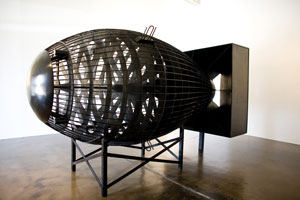 Robert Wilhite’s current show at Barry Whistler Gallery is comprised of a single sculpture: The Bomb (2008), a true to scale representation of the Fat Man, the plutonium bomb which was detonated over Nagasaki 63 years ago this August. At ten feet eight inches long and five feet in diameter, it presents a complicated visual and emotional mix of elegance and menace.

While the original bomb it is modeled after was a hulking solid (it weighed over 10,000 pounds), Wilhite’s sculpture has the physical and visual lightness of an open lattice constructed of black painted wood. It conveys something of the airiness of a child’s balsa wood airplane, while displaying the Post-Minimal, formal qualities of a Martin Puryear piece. The black wood is burnished to a quasi-metallic shine on the nose, but the wood grain is quite apparent through the paint on the tail structure. Fan-like staves inside the piece support and stiffen longitudinal ribs that describe the bulbous exterior like the lines of a cross-contour drawing.

According to gallery staff, Wilhite visited a museum of atomic weapons with a tape measure to get the dimensions and proportions right while researching the sculpture. One can imagine the potential hassles with Homeland Security such an expedition might incur, but the point here is that the accuracy Wilhite achieves in his representation casts his Bomb in terms of a found object of sorts. He didn’t make anything up. This is what the Fat Man looked like. This is how fat it was. Its shape, designed by physicists and engineers to accommodate the death-dealing “near critical” globe of plutonium and surrounding complex of high explosives crammed inside, has the form of a compromise between a sphere and the wind. And so the resonance of the sculpture’s proportions with the dimensions of the white room it occupies is all the more remarkable. Indirectly lit by floodlights aimed at the floor and the room’s corners, it casts no hard shadows – a fact which somehow makes its location in the space more emphatic and more malevolent. Hunkered down on a bland, utilitarian stand, The Bomb physically occupies only a portion of the space, but it fills the gallery.

The Fat Man was the second nuclear weapon to be dropped in anger and the third ever exploded, after Little Boy (Hiroshima) and the Trinity “Gadget,” which was tested successfully at Alamogordo, NM in July of that summer. The Nagasaki bomb thus signaled not so much the beginning of nuclear terror as its persistence. That the US had more than one city killer allegedly convinced the Japanese to surrender. The terror was not going to stop. They had to give up.

Wilhite was born in 1946, which makes him a member of the first generation to have lived their whole lives in the nuclear era and under the shadow of “the Bomb.” It is always there. And it always gets worse. The bombs get bigger, more sinister, and the numbers get higher. The Fat Man exploded with the force of 20,000 tons of high explosives. At the height of the nuclear arms race, the Soviet Union tested a device which produced more than 2,000 times the destructive force of the first nuclear bombs. How many countries are now in the nuclear club? The fear is always that their number is growing.

Topical references abound. This country is in the sixth year of a war born of the fear that a minor Middle Eastern dictator had nukes. He didn’t, but the fear was sufficient. After years of anxiety, North Korea appears to be dismantling their atomic weapons program. Then there are the recent foul ups with America’s nukes which led to the top brass in our Air Force getting canned, the low-level fear that Pakistan’s nukes might already have fallen into the hands of bad guys and the fears surrounding Iran and their atomic program.

Now that the nuclear era has nearly reached retirement age, the terror is perhaps less visible to members of the generations born after Wilhite. Civil Defense “duck and cover” drills are no longer part of children’s public school experience, nor are fallout shelters stocked with canned food and distilled water. But the dread remains. That is what got America into the second war with Iraq: the fear of “the smoking gun [i.e., concrete proof that Saddam harbored WMD’s] that could come in the form of a mushroom cloud,” as the president said during the run up to the current war.

The aesthetic force of Wilhite’s sculpture oscillates between the poles of one’s attraction to its improbable beauty and the anxiety engendered by its subject matter. Further complicating the dialectic is the fact that Americans exhibit a strong attraction for things of terrible power. This is particularly true among those with the least personal power, which adds a degree of poignancy to the reference to a child’s model airplane in the piece’s construction. While the desire for power and the desire for visual pleasure are very different things, that they have come together in a single object represents quite an accomplishment.

okay…The Gadget was tested at the “Trinity” test sight, at what is now the white sands missile range. this location was picked because it’s in the middle of nowhere. Not Alamogordo, that just happens to be the closest town to where the bomb was detonated.