Although the majority of the paintings in Jill Moser’s first solo show
at Wade Wilson Art (for that matter, in Houston) are from a series
she’s titled stills (2005), they are anything but. They fairly hum with
energy. 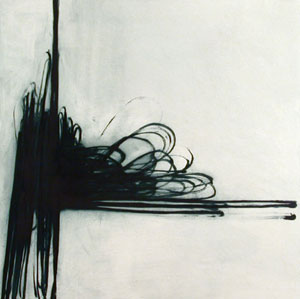 They are at once spare and lush, packed with activity, yet possessed of a quiet calm. In some, lines shoot down from somewhere above the top edge of the picture plane or in off the side, and then dervish around the space of the painting before seemingly returning the way they came if they can’t find some new, adventurous path off that plane. In others, the lines seem more an act of spontaneous generation with no obvious point of origin. The areas of figuration that the lines define don’t sprawl across the canvas either: they’re concentrated, tightly wound in one or two areas of the painting. One thinks of hummingbirds or dragonflies, energy hovering in stasis, for a corollary (and it’s a pretty lame one) to these dynamic abstract compositions.

These paintings, along with two from a new series, are something of a departure from her work of the past decade or so. Circular shapes, piled upon one another or intersecting and abutting, dominated much of that previous work. This led critics to emphasize an organic reading of her paintings and drawings, seeing biological cells, rocks, pond ripples, planetary orbits or suggestions of feminine pulchritude (I, myself, in notes made 12 years ago used words like “helix” and “ovate”). But for Moser it’s always been about line, while the rest of us forgot that you can’t have circles until you connect a series of arcing — um, lines. This new body of work, arising out of a series of drawings made about two years ago, schools us in the folly of our misreading. 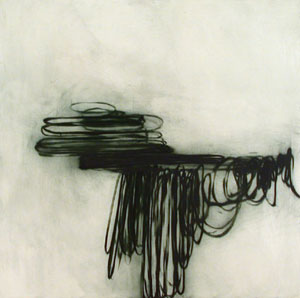 Moser was born in 1956 and grew up in the environs of New York City. She reports that she took full advantage of everything that city had to offer — the museums, the galleries, the repertory film houses — before heading off to Brown to study what she says would today be considered cultural theory, under the auspices of the anthropology department. She graduated in 1978, but not before picking up a brush. Back in New York, a short-lived program at the Brooklyn Museum gave her studio space for a year before she began graduate work at Hunter College, earning an MFA in 1981. She’s taught at the State University of New York, New Paltz, at Princeton and at the School of Visual Arts in New York, among other institutions, as well as holding several visiting residencies. She now lives and works in New York City.

Though Moser’s career began in the 1980s (the first group exhibition listed on her CV is in 1983; the first solo show, 1987), her work, current and prior, isn’t of that decade, a period when the New York art world realized that the death of painting had been greatly exaggerated and began promoting the works of Jean-Michel Basquiat, David Salle, Julian Schnabel, Francesco Clemente, et al. Instead, her paintings, drawings and prints keep faith with the process artists of the 1970s, people like Eva Hesse, Alan Saret, Dorothea Rockburne, William Anastasi, and Marcia Hafif, to name a few, artists not usually associated with painting who, in their time, were seeking ways past the two opposing poles of the previous decade, minimalism and pop. When in the interview in the accompanying catalogue Moser talks about mark-making as a self-fulfilling activity, one of discovery in which “the image is active in the process of describing itself,” and speaks of her process as improvisatory but not random, she echoes the concerns and interests of those earlier artists who concentrated on mark-making as well, improvising and experimenting with the process of making art in an attempt to get back to the basics as an escape from preconceived notions of what art had to be. 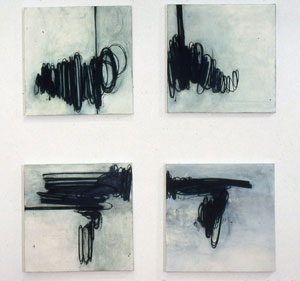 Moser also talks about the physicality of painting, how it forces a slower, more methodical action than drawing. One knows this intuitively — knows, for example, that Cy Twombly’s “chalkboard” paintings were not made the way a child might loop chalk lines on a blackboard. But they read that way, and Moser’s paintings read similarly. That’s where some of the pleasure of these paintings is realized, in the tension between the deliberation of execution that the mind recognizes and the exhilarating speed of the line that the eye insists upon. Moser found her own solution to the problem of speed of execution versus the deliberation imposed by paint and canvas by using extended brushes to distance herself from the canvas. This brings a performative aspect to her practice and gives her present images a fluid quality that is not characteristic of her earlier paintings. In addition, traces of pigment negotiating between figure and ground, either palimpsests of reconsidered brushstrokes or deliberately, yet delicately, feathered applications, contribute to the sense of motion. (It was an instructive exercise, after visiting the artist’s New York studio, to spend the following afternoon wandering among the more static — beautifully, contemplatively static — paintings in Brice Marden’s retrospective at MoMA.) 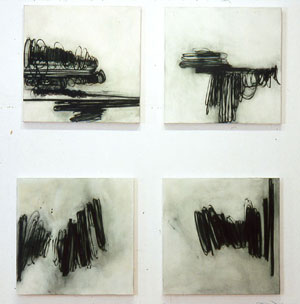 Along with the dark green, densely rendered stills, Moser has also brought to Houston trickster and dreamer, both blue and both from 2006. (Are you picking up on maybe an e.e. cummings thing here, with the lower case titles? I’m not saying, I’m just asking….) They are slightly larger than the stills series and are somewhat more loosely composed, the figures more expansive and not as tightly wound. In trickster, three overlapping horizontal loops extending to the right off an otherwise vertically oriented figure suggest a whirligig; a similar multiple-looped gesture, this time on the left side of the composition, might indicate how dreamer acquired its moniker. These two paintings are the vanguard of her next series, and they’re a fine beginning. 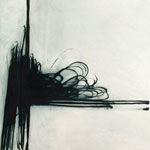 that’s some bullshit, copyin’ twombly with less panache. they look better in photographs but they are some real boring ass shit.

This gallery and show is pathetic. Wont go any more–it’s just some tired and bored white elitists with too much time and nothing to say that hasn’t already been said ad naseum…

After reading your thoughtful and, I’m sure, quite heartfelt comments, I’d like to invite you to come to my gallery one more (last?)time and speak with me face-to-face so I may gain some insights into your foregone conclusions about my gallery and its exhibit of beautiful Jill Moser paintings. In return, I will share with you my own insights about this exhibit, my gallery. and the artists whom I represent. Perhaps, then, I might shed some light on our purpose to help you better understand what we’re trying to do at Wade Wilson Art.
I look forward to our visit, Sukifunk.
Sincerely, Wade Wilson

you are both too dramatic…….

Jill moser’s show was badly hung….! It is hung as though the work is all one installation….Is this supposed to be painting or drawing?? If i could buy the whole series then ok….But who can afford that…
Kome-on kids this has nothing to do with Twombly!!! nothing!! Twombly is bad enough……Moser is not a painter…this is drawing……at least CY is a painter…..?

are we all blind