Darryl Lauster would seem to have his finger on the pulse of the Houston zeitgeist right about now. 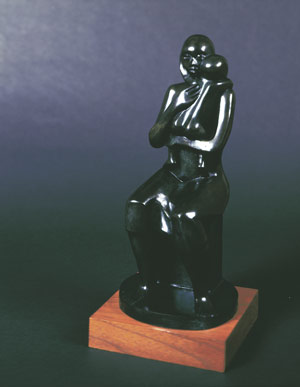 Installation shot from the CAM.

Darryl Lauster would seem to have his finger on the pulse of the Houston zeitgeist right about now. On a single night in June, he opened in two group shows: one in the gallery of the Cultural Arts Council of Houston/Harris County, marking his receipt of a CACHH grant in the last year, and the other in the Contemporary Arts Museum Houston’s Four Artists, Four Stories, curated by Paola Morsiani. Then in July he completed the hat trick with a display of recent work at Devin Borden Hiram Butler Gallery (he’ll be showing there again in October). About the only thing he missed was the mayor’s handing him the keys to the city and proclaiming Darryl Lauster Day. But the attention is both well deserved and well invested. Over the last several years, Lauster has emerged as one of Houston’s most thoughtful artists.

Like so many of us in this sprawling metropolis, Lauster is a transplant, having grown up in rural southeastern New York. He came to Houston via San Diego, where in 1995 he earned a BFA from San Diego State University. He then came to the University of Houston for his MFA. He currently teaches at Houston Community College’s Northline campus, where he is also in charge of programming for the gallery, and he lectures in the Honors Program at the University of Houston as well.

Even though all the sculptures that constitute Lauster’s contribution to Four Artists, Four Stories are recent, some of the pieces provide a summation of his interests and concerns of the last five to six years. In one part of the gallery, Cast Federal Parlor Chair (2006) sits next to Table Based on Isamu Noguchi Design (2005), with Vessel to Calder (2005) atop it. The titles for table and urn suggest that the works are intended as hommages to two of Lauster’s precursors in the field of sculpture; the table could be a Noguchi knock-off, while the porcelain of the neoclassical vessel frames space cut in the shape of one of Calder’s signature mobiles. But what about that chair? That, too, is a hommage, this time to the furniture makers of the 18th and 19th centuries, the craftsmen who shaped wood into tables and chairs as aesthetically pleasing as they were functional. Cast in sandblasted polyester resin, the parlor chair lacks cushions, thereby denying its function and urging the viewer to focus on its form. Similarly, the tribute to Calder turns the eye back to the almost serpentine shape of the wooden table beneath it, leading viewers to consider its sculptural integrity and the beauty of its material. 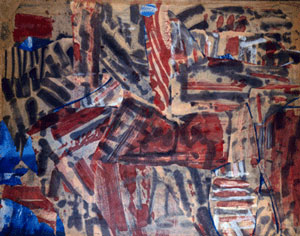 Obviously, Lauster’s work shows affinities with certain minimalist ideas in its insistence on the integrity of the object, but it should also be obvious that he is not interested in abstract forms removed from the world. He is drawn to forms that people recognize, that have meanings and associations — that is to say, a history — attached to them, associations that he can exploit to redirect the viewer’s attention. This is most apparent in the commemorative plates that Lauster has recently been casting in porcelain; they comprise two series, one brown and white, and the other blue and white (he exhibited the blue and white series at CACHH and at Devin Borden/Hiram Butler Gallery). The designs on the rims of the plates are taken from 19 th-century plates made abroad in Great Britain or China for export to the burgeoning American market, plates that typically incorporated views of, say, a harbor that was intended by the manufacturer to be understood as an American harbor. Or they might feature other designs seen as quintessentially American, flags or eagles, and thought to appeal to patriotic feelings. Lauster was intrigued with this notion of a young nation’s seeing itself through the eyes of foreign merchants — of Americans literally buying into an idea of ‘American-ness’ marketed by non-Americans. And that notion suggested to him a series of plates commemorating the real American experience. His plates are silkscreened with images culled from the collections held by the National Archives and the Library of Congress, and together they explore the full panoply of American history. Yes, Kitty Hawk and the Wright Brothers are here, but so is Mysterious Fliers who thrilled a gathering of the Ku Klux Klan, 1924. There is Suffragists Marching in NYC, 1913, as well as a photo of their opposition’s storefront headquarters in National Anti-Suffrage Association, 1911. There are immigrants at Ellis Island, protesters (against child labor in 1909, for veterans’ payments in 1932 and for civil rights in 1963) and Native Americans (a burial platform, a store at Wounded Knee). There are soldiers being mustered out of service at Fort Dix, New Jersey, in 1918 and Japanese prisoners of war, naked on the deck of the USS New Jersey in 1944 where they are being bathed, clipped and deloused. (Lauster says he was working with the latter image as the Abu Ghraib scandal broke — the zeitgeist again!) And there is the daredevil posing with the barrel he rode over Niagara Falls in, a barn raising in New York and the building of the Galveston sea wall, not to mention Richard Nixon posing with Elvis. 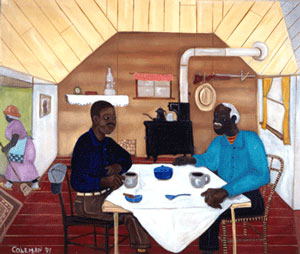 One of the plates

But note the relative lack of Great Moments, the general absence of the VIPs of politics or commerce (though Jesse Jackson and Malcolm X make appearances). Lauster has little interest in any Great Man theory of history. His allegiance is to the aggregate crowd and to the anonymous face in that crowd. These plates commemorate those who have made this country what it is, who have defined, for better or worse, what most of us recognize as ‘American.’ Lauster reminds us that ‘American-ness’ is a collective — and continuous — achievement, one that’s far from complete and so is, by definition, indefinite.

The commemorative plates are something of a hommage to the millions of anonymous individuals who’ve played a part in the history and contributed to the identity of the wonderful, terrible, fascinating, confounding, exhilarating, maddening grand experiment in self-governance that is America. Lauster here brings the same attention to craft — each of the plates must be fired four times, a labor-intensive process — that he brought to his earlier hommages. So his recent summer in the sun is not so much attributable to his tapping into the zeitgeist as it is a testament to the elegant clarity of his work: an art of simple form, conceptual integrity and abiding intelligence. 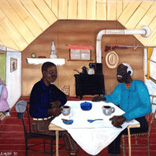