by Tristan Fabriani June 14, 2005
FacebookTwitterEmail
2005 marks the 400th year anniversary of Don Quixote, Mr. Fabriani composed Our Man Menard in 1991 in anticipation of this event. 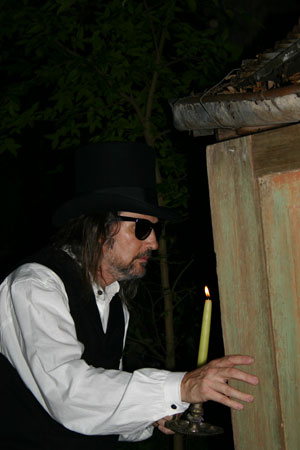 In his story, Menard, Author of the Quixote, Jorge Luis Borges quotes a letter from his character Menard to Borges, author of Menard:

Vladimir Nabokov, author of Lectures on Don Quixote, tells why:

In the evolution of literature the seventeenth century novel — especially the picaresque novel — had not yet evolved consciousness, conscious memory permeating the whole work, when we feel that the characters remember and know events that we remember and know about them. This is a development of the nineteenth century. [Cervantes] never saw his book in front of him as a perfect composition, standing aloof, completely separate from the chaos of the matter from which it had grown. [2]

Other than the widely agreed upon status of Don Quixote as “the first” novel, why did Borges choose Don Quixote around which to build this narrative of Pierre Menard? One reason is that the set-up is already there: Cervantes’ tale supplies several invented historians who then in turn produce various parts of his narrative. One of the chapters of Don Quixote, which Menard successfully writes is the ninth, in which one of these made-up fellows, Cid Hemete Benengeli, is introduced. It is his “translation” that we read when we read Don Quixote and we are told this by yet another individual who has discovered Benengeli’s work.

There are also plenty of bibliophilic references in both Borges and Cervantes. At one point in the early chapters of Don Quixote the Don’s housekeeper burns all his books (including an earlier book written by him, The Galatea) and his library is walled in; and of course he wants to know why he can’t locate any of the books or even the room they were kept in. This mirrors Cervantes’ own apparently actual seventeenth century habit (according to Nabokov) of forgetting Don Quixote as he wrote it. Cervantes has absent-mindedly introduced the idea of the palimpsest (or something like it) and Borges (or someone like him) has loaned it to Menard, who writes:

My general recollection of the Quixote, simplified by forgetfulness and indifference, can well equal the imprecise and prior image of a book not yet written. [4]

Then Borges, Menard’s archivist, informs us that Menard has

…reflected that it is permissible to see in this “final” Quixote a kind of palimpsest, through which the traces — of our friend’s “previous” writing should be translucently visible. Unfortunately, only a second Pierre Menard, inverting the other’s work, would be able to exhume and revive those lost Troys… [5]

And Menard continues (in a letter to Borges):

Thinking, analyzing, inventing are not anomalous acts; they are the normal respiration of the intelligence. [6]

These lost Troys (inhale) are the pages upon pages of revisions undertaken by one Pierre Menard or another in an attempt to compose Don Quixote, but they also serve (exhale) to remind one of Ulysses, who when asked his name by the Cyclops, replied, Noman; and that the monster, subsequently blinded and screaming in agony, answered the panicked inquiries of his allies with the phrase “no man is killing me.” So, accordingly, no aid was forthcoming and maybe our man Menard is really no man Menard and inversion/invention are two aspects of the same thing.

Borges’ reference to a second Pierre Menard suggests another element which can be placed next to the palimpsest as we unearth the materials from which this allegory of no one is constructed: the double. Near the beginning of the story we are presented with a lengthy list of them, including the following:

1) A symbolist sonnet, which appears in the same review twice; in March and October, 1899. This is a symmetrical, reflective arrangement as these months are each the third month respectively, from the beginning and end of the year.
2) A poetic language made up of two mutually exclusive concepts, the ideal and the conventional. (The ideal exists outside
history and therefore can have no convention with which to conform.)
3) Mention of three philosophers: Descartes, Leibniz and Wilkins. The list reverts to the form of the double with the next item on the list, which includes only Leibniz and eliminates him from both sides of the equation by mentioning him in each item.
4) A proposal about chess and the subsequent rejection of said proposal.
5) A reference to the Boolean system of logic upon which the computer (the brain’s double) is based.
6) A reference to the “metric laws of French prose” and mention of an article refuting the existence of such laws.
7) The problem of Achilles and the tortoise: one can never get from point A to point B because each distance remaining to be traveled can always be halved.
8) Censure and praise — surely the one and zero of literary criticism.

Meanwhile, palimpsest and double can be found in other examples of Borges’ writing, including this one, which seems to combine both:

Through the years a man peoples a space with images of provinces, kingdoms, mountains, bays, ships, islands, fishes, rooms, tools, stars, horses and people. Shortly before his death, he discovers that the patient labyrinth of lines traces the image of his own face. [7]

It is as if they are stars in a buddy movie, The Palimpsest and The Double, two mechanisms set loose in the community to repeat and displace
time, maybe even get to Borges’ fourth dimension as found in The Garden of Forking Paths, in which alternate versions of space/time coexist:

José Ortega y Gassett describes the reality within (or without) reality effects of Don Quixote and describes what could be a prescription for movement within Borges’ fourth dimension:

Along a conduit of simplemindedness and dementia, emanations come and go from one continent to the other, from the puppet show to the room, from the room to the puppet show. One would say that the important thing is precisely the osmosis and end-osmosis between the two. [9]

The reference is to movement back and forth between different realities, and as end-osmosis is a process through which a fluid flows toward a
denser fluid, it can be said to be directional. So perhaps it becomes important to know which way are we flowing, from Menard to Borges or
from Borges to Menard. Or maybe Ortega, even unintentionally, is treating us to a pun on the relative density of fools and our various
abilities at getting across. Either way I’d still like to know what the partition is.