Viewing A Spirited Vision: Highlights of the Bequest of Caroline Wiess Law to the Museum of Fine Arts, Houston, the thought occurred to me: it’s always nice to see how the other half lives. 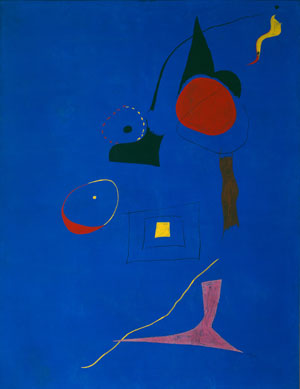 I’m not being flippant. When I lived in Philadelphia in the 1980s, the PMA mounted a similar exhibit after trustee Henry McIlhenny’s death, and it was possible to imagine, as you walked through the exhibit, what it must be like to live with Renoir’s Mlle. Legrand, an exquisite portrait of a young girl in a deep blue and white frock (one of the few Renoirs that I like), in company with, to name just a few, an Ingres, a Van Gogh, several Degas, and (another favorite) a droll, beautifully executed drawing of Harpo Marx, with a lobster on his head and a tongue laying atop the harp he’s playing, by — who else? — Dali. It was a heady experience, picturing myself in the drawing rooms of McIlhenny’s Rittenhouse Square townhouse. Now those works – and the rest of his bequest — have been integrated into the collection and the colloquy they held about their late patron, the portrait that they provided, is lost. They’re having other conversations now.

So unless Ms. Law, who died last Christmas Eve at 85 (in a rare symmetry, on her birthday), stipulated how her collection is to be displayed — and I don’t believe she did — this may be the only chance one will have to view these works together and hear what they have to say about their sponsor. A Spirited Vision contains about 40-some works, while the bequest comprises 54 works valued at between $60 million and $85 million, with an additional $25 million endowment going toward the museum’s operating funds and to add to its holdings. The exhibit is mounted at the east end of the mezzanine of the Brown Pavilion, in the building named for Ms. Law, overlooking a group of German Neo-Expressionist paintings from the 1980s, several of which the museum acquired through her largesse. To say that her relationship with the museum was profound would risk understatement.

Caroline Wiess Law was born in 1918, the second daughter of Harry C. Wiess, a founder of Humble Oil & Refining Co., now ExxonMobil. She graduated from Sarah Lawrence College in 1941. Her first husband was William Francis, a partner at the law firm that would become the Houston power broker Vinson & Elkins, and he died in 1958 while serving as Assistant Secretary of Defense in the Eisenhower administration. Two years later, she married her second husband, Theodore Newton Law, founder of Falcon Seaboard Drilling Co. and of Mid-Continent Airlines. Before his death in 1989, the Laws bought the city block on which now rests the museum’s Audrey Jones Beck Building. In addition to the MFAH, Ms. Law was a generous supporter of the Houston Ballet, the Houston Grand Opera, the Houston Symphony, as well as Baylor College of Medicine and UT’s M.D. Anderson Cancer Center, both of which will receive $25 million from her estate. 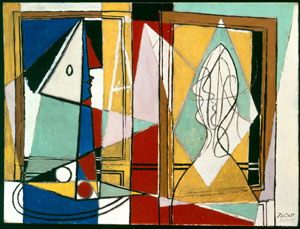 Ms. Law began collecting in the 1950s. Art dealers, perhaps making some amusing assumptions about class and gender, brought her a slew of Impressionist paintings, but, she said, “They didn’t talk to me.” Then an intrepid gallerist from New York rented a convertible, tossed Picasso’s 1927 Two Women in Front of a Window in the back seat, and drove all the way to Houston to bring it to her door. It was love at first sight, and Picasso became her favorite artist. This instant love affair established that her eye was drawn more to abstraction and to bright colors (looking around the collection, she seems to have had a fondness for orange — it shows up often enough). But, just as the above anecdote indicates an independent streak, she didn’t necessarily indulge her proclivities, either.

If she sought works that spoke to her, another guiding concern was how a work might fit into the museum’s holdings. Apparently she always intended her collection to join those holdings and so she acquired works like Penumbra, from 1959, one of Adolf Gottlieb’s Burst paintings, to complement a painting from his earlier pictograph series already belonging to the museum. Similarly, whereas previously the MFAH hadn’t any de Koonings, they now have three, including a lovely black enamel on paper, Black and White (Rome), from 1959, that I might have taken for a Franz Kline if the artist hadn’t signed it. Speaking of Kline, Ms. Law possessed three good ones. The vibrantly austere Corinthian II, from 1961, hangs at a right angle to the de Kooning, and comparing the paint handling in the two is instructive. The enamel paint in the latter is allowed to spot and almost pool in places, while the Kline is all swift, energetic strokes, done with the sureness of a master Zen calligrapher. That same energy appears in the vertical Red Brass, from 1955, and the hugely horizontal Orange and Black Wall, from 1959, two fine examples of the relatively rare paintings in which Kline used color (the latter admittedly appearing to be in serious need of conservation). Joining the museum’s Wotan, from 1950, the MFAH now has a fine group of mature Klines. 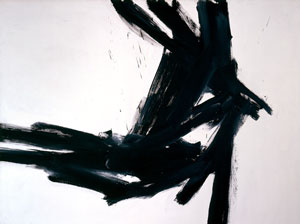 Other works in the bequest fill in gaps in the museum’s holdings, while taking you on a short tour of 20th century art. Joan Miro’s Painting (The Circus Horse), 1927, a gemlike example of the Catalan surrealist’s deft line and dynamic color, is the first of his paintings to enter the collection. Two works by Arshile Gorky, a painting from 1937, titled Composition, and a drawing from the Nightime, Enigma and Nostalgia series of the early 1930s, are also firsts for the museum’s holdings. The museum also now has three of the most interesting Hans Hoffmans I’ve seen, joining the fine earlier one they already had. Blue Monolith, from 1964, is just that, comprised of broad swaths of color; by using lighter to darker shades and by carefully arranging horizontal and short diagonal over predominately vertical strokes, Hoffman creates the pleasurable tension of peering into a water-filled grotto, part enticement, part apprehension. Nearby, Sunflowers, a large, dense painting by Joan Mitchell, from about 1989, belies its title, with a background of violet strokes and a foreground of jabbing black strokes, and, in between, a field of green and orange vying gamely for attention.

With all this abstract painting, especially from the New York School, a couple of statues by Roy Lichtenstein come as a real surprise. After all, only now, six years after his death, are his sculptures beginning to get attention. But Archaic Head VI and Galatea, 1988 and 1990 respectively, are very Picasso-esque, the former reminiscent of his late drawings, the latter echoing earlier paintings, such as the 1932 Girl Before A Mirror, which was seen here recently in the MoMA show. Doubtless, that was part of their appeal for Ms. Law. But they also point to another guiding principle to her collecting, one that may have been subliminal, and helps to explain why this exhibit, despite its wide range of styles across the better part of a century, feels so unified. The artworks that spoke to her, at least as represented by these highlights, have a sensuous quality. The rhythm of the single bronze line of Galatea, the strong, expressive gestures of Kline, the curvilinear abstract shapes of the Gorkys, the bright colors throughout — these aspects of the works gathered here speak to an aesthetic based more on sensation, a visceral reaction to a painting or a sculpture, than on connoisseurship. Such comprehension presumably would come later, through living with the works and contemplating them in the day-to-day. When a work of art first spoke to Caroline Weiss Law, she heard lyric poetry, not prose. 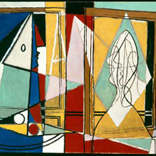 Many years ago I worked for mrs. Law to this day I cannot believe that I got to spend time with this Splendid art collection I visit the museum as often I can as I don’t live in Houston anymore. When I visit I cannot believe it was me amongst all this art I miss mrs. Law dearly. Mister law treated me like family God bless them both