Oscillating with the Philosophy of the Ocular

Entering the barrel vault of the main entrance to the Dallas Museum of Art, one is struck by the intelligence with which the current offering of sculpture is arranged. 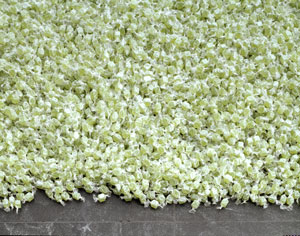 On the right is Donald Judd’s untitled piece of minimalist greatness; six double boxes strictly marching up the wall until the interiors are out of sight. Cast aluminum, of course, and clear greenish yellow Plexiglas. My lack of fondness for Judd is mediated by the fact that this is undoubtedly one of his best shelf expressions. The fact that the interiors of the shelves are out of sight at the top give it some metaphysical heft, unlike the more common type of Judd, which always brings to mind the phrase Billons Served. Facing Judd’s piece is a sculpture of delicacy and weight that expresses a similar sentiment in a more engaging way. Anish Kapoor’s dark violet void doesn’t threaten to swallow up the viewer. It’s more toothless maw than black hole; saved by how much it pays attention to its own attractiveness.

In the center of the gallery hangs the most humorous sculpture in the show, Luciano Fabro’s one-ton marble cloud called Efeso hung from a steel cable and lit so that a double shadow falls on the floor beneath. The area below the sculpture isn’t taped off, so you can stand underneath it. I took it as a Plato joke, but sadly when reading the wall tag it seems that Fabro was being serious when he offered this up. I still think it’s a Plato joke or at least a Damocles joke.

Bruce Nauman’s neon sculpture Perfect Door/Perfect Odor/Perfect Rodo satirizes the commercialization of the sublime. Nauman uses the edict of Longinus (from the sublime to the ridiculous), positing that our numbing need for novelty turns a superlative that sounds good (Perfect Door) into something that still makes sense, but is becoming unstable (Perfect Odor) to something that makes no sense (Perfect Rodo). Even though shifting the letters around doesn’t change the valance of the equation Perfect X, it negates its meaning. The work is a critique of the pseudo-change in formalism, and is also Nauman’s specific definition of the commercial. 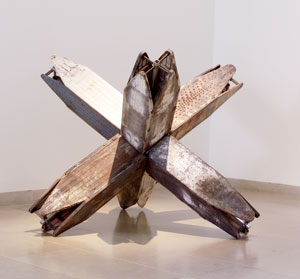 The remaining two pieces are poetry of witness and constructed meaning. Willie Cole’s excellent object made of found ironing boards arranged in a geometric configuration nicely shows the duality between the cube and the octahedron, while suggesting the opposing element of the wrinkles ironed out on the boards. The whole expression from a distance looks like a giant jack, and evokes a game-playing god juxtaposed to the women whose work is never done. That Cole is African American merely adds more layers to this fine piece of the 20th century.

Doris Salcedo’s impossibly violent penetration of concrete-filled furniture at right angles would be sentimental if it were not for the reality of her Columbian nationality. There is a certain resignation to this piece — as if the crimes are irrevocable — that is disturbing beyond anything else in the show. There is no sublimation, or suggestion of anything but endless night, and a kind of don’t-you-dare-go-out-after-dark gothic quality that evokes the silent denial that makes Columbian political violence the worst in the world.

Charles Ray’s spinning disk is a serious object of wit. Set flush into the wall, the white disk spins at such a speed that you can only tell that it’s spinning by the whirring sound. (A picture of this sculpture would be useless.) Ray has managed to make a work where the sound is unselfconsciously part of the complete design. Ray’s comments add to the expression instead of subtracting from it, and it’s the one of the few times a wall text actually enhances our enjoyment. The sculpture’s combination of satire about the artist’s constant search for the difference that makes a difference and its comment on speed as a contributing factor to our lack of attention to one another is what makes Ray’s work iconic for so many artists following in his fecund path. Ray’s expression is empty and full, distracted and focused, banal and profound, all wrapped up tight around a rueful, but still smiling, indestructible core.

Many of the other sculptures in the show are worthy of mention, though the minimalist room is tired and drifts into nihilistic aggression. The Mathew Barney piano piece from his film Cremaster 3 is good enough, though I saw it in its natural environment at the Guggenheim and it loses something when viewed in isolation. This is not true of all the pieces by Barney, as there is a translucent table full of restraint drawings covered with a yellow faux fungus (in Howard Ratchofsky’s collection in Dallas) that stands completely on its own, with no need of a supporting cast. 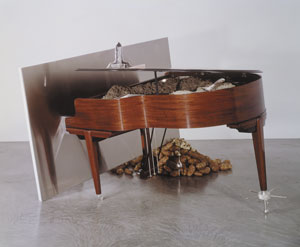 The Felix Gonzalez-Torres translucent green candy carpet is placed at such an odd distance from the main rooms that it’s difficult to realize that he is part of the show, to say nothing of part of response to negative strict father morality that has been with us at least since Kant. Gonzalez-Torres” permissiveness is tempered by the fact that he is offering you candy. He implicitly explains the consequences of the unrestricted Yes while Judd ignores your human need for warmth and comfort, explicitly wishing you’d just drop dead.

The Gonzales-Torres conceptual work could have been switched with the less-compelling Charles Ray steel and concrete construction, so that a perceptive person could perhaps become conscious that the two characters played by Matthew Barney and Richard Serra in Cremaster 3 (often derided as Freudian embellishment to the film) are a retro-Gnostic answer (Barney) to an heterodox answer (Gonzalez-Torres) to an puritanical answer (minimalism) to a decadent answer (Warhol’s Pop) to a elitist answer (Greenberg’s valorizations) ad infinitum, oscillating and copulating with the strange, attractive philosophy of the ocular that reproduces to this day.

This show comes down in at the end of April. There is an unfortunate caveat that two of the best sculptures the DMA owns are being held hostage in the back of the horrendously over-installed 100 Treasures/ 100 Years show and you’ll have to pay a $10 more to get into see the Chris Burden, All the Submarines of the United States of America and the LED extravaganza Counter Ground by Tatsuo Miyajima.

Mark Babcock is an artist and writer living and working in Dallas. 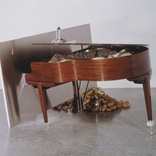