It’s hard not to like Phoebe Washburn’s behemoth installation at Rice University. But why?

Trash-repurposed-as-art, the-ugly-made-beautiful, garbage landscapes and a recycling aesthetic — start describing Washburn’s shows in generalities and you’re describing something awful. Haven”t we seen this before? Didn”t we hate it the last time?

Behind the millions of small throw-aways that constitute Washburn’s True, False, and Slightly Better is one enormous conceptual throwaway: the resurrection of the discarded and superfluous in the new-and-improved form of art. It’s an idea that’s probably good for you, and not bad for more nuanced exploration, but all alone it isn’t much more loveable than aluminum cans or packing crates. It’s an idea that Washburn throws away with supercool detachment. She says it best herself in the show’s brochure: ‘someone once described my process of collecting, painting and organizing the cardboard as making the cardboard only slightly better,” she says. “I loved that. It is very basic yet the most crucial part of my work.”

This detachment makes Washburn’s pile of trash so much more enjoyable (as opposed to lofty) than a Thomas Hirschhorn pile of trash. Washburn isn’t materialistically needy like Hirschhorn. The value of her work isn’t reliant on the totemic/fetishistic power of its audaciously humble elements. Her trash doesn’t moralize; her use for a soapbox is aesthetic and formal. The boxes are refuse, stolen from recycling routes — but this doesn’t matter. The paint that brings color to the sheets and lends the piece a near-digital appearance comes from rejected hardware store batches — but this doesn’t matter, either. Because Washburn takes on her mission casually, she’s not bound by rigid and/or arbitrary processes. True, False, and Slightly Better wouldn’t suffer much if it were constructed from virgin cardboard. On the contrary, it gains a lot from Washburn’s idiosyncratic additions: the empty boxes of screws, the ladders, the bags of cement, and a wedged-in yellow pencil. There are apparently no formal rules at play that can’t be broken. Additions that don’t immediately make sense seem to serve as proof of Washburn’s hand.

The defining trait of the piece is its most casual and most additive: its beautiful, organic form. True, False, and Slightly Better is elegant and un-self-conscious. It has the intricate and massive presence of a tidal wave or a mountain range. Its colors and curves feel complicated beyond the effects of human decision-making — the product of something algorithmic. And yet, its shape feels very much like someone’s shape, and its colors feel very much like someone’s colors. For an installation so massive and uncorrectable, it’s strikingly personal and handmade. 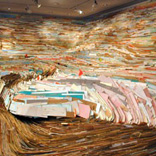 True, False, and Slightly Better is a giant standing on skinny legs, both in its form and its conceptual roots. While the charm of its physical precariousness is unavoidable, once you’ve discarded a pat trash-or-treasure read of the piece, you’re left only with Washburn’s gestures. Washburn communicates in disconnections and has as much to say with what she lets go of as she does with what she keeps. She carries the big ideas of her work like an auditioning actor packs a monologue: as a starting point, a reason to perform, and a way to show her virtuosity. The ideas themselves are not forgotten, but they’re only part of the act — which is why synoptic descriptions of the installation fail. Pressing the monologue analogy: as a good actor brings to life a role rendered meaningless by familiarity, by the grace of her gestures and the genuineness of her idiosyncrasies, Washburn has created something larger and more vital than its worn-out origins.

David Harrison is a writer and photographer living in Houston.