The Quilts of Gee’s Bend

The marriage of obsessive craft to rote form in quilts usually sends me screaming from the room. Why then have I been back to see The Quilts of Gee’s Bend four times? I can’t pin it down, exactly, but this show is closer in spirit to contemporary art than a lot of the stuff I have been looking at recently in galleries and museums. If you want to productively upset your expectations, this is the show for you. 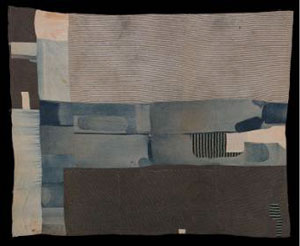 Gee’s Bend is a small community tucked into a five-by-seven mile oxbow of the Alabama River, southwest of Selma. This land was once a plantation owned by Joseph Gee, hence the name. The Gees sold to Mark Pettway in 1845; many remaining Gee’s Bend residents, descended from former Pettway plantation slaves, bear the Pettway name. Many continued to work the land as tenant farmers after emancipation, buying their farms as part of a New Deal-sponsored repurchase program in the 1940s. Outlasting slavery, and isolated by geography and segregation, this African-American population developed a sense of group identity that it carefully nurtured from generation to generation. 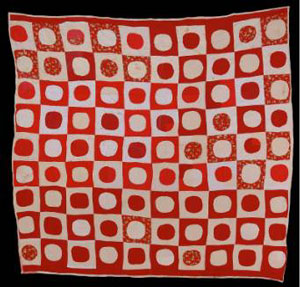 This sense of clannishness — of an outgroup making their own way — is one of the most appealing things about The Quilt’s of Gee’s Bend. But the show’s staying power stems from the fact that its constituent parts read as a coherent aesthetic instead an assortment of patterns and styles. The Gee’s Bend quilters are edgy and innovative in their design strategies. You won”t find many perfect pinwheels here. In fact, you are more likely to think comparatively in terms of Kenneth Noland, Ellsworth Kelly, or Ad Reinhardt than the historical traditions of American quilting. Only one quilt is presented in its original bedroom context. Instead, the MFAH’s installation reinforces artistic associations by placing the quilts, unstretched and not safely tucked behind glass, like paintings on walls usually reserved for European masterworks. 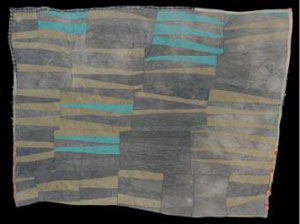 Gee’s Bend may have been isolated, but it wasn’t exactly nowhere for black culture, as the Jacob Lawrence painting of the same name makes clear. By the time of the Civil Rights Movement, it had become something of a symbol; Gee’s Bend mules pulled Martin Luther King’s coffin wagon. The earliest works in the exhibition, made by artists born in the 1870s and 1880s, date from the 1930s — a decade before Lawrence painted his painting in 1947. The most recent, by artists born in the 1950s, were made during the past ten years. The majority of the quilts, however, date from the 1960s and 1970s. Because they are so reductive in design, these works suggest obvious parallels with another clannish group of artists practicing at the same time. Both Minimalism and Gee’s Bend began practically (Gee’s born out of slavery, Minimalism as an ideological rejection of Greenbergian formalism), and each thrived as outgroups. Both pared away detail to reveal elemental structure, marrying process to form as the basic emblem of a human signature. Each drew inspiration from what was close at hand (the log cabin, the modernist grid), making variations on those essential forms the hallmark of an individual artist’s sensibility.

Both groups rehabilitated humble, discarded, nontraditional materials into their work, as a practical response to their environment and as a statement of their difference. Lucy Mooney, Rachel Cary George, Missouri Pettway and the other “workclothes” quilters reinvented their husband’s worn denim field clothes, mattress ticking, and cotton sackcloth every bit as effectively as Robert Morris and Richard Serra incorporated the lead, felt, steel, and fabric they found in their initial expeditions into Soho warehouses in the 1960s. While overtly abstract, Minimalism was infused with the politics of the antiwar movement, with artist protesters reading manifestoes on the steps of the Metropolitan Museum. In a similar way, the Civil Rights and Black Power movements are the pivotal subtexts for the artists of Gee’s Bend, with voter’s ribbons, daishiki cloth, and the Gee’s Bend Freedom Quilting Bee cooperative as physical manifestations. 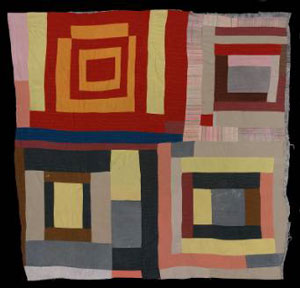 But the 70 quilts by 45 artists that comprise The Quilts of Gee’s Bend were not made to be art, of course. Most were made as items of use, for family members or as gifts, and as such were conceived as private rather than public documents. The former Houston gallerist Janie Lee recently reminded me of the vehemence of the initial rejection Judd and his compatriots experienced when they first showed their works in Texas. The Gee’s Bend quilters may never have suffered gallery rejection, but many were involved in commerical ventures. The Freedom Quilting Bee cooperative made a short-lived foray into commercial production for Bloomingdales in 1969, which came to naught when buyers complained that the quilters should cease improvising and reproduce patterns consistently from one quilt to the next. On the other hand, their contract with Sears to produce corduroy pillow covers had the practical side effect of introducing a new material into their repertoire, resulting in some of their best work. But the hands-on, first person obsessiveness of quilting is very far removed from the designed-to-be-fabricated aesthetic that permeates Minimalism. And the clannishness of Gee’s Bend was based on community and kinship (20 members of the Pettway family, spanning five generations, contributed quilts to this show), rather than the physical and philosophical proximity that connected Donald Judd, Richard Serra, Robert Morris, and Robert Smithson. That last list suggests another difference. One group is exclusively female, the other predominantly male.

The importance of the Minimalist trademark, seriality, to the Gee’s Bend aesthetic is captured in the show’s litany of repeated quilting styles — Housetop and its variant, Log Cabin; Roman Stripes, One Patch, Lazy Gal. Each could easily become dogma if not for the emphasis Gee’s Bend quilters placed on breaking the “rules” of a particular pattern. Among the many highlights of this show, the borderless or irregularly bordered designs of Martha Jane, Loretta, and Arlonzia Pettway, Polly and Mary Bennett, and Annie Mae Young particularly impressed me. Encompassing theme and variation in exactly the same way a Judd box incorporates plan and object, or a Flavin light sculpture fuses form and color, their objects, like all of the work in this show, recharges the lexicon of art in terms that are strictly personal.

The Quilts of Gee’s Bend was organized by the Museum of Fine Arts, Houston and the Tinwood Alliance, Atlanta. The exhibition remains on display at the MFAH until November 10 before traveling to the Whitney Museum of American Art, November 27, 2002-March 2, 2003. 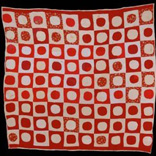