There is resistance to Paul Horn’s art. I know because I resisted it too. I remember skulking around the UH studios a while ago and seeing his plastic cereal bowl with a lopsided pool of frozen acrylic resin sloshed to one side. In its illusion of water, half a dozen very tiny human figures were swimming. In my gut I felt power and magic but my head, and probably my mouth, said No. Not a plastic bowl. It may not last a thousand years. No. Not acrylic resin. I’ve seen too much resin art already. No, not those little plastic figures. He didn’t make those; he just BOUGHT them somewhere. 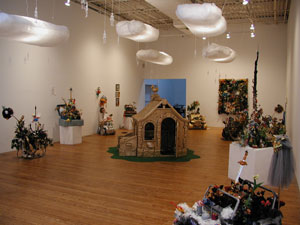 Most of all, I thought No to assemblage. Its been done so much, how could it be special or important? People get converted to Paul Horn’s art. Some piece grabs them and the connection is so powerful, all the good reasons to resist just get shaken off. It happened to me at the Friendly Mart show. Horn organized a group show inside a functioning, open-for-business convenience store; interspersing his art and that of his friends with the products on the shelves and walls. Context, and how it controls meaning, is one of the ugly problems that competent artists ignore these days. The white cubes they’re expected to decorate tend to suck the life out of any art one puts there. To choose instead to put art in the context of, and in competition with, the objects we really care about — consumer goods — and to solve all the logistical problems necessary… the art-word I would use for that is GENIUS. 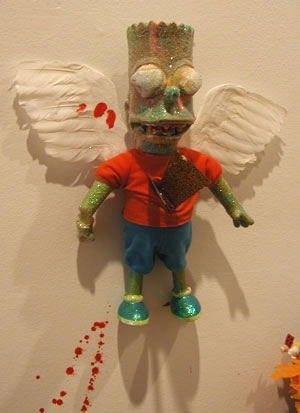 The Million Dollar Hotel also impressed me. Another group show, spread out through a dozen rooms on the eighteenth floor of the I-59 Holiday Inn. One night only. Art objects substituted for the contract schlock that decorates hotel rooms, the hideous, expensive crap one finds wherever corporate budgets secrete their version of human comfort. The evil genius of it seemed to go over many heads. They said the crazed partying overshadowed the art, you couldn’t see the art! They were so upset it wasn’t a white cube. My take was — when real people are in a hotel, partying, drinking, dancing, gambling, doing drugs, fucking, puking, passing out, and they glance up at the painting or the knick knack that happens to be there — Paul Horn wants to have made that thing.

I was ready for anything when Horn had a show at Texas Gallery, one of the nicest white cubes in the city. Let me record the fact, lest it be obscured by future events, that for Paul Horn to have a show at Texas Gallery was just about as unexpected and amazing as his having shows in a convenience store and a Holiday Inn.

The new pieces are much larger than anything else I’ve seen by him, 3 to 6 feet in any direction. The intimate scale of his art when it played a supporting role has been blown up to something more appropriate for center stage. The most striking pieces are built around Power Wheels, plastic cars big enough for kids to get in and “drive”. Now they’re being driven by big heaps of Paul Horn phantasmagoria. There’s a similar treatment of a sleigh parked there. Then there were a few strange pedestals, cardboard boxes painted white, providing a mildly parodic support to sculptures that didn’t have wheels — stacks of suitcases, a pirate-y treasure chest, a delimbed Christmas tree. The middle of the space was occupied by a gold plastic playhouse big enough to get in, sitting on a patch of astro-turf, full of Death American-style, surrounded by clouds that used to be the gallery’s light fixtures, now shrouded in white cloth and dripping tiny white skeletons. And there was a wall mounted piece, crazed assemblage spilling out of a massive gold frame.I had little resistance to the power of these pieces. I was relieved that bigger scale involved incorporating bigger objects, rather than just having extended stretches of small stuff. There’s a spectrum of busy-ness in Horn’s work. At one end profusion engulfs everything and dissolves the piece into a formless mass. At the other end, which I prefer, the profusion gives way to sparser combinations, with fewer objects forming more coherent images. This show leaned heavily toward the coherent. The teeming mass of things was subjugated to its various containers. There were the big profiles (a silver car driven by an impaired gorilla-head on a spike), and the telling details (tiny figures on a dewy leaf inspecting pushpins).

I had little resistance, but there were things I could”ve done without: two pieces based on children’s beds, a Playstation. These seemed to be attempts to turn the art gallery into…something else. But there was no need. And then there was the weird ersatz Warhol painting of Austin Powers, quite disconnected from everything else. I didn’t like it and I was afraid it might therefore be the future.

Assemblage. The very assisted readymade. So very many things all glued together. But not just anything. Horn isn’t a garbage artist. He doesn’t process every material thing that crosses his path. This show confirmed for me how very specific his choices are. The same things are used over and over, which proves he’s not finding, he’s seeking. The same things over and over – skeletons and werewolves, disembodied hands, wrecked ships, superheroes, snowy forest scenes, seashells. Burnt buildings and fast food drinks. He must be buying — everything looks new. The show made me aware that we live in a moment when the readymade is available in incredible variety and quality. It’s a great moment for an assemblage artist to seize.

Max Ernst seized a moment when he created his collage novels out of the etchings that illustrated his parents” magazines. Rauschenberg made the combines out of junk only fifties and sixties New York City could”ve discarded. Time has made their materials both exotic and nostalgic, but when fresh they must”ve seemed so wrong to so many. Today, Horn shops at Michaels and Toys R Us and gets similar responses.

When I get in close to look at the endless stuff, I get an effect I’ve come to love. Each image I focus on leads me to another to which its attached, and my eye zips down sequences, through incredible disparities in scale, subject and style. Parts are subsumed into passages by coatings of black or gold paint, or powdery glitter. A hand juts out of nowhere, proffering a hamburger on which some innocent kittens play, and on top of one of them, Jesus is dragging a modified cross, past a bag of fries and a small blue bear. Its hilarious, thrilling, profound. It captures something about the way our minds work, the way they jump from one thing to another, the way everything is connected. No subject is so complete that something new can’t begin on top of it, and no image is so sacred that something ludicrously profane is not part of it.

So many meaningful things jammed together. The pile-up both levels meaning and tends to start generating the Big Themes. One gets the feeling, just as with the vast disarray and confusion of existence itself, that somehow it all adds up to something. Death is everywhere. Half the works feature winged, mutilated Bart Simpsons, hovering over the confusion like miscast Virgils. Skeletons proliferate, figures are impaled and skewered, faces bleed. “America blew up” the artist explained to me, ” and everything landed on spikes.” But billion-footed life is also crawling through these disasters, in the flowers and foliage, the caterpillars and butterflies, the lions and bears, the seashell packed with ice and tiny cold drinks. “The fast food places got demolished and stuff grew out of the rubble.” The big themes of life and death, life from death, are embodied. A worm crawls out of a rose. Flowers spring out of a skeleton with Mickey Mouse’s head.He’s not the first to strip-mine the latent mythic content of American artifacts, not the first to refine it into some personal cosmology. What’s special about his work is that it’s done with such true abandon. Childish and boundary-free, these constructions sing about their uninhibited creation. I suspect that for many people these are the very qualities that make them hard to accept.

Paul Horn just doesn’t seem to have that anxious moment between conception and execution. After I gave up my resistance I was able to appreciate what a rare gift that is.

Images courtesy the artist and Texas Gallery.
Mark Flood is an artist living in Houston, Texas.