Los Angeles has a way of transforming its non-native inhabitants into its most articulate chroniclers.

German filmmaker Billy Wilder became one of the most daft and deft raconteurs of American mores after coming to Hollywood. The Chicago-born, England-raised writer Raymond Chandler found his true calling once moving to L.A., where he perfectly captured southern California’s lazy, hazy summer days and the cold, sinister nights of its mean streets.

Likewise, Ed Ruscha is quintessentially if paradoxically a Los Angeles artist par excellence, and it’s a feeling that Editions at the Austin Museum of Art reveals, even if you don’t know his background. Ruscha’s vibrant palette and highly stylized works percolate with a glossy aura that has become the emblematic look of Los Angeles” sunny sheen. Walking into the exhibition may make you think of Robert Frank‘s 1950s photography that documented the Beat’s migration from east coast to west, only this time, people are noticeably absent, leaving nothing but the buoyant edifices, pools, office buildings, roadside attractions, and other sundry material monuments to command your attention. 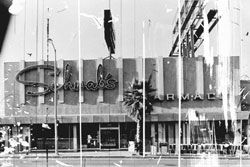 It’s a greeting that mimics Ruscha’s own journey west. Arriving in L.A. in 1956 fresh from high school in Oklahoma, the Nebraska-born Ruscha encountered a city in a state of artistic flux. Only two years previous, Walter Hopps organized the Action I exhibition at the Carousel on the Santa Monica Pier, which was one of the first shows of West Coast abstract expressionism. And while Ruscha attended the Chouinard Art Institute en route to becoming a commercial artist, Hopps and Ed Kienholz were in the process of forming the Ferus Gallery, which became a hot spot for new artists. But fine art called Ruscha, not commercial — though he never forgot its vocabulary — and he began making a name for himself with his paintings, collages, and printmaking and became involved with the Ferus group, which also included Robert Irwin, Edward Moses, and Ken Price.

Editions, which was organized by Minneapolis” Walker Art Center, follows Ruscha’s career from his earliest days to his current, and arguably most arresting, works — though his 1960s output remain some of his most recognized. His iconic images of an emerging, colorful Americana such as Standard Station (1966) and Hollywood (1968), with their bright palettes and diagonal compositions, caused critics to place Ruscha squarely in the service of Pop art. Even when he coyly subverted that enterprise with works like Cheese Mold Standard with Olive (1969), or toyed with text-based imagery, he was stuck with the Pop tag. That movement and all its trappings immediately comes to mind as you move through the first part of the exhibition, until you encounter his witty The Los Angeles County Museum of Art on Fire (1965). This seemingly innocuous image resembles a colorful, architectural illustration that’s disrupted by the towering flames and billowing smoke pouring out of the left, rear quadrant of the building. Too socially aware to be Pop per se, too camp to be a wry twist on social realism, the work is the first clue in Editions that lets you know that Ruscha’s enterprise is entirely his own. 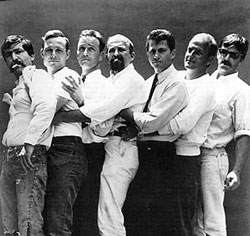 Nevertheless, Ruscha’s associations with the “L.A. look” and “West Coast Pop” by the close of the 1960s were enough to encourage him to move toward a more expansive, but no less engaging, territory in the1970s. Shirking painting, he embraced a visually dynamic and process-intensive approach that captured the mundane objects that surrounded him. It allowed him to pit them against one another in his compositions: witness the cascading puns of the screenprint-with-lacquer-overlay Sweets, Meats, Sheets (1975), which conflates visual and verbal meanings until the only thing that’s left is a purely visceral response. Still, critics felt such antics were a central conceit of Pop — riffing on the everyday in a high/low culture dialog — as well as indicative what would become that `70s show, conceptualism.Editions doesn’t try to lead you into any one reading of Ruscha’s works, and that may be its biggest drawback. His 40-plus year career often predicts or contradicts au courant American art tides from the 1960s to the present, and the hesitation to situate his work in a historical context can mislead visitors not fully aware of what was going on when. Organized chronologically and thematically, the show does commendably demonstrate that Ruscha is not an artist who doesn’t suffer from a lack of ideas, and one who is skilled in many different media.

It’s a quality that makes you realize that Ruscha was more than a West Coast Warhol. In fact, Ruscha has more in common with the variegated, constantly evolving career of Gerhard Richter, another artist who has always dabbled near the boundaries of movements proper but who’s output is always the distinct result of a very personal universe. (If Ruscha’s work seems a bit more accessible and humorous than Richter’s, don’t forget: Richter’s German.) Ruscha has never embraced the celebratory glibness of Pop or simply stated mixed mannerisms of conceptualism. He admittedly has always been in tune with popular culture’s slang and mass-market consumerism, but those elements have always been something he’s used; it’s never been the sole focus of his vision.

This idiosyncratic touch better reveals itself in the section of the exhibit that deals with his 1970s work, but his Pop star status began to wane as that decade came to a close, its fashions flitting as furiously as gas prices. Fortunately, artists in the 1980s reexamined the tensions that exist between visual and verbal language, a theme Ruscha had already explored, often with much better results, than anything produced during the “me” decade. He responded with yet another phase shift that continues into his most recent work. He started by abandoning text as his chief visual component in favor of small abstraction, and has arrived at a “really real” realist style that’s perfectly suited for an age when the belletristic metafictions of Don Delillo, Dave Eggers, and David Foster Wallace rule contemporary fiction. His works from this portion of his career — especially his large-scale mapscapes and mountain vistas — are the most impressive of the entire show, and make Editions a must see for anybody interested in witnessing of one man’s breathtakingly endless reservoir of creative activity. Such a restless mind may cause any artist’s energy to wear out eventually, but one thing’s for sure: Ruscha’s talent never will. 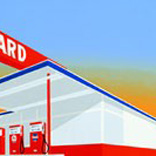