“What did you find that was most surprising?” Michael asks me. We’re on the car ride back to Houston, concluding a weekend trip to Salado to help clean out his late grandmother’s house.

“Probably how many bluebonnet paintings she had,” I answered. Nanny — as I knew her — was a very classy woman, and I hadn’t realized her house was so filled with Texas kitsch.

Despite not having known her for very long, I felt a deep connection to Nanny, like our own particular kinship. I spent my first holiday with Michael’s family at Nanny’s elbow, helping her prepare the marshmallow-topped yams, making sure she wasn’t tidying up the kitchen alone, and watching hours of HGTV together. During Fixer Upper’s commercial breaks, she told me about growing up in Kentucky and going to college in Berea, a full work-study school where the students paid their way in campus jobs. Her first work assignment was in the candy shop, standing and making candy in a hot attic all day. She hated it, and upon informing the work study office that she would like a different job, she was promptly transferred to working as a classroom custodian, which she loved. Nanny came by her gumption honestly: at the age of five, she’d tagged along with her older brothers to school each day, even though she was too young to attend. Every day, the schoolteacher kicked her out, but she kept coming back until the teacher agreed to let her stay. Nanny told me stories about the summer she waitressed in Maine, until college graduation when her friend Geno wrote her a letter and asked her not to go so far away. By the end of that summer, they were engaged.

I wear that engagement ring. Before Michael had told anyone in his family that he intended to propose to me, Nanny had called Michael’s mom out of the blue to say that she wanted to give her engagement and wedding bands to Michael — she thought he might need them.

But on this trip, I glanced around her slowly emptying house. Every room had a bluebonnet painting. Above a blue, gold-studded leather chair hung a gold-framed print of a rolling valley that levels out to a distant vista. The valley is carpeted in bluebonnets interspersed with Indian paintbrush. It is the Platonic form of a Texas bluebonnet painting. 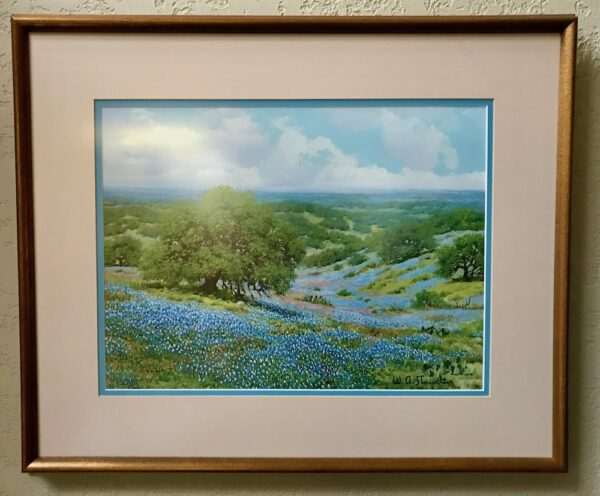 There’s another in the hallway, this one with more creative license. It’s a blowsy watercolor, tufts of bluebonnets persisting in a forgotten field, with one post of the rotting, barbed-wire fence having fallen. The entryway hall boasts matching frames of a diptych of bluebonnet bouquets. The guest bedroom features the most modern iteration: a flat illustration of a bluebonnet plant in bloom, with an emblem of the Texas flag on the mat. Nanny had an eye for color as scripted by 1970s interior design principles, and all these bluebonnet paintings complement the bluebonnet-colored carpet throughout the house. 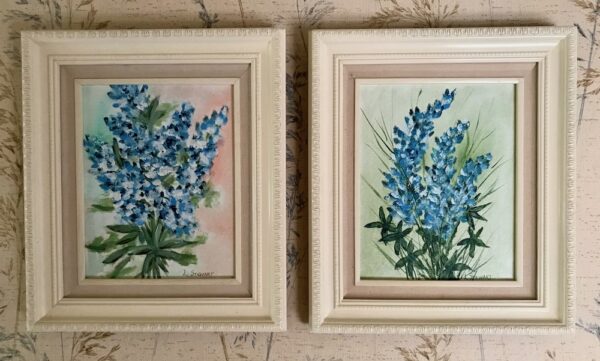 When I look at these paintings, I think of the woman who grew up in a vastly different setting — coal country, Kentucky, in a holler called Turkey Creek where Michael remembers finding chunks of coal on the side of the road during childhood visits. This woman moved to Texas with her Air Force husband and diligently made a home for herself here. She was determined to love Texas, kitsch and all. 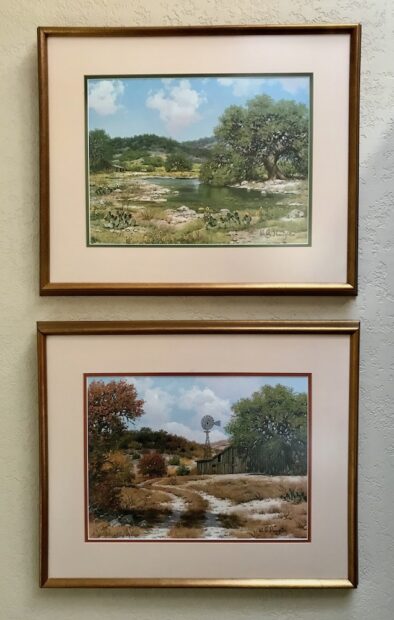 The bluebonnet paintings weren’t the only décor in Nanny’s old home. An antique Austrian weighted clock, hung next to the exposed brick chimney, loudly ticked and chimed every hour. The clock was surrounded by three framed watercolor vignettes of Switzerland, mementos from the trip to Geneva for a conference where Geno presented new medical research. At 6-foot-5, Geno had worked as a fireman in the work study program at Berea, studying biology so he could join the Air Force as a pulmonary physiologist. Certain traces of his medical career remained in the house: a four-volume Medical Reference Library housed on guest room bookshelves, alongside Nanny’s manuals in needlework and one shelf above the collection of Churchill’s writings. 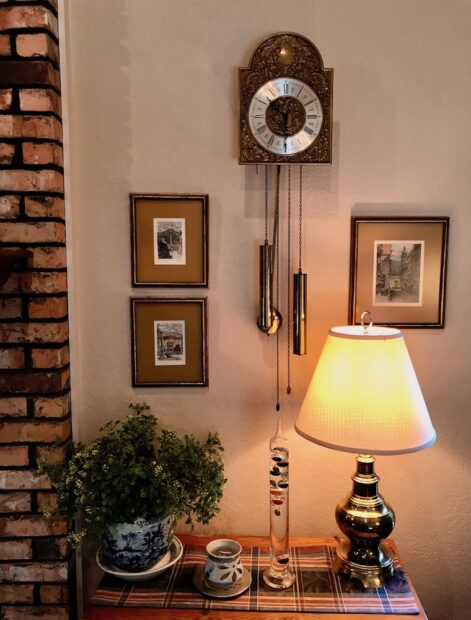 On the other side of the clock was a rocking chair which Michael’s mom suggested I keep. “You’ll need it for when you have babies,” she said. She would love to be a grandmother as soon as possible. Cleaning out Nanny’s house with my mother-in-law, setting certain items aside keeping in mind my hypothetical future children, was like a study in intergenerational legacy. What are the items, the ideas, and the expectations, that we hand down — especially as women?

“I wonder how many liquor bottles we’re still going to find hidden around this house,” says Michael’s uncle.

“I’m sure Nanny’s found every last bottle of vodka,” says Michael’s mom. Nanny had never liked alcohol, and over the years, watching her husband drink more as his body served him less, she grew more and more resolute in her opposition. She didn’t pass this distaste for alcohol onto her daughter, so we stayed up late each night, drinking buttery chardonnay and telling more stories.

What are the secrets our elders take with them, and what secrets do our families leave behind? Estate sales fascinate, but the objects don’t speak. They refuse to reveal their proprietary knowledge, the intimate scenes they’ve witnessed.

We spent hours going through Nanny’s dresser and closet, trying on fantastic old clothes. We found gaudy Christmas-themed watchbands interspersed with gold tennis bracelets and boxes of clip-on earrings (Nanny never pierced her ears, but she understood the importance of being fully dressed, including accessories). We threw out a whole drawer of L’eggs, pantyhose iconically packaged in plastic eggs. The deeper in the drawers we went, the older the pieces were, until we found an elaborate five-part set in blush pink, gauzy robe all the way to flounced petticoat. “This must have been her wedding night set,” said Michael’s mom.

As we carted years of shoeboxes out of a narrow closet crowded with golf shirts, Michael lifted down a plastic bin coated in so many layers of dust that his handprint appeared a different color. We opened the bin to find a trash bag, and then looked in the trash bag to find a pillowcase stuffed with cloth. “It’s just sheets?” Michael asked, dumping out the contents, which unrolled to reveal nylon netting.

Michael’s mom gasped. “It’s Mom’s wedding dress!” Slightly yellowed with age but otherwise in mint condition, the dress was the picture of 1950s nuptial loveliness: sweetheart neckline, delicate short sleeves, and a full tiered ballgown skirt that tapered into a lacey train. The back of the dress featured a trail of immaculate silk buttons and button loops, simultaneously conjuring allure and restraint.

“Try on the wedding dress!” Michael’s mom urged me. It didn’t button, but otherwise fit like a glove, and we found ourselves in a strange role reversal: me in the family wedding dress that Michael’s mom regrets not wearing, and her wearing one of her mother’s wigs, and  looking more like her mom than herself.

Being in Nanny’s house, trying on Nanny’s clothes and sorting her trinkets, surrounded by the trappings of motherhood, I thought about expectations and constraints, the way that women are shaped by our environments and sometimes dictated by them. Nanny was, by all accounts, an ideal wife and mother. We found a printed photograph of the General of the Air Force base awarding Nanny an oversized pepper grinder, occasion unstated. Nanny is shaking the general’s hand and receiving the pepper grinder with the other hand, smiling towards the camera, short hair perfectly pressed into pin curls. Michael and I have inherited that pepper grinder.

As I carried an armload of long dresses and wool coats out to our car, Michael’s uncle says that Michael and I must be destined to have a little girl someday. All these clothes will come back in style and then she can wear them. That’s one possibility, among infinite possibilities. Maybe she’ll discard any implication of the heteronormativity latent in these clothes. Maybe I won’t have a little girl. How can I manage my expectations and hopes for the future while simultaneously navigating the expectations handed down to me?

Cleaning out a house is a series of decisions: lifting up what someone else deemed worthwhile and deciding whether or not it needs to be carried forward. That’s the same process of navigating expectations, assessing what traditions and assumptions have been handed down and deciding if you want to carry them forward. I still have so many questions. When she decided to give Michael her rings, did she know they were for me? What other expectations did she wrestle with? I want her to tell me the story of her and Geno again. I want her to tell me what she loves about all the bluebonnet paintings.

We didn’t finish packing up the house. Sunday afternoon, Michael and I loaded into our car whatever we could fit – plastic bins filled with heirloom crystal, wrapped in Geno’s old shirts, china teacups wrapped in socks. How do you clean out the substance of a life? How do you do it in the time of coronavirus, when death is too rampant, when separation is mandated, and these family convenings aren’t widely possible?

Coronavirus has robbed us of our rituals of grieving, our ways of assimilating the past into the living present. That’s what Nanny was doing with the bluebonnet paintings: trying to translate her connection to the Kentucky hills into a well-cultivated love for the hill country of Texas. She died a Texas woman, while still a girl from Kentucky. Wife, Mother, Teacher. The epitaphs carved in stone can never sum up a life, any more than a collection of bluebonnet paintings can at a wordless estate sale.

I read every word and then reread the essay. It was beautifully thought out and even more beautifully written….

Beautiful, heartfelt writing. Thank you for this piece!

That was a lovely read and tribute to past, present, and future.

One of the best articles I’ve read here. A lovely memento to this woman and her life shaped by marvelous writing. Thank you.

This old man misses his Mama terribly, every day. Reading this article sweetly grounded my thoughts tonight and hopefully re-wired me to get rid of as much of my junk now as possible. I have no bluebonnet paintings but I do have my own equivalents of such. Thank you for this splendid article.

Such a beautifully written story — personal insights interwoven with artifacts and tender words of memory, trigger thoughts of similar times in my life. And quite possibly will motivate me to begin that daunting task of distribution of my art, supplies and assorted sundries.

My grandmother (Yarrell) from the Salado area had almost identical bluebonnet paintings. And a whole collection of clip-on earrings.

As we all ponder what it means to live and to die, this is such a beautiful reflection on how lives touch one another. Thank you!

“How can I manage my expectations and hopes for the future while simultaneously navigating the expectations handed down to me? ” THIS. Thank you for sharing.

That was great. As a childhood friend of your mother-in-law and Uncle, I loved glimpsing into her past. Michael was so right in asking you to wear those rings.
I recently emptied my own mother’s home – while she was relocated to a condo – and I wish I had had someone like you there with me.