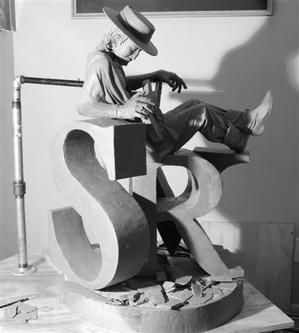 The Dallas Park Board approved a new statue honoring Dallas natives and blues brothers, Stevie Ray and Jimmie Vaughan for Kiest Park in Oak Cliff, near the brothers’ childhood home. Blues guitarists, the brothers grew up in Oak Cliff, and made it big in Austin in the 70’s, but Austin’s already got a statue: Stevie Ray Vaughn,by Ralph Helmick, was installed in 1994 in Auditorium Shores Park beside Ladybird Lake.

Stevie Ray Vaughan, who was killed in a helicopter crash in August of 1990, and his band Double Trouble, will, not conincidentally, be inducted into the Rock ‘n’Roll hall of fame today in Cleveland , Ohio.

The Oak Cliff Foundation (the philanthropic arm of the Oak Cliff Chamber of Commerce), which will contribute partial funding for the project, has already raised $68,000 of the project’s total budget of $142,000. The remaining $74,000 will come from from the 2006 Bond Program for  public art projects in parks. The Dallas Parks Press release says that a call for artists will be issued this summer, but San Antonio artist Victor L. Rangel’s clay model of a proposed statue, roughly quarter the proposed size, was displayed at the Kessler Theater during last year’s “blues and barbecue” event to kick off fundraising for the project.

Where’s the damned guitar. Do you think any damned Texas Blues Man worth his salt wants to be portrayed without his weapon of choice? Hell No!

His hands are resting on it. Hard to see, because it’s in the shadows…