Louise Blouin seems to be in trouble these days. Her reputation as an employer is so clouded that when the CEO of Blouin Media, publisher of Artinfo.com and Art + Auction, called a snow day yesterday, Dan Duray of the Gallerist suggested that it was simply because it was payday and, since Monday is a holiday, the company could avoid paying its employees until at least Tuesday.

The snow day came only a day after Blouin and the company president were served with lawsuit papers, filed by two former top executives who claim that they were fired after complaining about missing paychecks and commissions. A Blouin spokesperson said “there were disputed commissions that did not belong to them, and that is why they were terminated,” but the lawsuit claims that Blouin explained to other staff members that the plaintiffs were “greedy,” “evil,” and “stole” money, clients and commissions. The New York Post reports that the two plaintiffs are among a number of former Blouin staffers who have left to join Artnet News, a digital publication that aims to compete with Artinfo.com.

Blouin’s reputation as a fair employer has been nose-diving for a while now. Last month, C-Monster Carolina A. Miranda, freelance arts writer, launched a relentless Twitter campaign called #BlouinShaming: 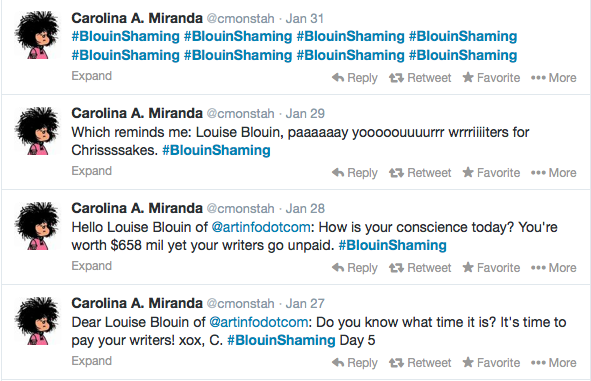 The two plaintiffs also charge that, despite many years of service at Blouin Media, they were classified as independent contractors when they should have been classified as full-time employees. It should be noted that all Glasstire writers are part-time freelancers, which, as Glasstire contributor Laura Lark explains in her recent article “The Lark Guide to Artworld Behaviors,” makes it “not a ‘real’ job, but then here is a little bit more of that sentence (the all caps are hers):

…it really boils down to money—and though Glasstire PAYS ITS WRITERS BETTER THAN ANY PUBLICATION I’VE EVER WORKED FOR, it’s not a “real” job…

Court Ruling on Art Estate Taxes Could Save...