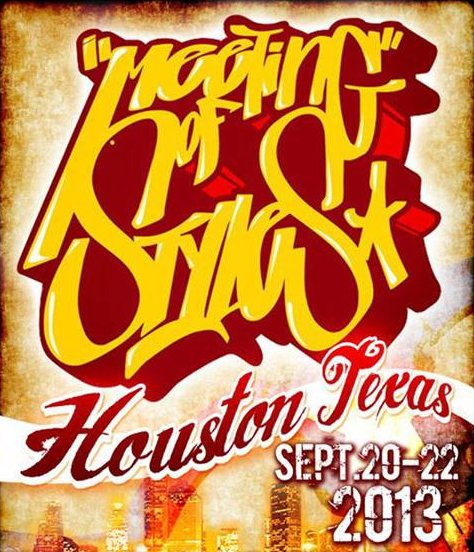 UP Art Studio’s one-day pop-up show of graffiti art on Friday night was truly a pop-up, since the call for artists only went out 48 hours beforehand. More than twenty artists participated (and most of the works should still around for viewing for a few weeks). The event seems like a crazy feat to pull off, considering that UP is also hosting the kick-off party for the International Meeting of Styles (MOS) on Thursday, September 19.

MOS is an international network of graffiti artists that began in Wiesbaden, Germany in 2002. Since then, it have launched over 75 events across Europe, Russia and America, where street artists from across the world come together to meet each other, exchange ideas, and show off their skills. MOS Houston will take place at Kingspoint Graffiti on September 20-22. Among the expected 150-175 participating artists/writers are FX-Crew Pose2, Per, Mack (Tats Cru), Hef, Muse, Such, Deck, Pilot, Sloke, Graffiti Piñatas, RZM, Cazo (Germany), and Fabio (Brazil). For more information, contact MOS Houston.

This has been a very great event. Looking forward for more events like this. Two thumbs up for the organizers of this graffiti event .